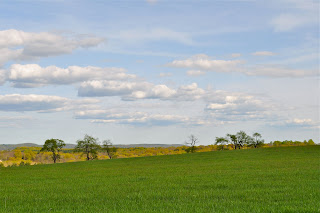 Oh the sweet pastel landscapes of spring! The trees in the foreground, it can be seen, are badly damaged. 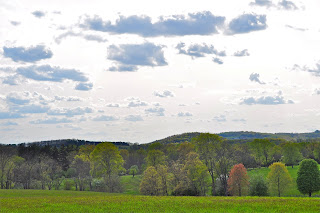 A significant portion have yet to leaf out. Some of them will of course, but I suspect a noticeable number will remain bare. And then those that do will begin to wilt, even faster than last year. And many will fall. 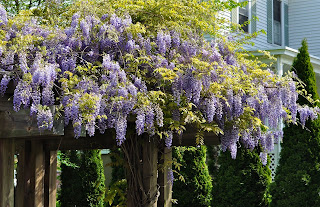 I came across this beautiful arbor of wisteria. Like everything else, they're blooming about 2 weeks earlier than normal. 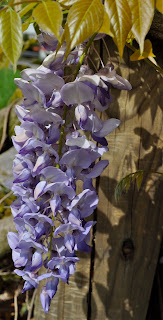 I felt so lucky to just stand under this purple umbrella of flowers and inhale their spicy perfume. 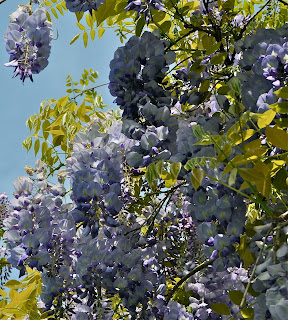 This is a link to the contents of a special issue of Environmental Pollution Magazine issue of papers presented at the April 2008 meeting "Facing the Future." While sitting on the train on my way to Washington DC for Earth Day, I have uploaded each article onto googledocs so anyone can read them, including me. Maybe someone will sue me for copyright infringement, which would be terrific if the media noticed, because then there might be some attention paid to our contracting biosphere and rapidly collapsing ecosystem.
I can only understand a tiny portion of the highly specialized research presented at this conference, which brought together the principal investigators from the world's three major Free-Air manipulative ozone exposure experiments, but some of it makes perfectly clear in plain English that trees are imperiled by emissions from burning fuel. I am slowly wading through and will be posting snippets here on the blog.
Here for example is the introduction to "DNA Damage in Populus Tremuloides":

"Ozone (O3) is a major air pollutant and greenhouse gas, and is increasing in concentration in the troposphere along with carbon dioxide CO2; (IPCC, 2007). In the troposphere, O3 is a secondary pollutant generated through photochemical reactions between nitrogen oxides and volatile organic compounds in the presence of sunlight. Ozone is an important stressor of over 30% of world forests (Karnosky et al., 2005) and a potentially phytotoxic gas that at certain doses can induce necrosis in plants similar to wounding and pathogen infection (Heath and Taylor, 1997; Pell et al., 1997). Chronic O3 exposure accelerates leaf senescence, reduces photosynthetic rates, and shifts carbon (C) partitioning (Reich and Amundson, 1985; Pell and Dann, 1991; Karnosky et al., 1996; Pell et al., 1999; Cooley et al., 2001)."