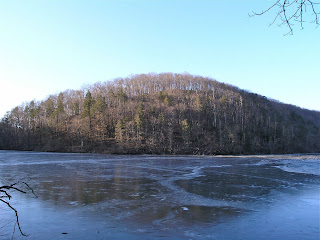 Lake Road in Far Hills is a narrow, twisting drive that was carved out of the steep slope along one side of Ravine Lake. 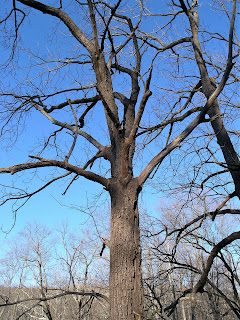 Perched over the top of the hill on the far side is historic Blairsden. Many of the trees on these precipitous inclines are old, the terrain having made logging inaccessible. It is really sad to see how they are deteriorating. 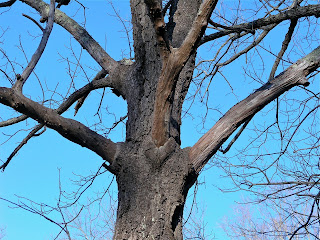 The branches are rotting. 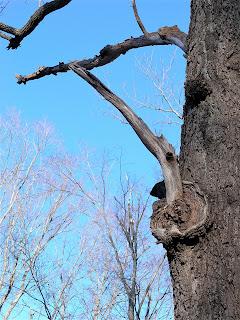 And at the foot of many trees, holes are appearing. 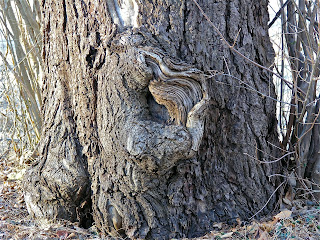 At the northern tip of the lake is (what else?) a Lake Club, which doesn't look terribly fancy, and offers nothing but tennis and canoeing, but membership is nonetheless effectively limited to succeeding generations of local families. 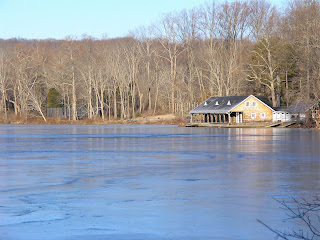 It's difficult to demonstrate in pictures how depleted these woods are. Merely being able to see through the treeline is a new event. The trees are literally shrinking, disappearing, and the understory is non-existent. 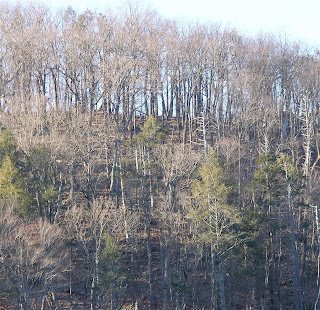 In addition, the view used to be green all year round because there are so many conifers. 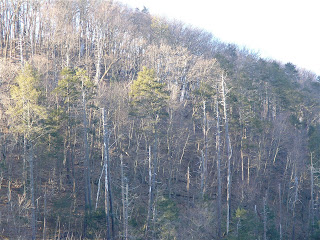 But now, all those straight white trunks are completely dead pine trees - just within the past two winters! If you click on the picture you can count them up - and see that of the remaining that possess any green whatsoever, the lower branches are bare. At the present rate, there won't be a single evergreen alive by this time next year. 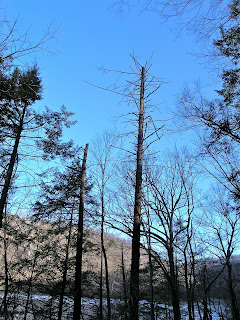 They can be found all around the water's edge. 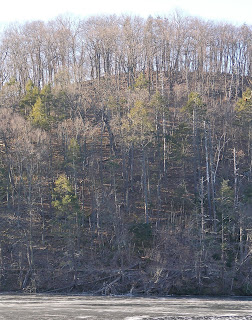 With the pines either bare or thin it is possible to discern many trees lying on the ground. Unlike in yards or more level areas, nobody has been clearing the fallen trees and so they are indicative of the rate of loss. 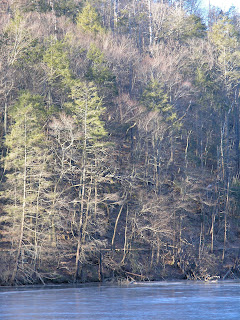 The dead wood slides down and then along the shore tumbles into the water. 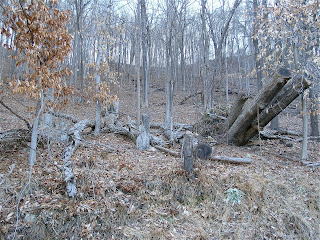 It's actually kind of scary because the road is cut so deeply into the hillside and the trees are listing threateningly over it. There are many root systems that have been knocked over and remain, their crowns removed with chain saws to clear passage. 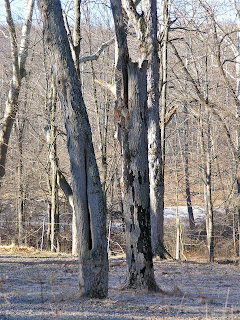 In the wetlands above the dam this sort of damage is ubiquitous - peeling bark and gaps in trunks. 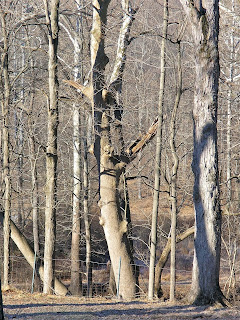 In a random sampling, we have from left to right, a toppled tree, a tree with broken branches, and a tree that is splitting apart at the top of the photo. 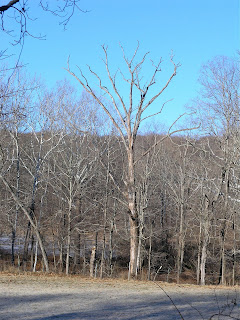 This sycamore has no "terminal growth" - which means recent young shoots from the ends of the existing branches. Here is how the University of Minnesota defines decline:
Decline is a general term describing dieback of the branches in the crown, associated with a general reduction of tree vitality.

The symptoms usually develop slowly, and may not be noticed immediately. The leaves may become smaller and fewer in number. The crown of the tree often thins out. New terminal growth may be limited, and branches may die. Abnormally large seed crops are sometimes associated with decline, as is early fall color and leaf drop. Trees affected by decline may survive for many years, or may die within a few years. 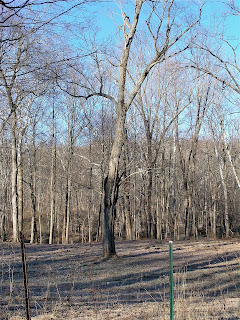 That pretty much summarizes the condition of every single tree still clinging to life in New Jersey. The example above and, closer up, below is in the process of breaking apart, about 20 feet above the ground. 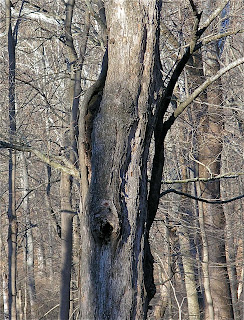 And the trunk will soon resemble the broken stubble depicted below, which has already lost it's top 2/3. 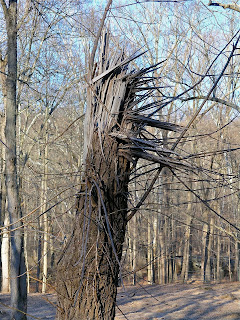 The pathos, and inherent (though unintended) violence make me think of Edward Scissorhands:

For a little escape, we splurged at the Essex Fox Hounds annual Hunt Ball. 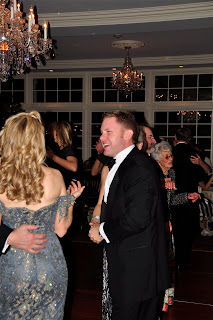 This year's event was held at Trump National. 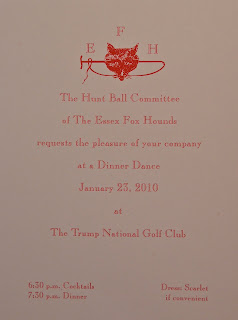 Significant Other gallantly agreed to suit up for the event. 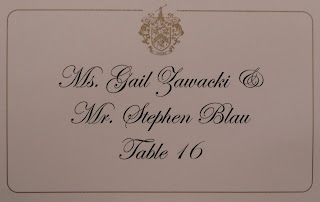 Although the dress is "Scarlet if convenient" for those with the colors. 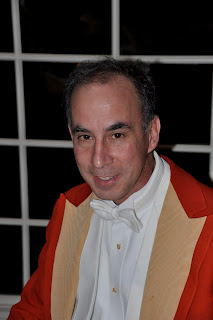 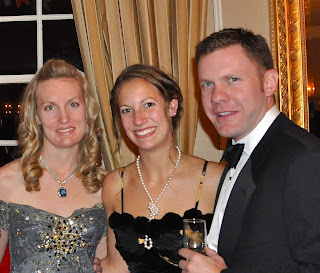 It's a time to greet old friends. 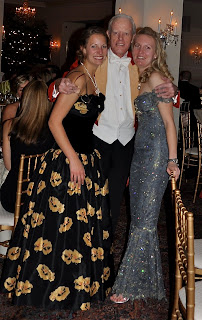 A time to dance! 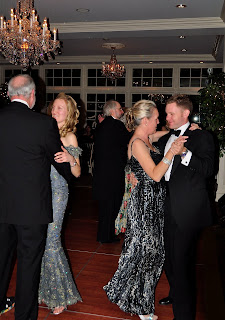 And especially, a time to laugh. 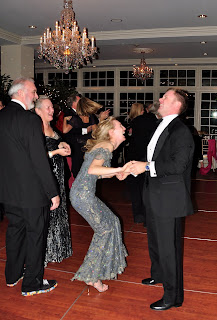 Thanks to Mossy for alerting me to this film. Mossy and Roger ask everyone to go DC on April 22, Earth Day, to urge President Obama to explain to America why we must take the lead on clean energy. I plan to take Amtrak.
Posted by Gail Zawacki at 10:05 AM