I planted this row of bamboo a few years ago, hoping it would form a long and graceful screen. 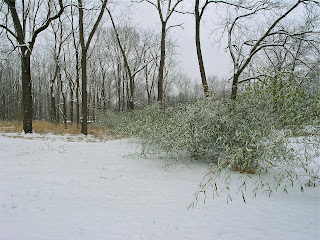 In the snow it made lovely patterns. 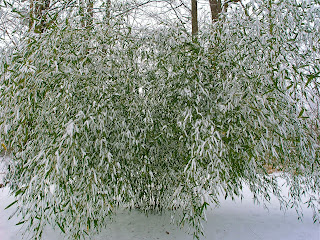 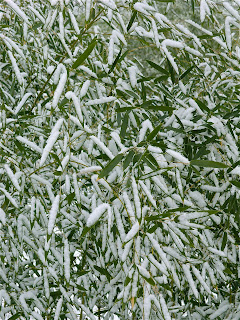 ClimateProgress.org has been the main source of my education about the effects of climate change, ever since I began in earnest trying to learn everything I can about this existential threat to my children. What made me wake up to the immediacy and severity of it, initially, was realizing that trees are dying. Old trees, young trees, indigenous wild trees, planted landscape trees, deciduous trees, coniferous trees. All dying, and fast!
Before I started this blog, or even thought to start this blog, I read Joe Romm's book, Hell and High Water, and began posting questions and thoughts in the comments of his famous blog. Now, he has a new post that looks back on the past year, with a collection of articles about research showing that the effects predicted to occur because of climate change are happening much faster than expected. It also reveals that, with very few exceptions, scientists aren't telling the general public how dire they personally believe our future will be.
In the many links to such reports he includes this one from January 2009, about dying trees. It was interesting for me to read my own comments there, which I had forgotten about, and were well before I even considered starting my own blog - and to see that I've been saying the exact same thing, pretty much, for over a year and a half.
A trip down memory lane.
And since those days, about one year ago, my level of alarm has gone through fatalism, disgust, dread, horror, nightmares (literally), and fury.
And also empathy. I understand why most people prefer to ignore our self-destruction. It is agonizing to recognize it, especially when it seems like there is no way to prevent it.
At this moment, I fear we will soon destroy our ability to produce crops, from ever increasing levels of atmospheric toxins, and that will create agricultural failures, and famine. We will end up eating our livestock and then our pets, and then what?
Each Other?
Posted by Gail Zawacki at 8:15 AM