Get Settled with some Popcorn!

This morning when I woke up a thick heavy snow was falling. 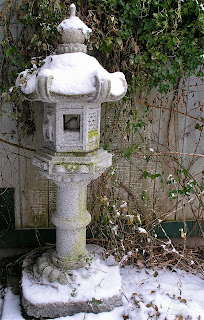 The autumn clematis behind the lantern still has green leaves. 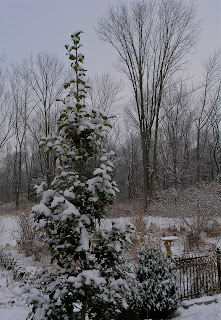 This holly was planted about 10 years ago and has always been disappointingly spindly. I had blamed the lawn service for weedwacking the trunk. 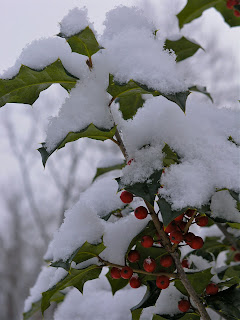 It has never had so many berries and looked beautiful covered in snow. Of course many leaves have the discoloration you would expect from toxic atmospheric gases. 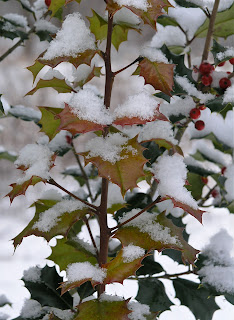 Now, not one but two videos.

Click here for a compelling comparison of glaciers over time (found at DesdemonaDespair). It has excellent photos and interviews with experienced glaciologists that will make 2035 and 2350 be trivially distinct.
Next is the story of geneticists gone wild, narrated by David Suzuki who, I just realized, is a climate hero. It's a bit slow at the beginning (and you should don your tin foil hat first) but it's worth getting through because there is some pretty solid footage of the scale of corporate malfeasance and the mind-boggling profits to be realized.


Here's evidence of how insanely depraved our society has become:
"Deer, elk and even raccoons have a new type of predator to worry about: Poachers who kill increasingly for the thrill of it.

Scott Talbott, an assistant division chief with Wyoming's Fish and Game Department, calls it "wanton destruction" that goes beyond shooting.

Poachers run down deer with cars or snowmobiles, and chase raccoons, then beat them to death with clubs. They also shoot deer, elk and antelope, sometimes removing valuable antlers but often leaving the carcass to rot on the ground, Talbott and other wildlife officials said.

"It's thrill killing — people just going out and killing stuff," Talbott said. "We have seen a significant increase of that in Wyoming. It's disturbing."

And it's not limited to Wyoming - there are reports of the same behavior in Pennsylvania, Wisconsin and other states. It's called a "trend" that has emerged in recent years:
"The thrill killing usually involves youths ages 14 to 23, who gather in groups with the intent of killing as many animals as possible, said Chuck Horn of the Wisconsin Department of Natural Resources."
Thank goodness they're doing a study on it!
Here is a poll indicating that more Americans than ever are convinced that global warming will not have any negative effects on them! I suppose it really shouldn't be surprising. The more obvious it becomes, the more frightening it is, and the more people will stick their ostrich heads in the sand to ignore it, or laugh like idiotic ninnies when the President mentions the overwhelming evidence of climate change. This, in spite of the fact that the last time CO2 levels in the atmosphere were this high was FIFTEEN MILLION YEARS AGO! Only look at the article if you can bear to learn what temperatures and sea levels were that long ago.
Posted by Gail Zawacki at 6:37 PM