Lichens and Other Mysteries 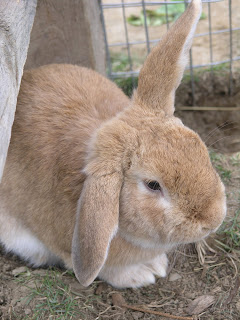 Last week I went to a local pick-your-own farm to get late harvest vegetables. The owners have managed to make their agricultural home quite an attraction, which is mobbed on the weekends, by fostering lots of adorable animals for the kids to feed and pet, as well as a corn maze, and a mountainous pile of hay bales to climb. 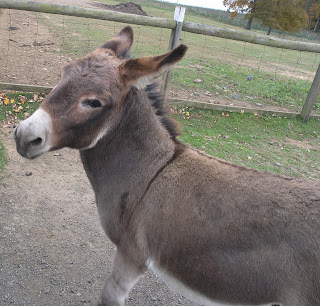 There are super cute miniature donkeys, who are very inquisitive. 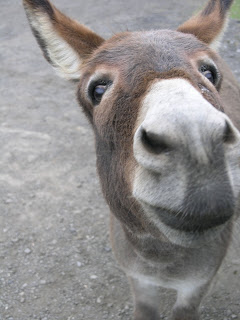 Of course, while I was there I had to record the condition of the trees, which as will be seen, were abjectly thin, on October 15. 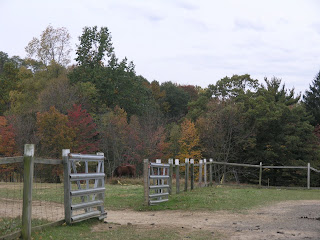 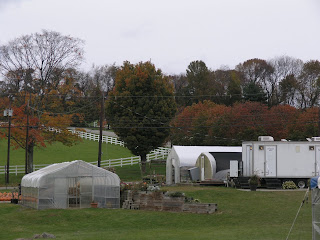 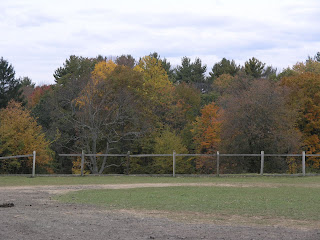 Quite a few trees are already devoid of any leaves at all. 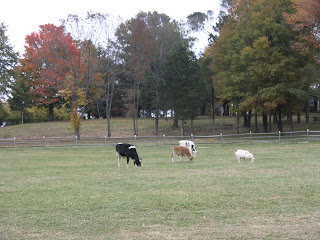 The cows and pigs munch and root, as oblivious as are 99% of humans to the harbingers of ecosystem collapse plainly visible around them. 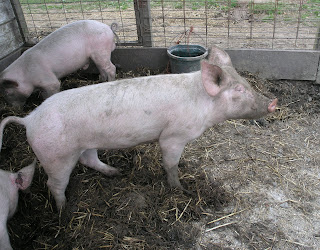 What does this say about the prescience of humans? It's all about the food! 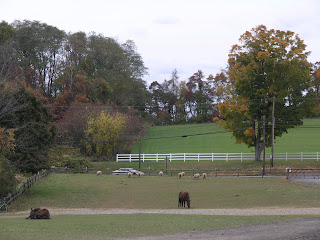 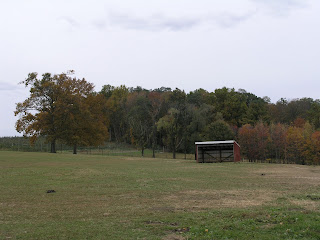 There are quite a few playful goats, who regularly escape the confines of the pasture and wander into places they shouldn't be. 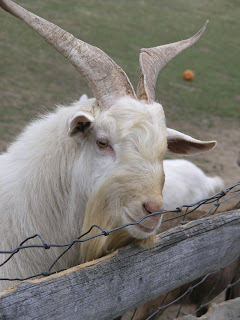 Feeding them is fun! 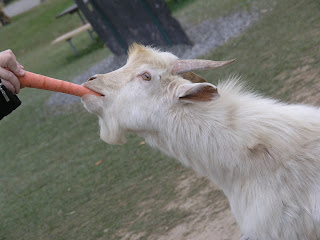 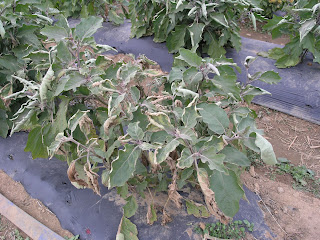 And here is a leaf close up. 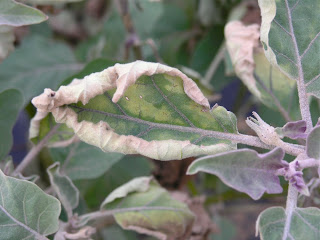 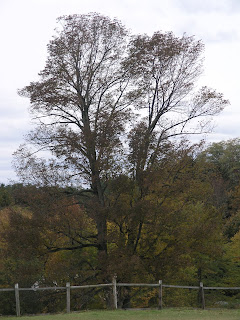 The pumpkin patch was overshadowed by a huge, dead tree in the background, behind the cornfield. 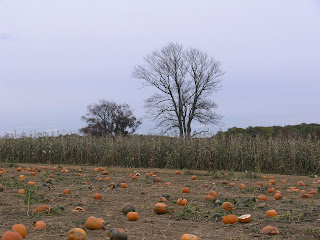 On another topic, much to my delight, Dr. Paul Rogers of Utah State University has responded to my questions about Sudden Aspen Death and the potential role of atmospheric pollution by kindly sending me so many links to such valuable research that my head is spinning!
Here is one for the lichen skeptics:
Since the effects of air pollutants on trees can be difficult to separate from other influences on growth (such as soil variations), epiphytic lichens provide a clear indication of potential air quality impacts on total forest productivity. 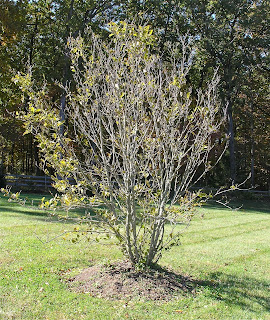 Along those lines, let's consider a random, typical lilac which I photographed today, October 19. It should have all of its leaves intact, since we have yet to experience frost. But actually, the leaves have been falling since midsummer, it has been getting thinner and thinner, and here is what the remaining leaves look like, perfect examples of atmospheric poisoning. 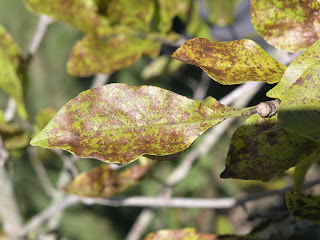 And now let us look at the branches, swarming with lichens, not one variety but at least two and maybe more! 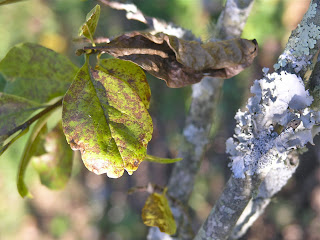 There is that flat type, and the hairy kind. 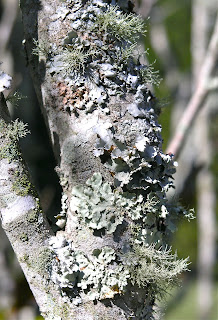 The hairy type I first saw on vacation in Newport last summer, and again on Cape Cod. This is the first time I have seen it in New Jersey. Um seriously, can anyone really claim that a branch so sodden with a growth that also likes to live on rocks can possibly be anything other than DEAD? 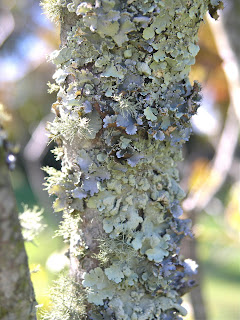 Now - some anomalous behavior, which I can't exactly explain, not being a botanist, will follow. Although I do know, it's not normal: 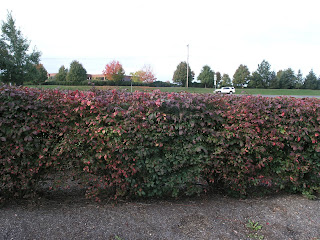 This flaming bush hedge looks as though it might be turning into that intense scarlet, until under closer examination, it is apparent the leaves are turning brown faster than red. 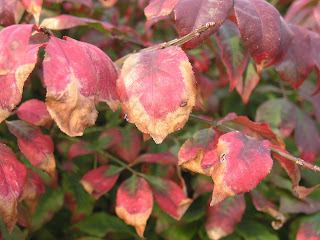 The delphinium finally bloomed. I cannot explain why so late or why they are a dismal shadow of what the glorious blossoms were last year, when each strand was at least a foot or more high, and now none are even six inches. 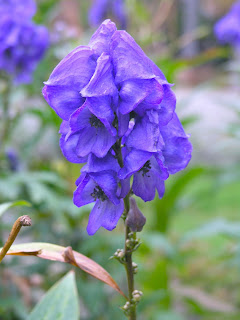 And this is just bizarre. Quite a few trees have been displaying this type of growth, where the earlier foliage from spring is turning fall color, and more recent, spindly growth sprouts are still green. I don't know if this is the tree's response to overall decline, a frantic late growth spurt - or if perhaps it is directly related to the fluctuating concentrations of toxic greenhouse gas emissions in the atmosphere. 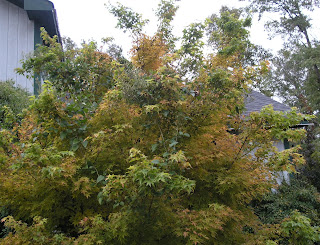 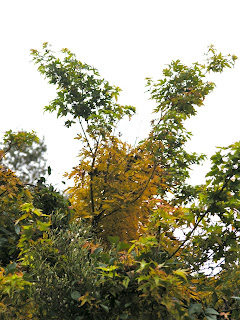 Below in the forefront is the greener late leaves, surrounded by the original growth in the spring. 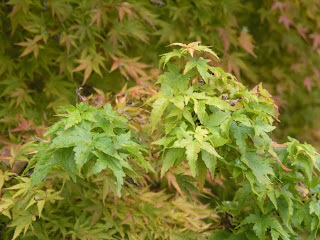 Another link I discovered thanks to Dr. Rogers is this page from the US Forest Service Ozone Biomonitoring Program, which has over 1300 stations in 45 states!
Where the following is to be found:
The airborne transport of O3 to remote forested areas has led to increasing concern about how this pollutant is influencing the health of individual trees and forest ecosystems. In the United States, periods of high ozone concentration coincide with the growing season when plants are most vulnerable to injury. Possible impacts of ozone on forest species include reduced growth and vigor, reduced seed production, and increased susceptibility to insects and disease...
When ozone contaminates the environment, the bioindicator plant shows a visible response usually described asupper-leaf-surface ozone stipple for broad leaf plants, and chlorotic mottle for pine species. A useful bioindicator plant may be a tree, a woody shrub, or a non-woody herb species. The essential characteristic is that the species respond to ambient levels of ozone pollution with distinct visible foliar symptoms that are easy to diagnose.
Here is a movie from the National Park Service about air quality.
I have joined up at tcktcktck, which at the moment has on the home page a sob-inducing video of children who are going to inherit the hideous mess their parents have made of the planet.
Somehow I missed the Oct. 15 Blog Action Day, but I expect to be perusing their list of 13,323 bloggers, and counting, who signed up to participate in their annual social action event to address climate change. Almost 18 million readers across the globe clicked on the posts, including one from the White House, to raise awareness. Not too shabby! Now we only need 5 billion or so more to wake up, especially the ones who control our governments (that would be the corporations) and will be deciding our fate in Copenhagen in December.
For a perversely dire but optimistic planetary prognosis, here is a nice example.
That's all, for now.
Posted by Gail Zawacki at 9:15 PM