This photograph of azalea leaves was taken September 15th. At that time the older leaves were shriveled and browned, but the branches had recently put out new growth, although the bright, light new leaves were already showing their cell structure, struggling to photosynthesize and make darker green chlorophyll. 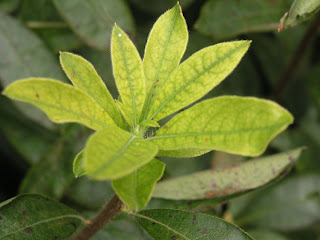 Fast forward to September 22, yesterday. In one week, the leaves are marked by toxic poisoning. 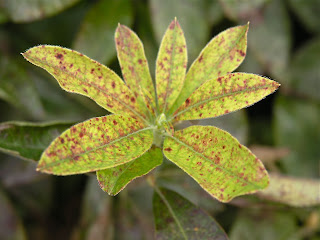 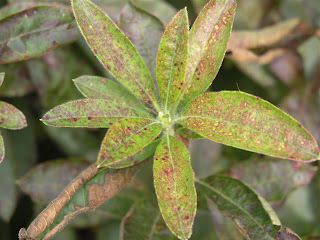 And the original leaves, from the spring growth, are useless. If the plant were healthy, it wouldn't shed leaves until frost. 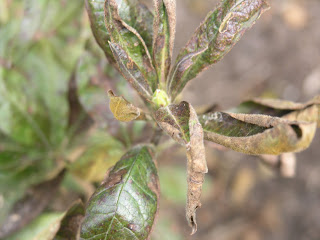 Arg, doesn't show entire thing, you can view it at Wikipedia here.
Note that where I live in New Jersey, peak fall foliage is supposed to come in mid to late October. So why are leaves falling off trees in September??? They are supposed to drop AFTER they turn colors.
This is from the EPA report, page 509:

"Because of the differing sensitivities among plants to ozone, ozone pollution can also

exert a selective pressure that leads to changes in plant community composition. Given the range

and response to ozone, it is not possible to identify threshold values above which ozone is

consistently toxic for all plants. The next few paragraphs present additional information on

Ozone also has been conclusively shown to cause discernible injury to forest trees.757,758

In terms of forest productivity and ecosystem diversity, ozone may be the pollutant with the

Because plants are at the center of the food web in many ecosystems, changes to the plant

zone). Ozone impacts at the community and ecosystem level vary widely depending upon

composition, soil properties and climatic factors.761 In most instances, responses to chronic or

recurrent exposure in forested ecosystems are subtle and not observable for many years. These

injuries can cause stand-level forest decline in sensitive ecosystems.762,763,764 It is not yet

possible to predict ecosystem responses to ozone with much certainty; however, considerable

in highly damaged forests in the United States.

wheat). The most extensive field experiments, conducted under the National Crop Loss

typical of those found in the Unites States.”765 In addition, economic studies have shown

degree of negative effects associated with exposure to ambient ozone levels. It is estimated that

more than $20 billion (1990 dollars) are spent annually on landscaping using ornamentals, both

by private property owners/tenants and by governmental units responsible for public areas.769

This is therefore a potentially costly environmental effect. However, in the absence of adequate

relevant to these types of vegetation, no direct quantitative analysis has been conducted."

Clearly, the EPA is well aware of the dangers to vegetation of ozone!

In an exciting discovery, it appears there ARE some scientists, at the Vulcan Project, emanating from Purdue, who are tracking emissions.

"An animated version of Vulcan reveals huge amounts of greenhouse gas gets blown toward the North Atlantic region."
So in my spare time, I will be investigating their website, which claims:
"Work is underway to complete similar inventories for Canada and Mexico, to include CO and NOx emissions, quantification of all years from 1980 to the present, and incorporate biotic-based fuels (including ethanol!)."
This article about Fall Foliage in the NYT was written in 2005 and already was reporting and predicting a further loss of coloration, but places the blame on temperature increases. I will be writing these researchers to see learn what their current thoughts are.
And news for the day from across the world, dust storm in Australia!

Here is the day's sadness, a dead finch. I don't want to make too much of anecdotal, quite possibly meaningless and random events. But this is the 4th time in my entire life of gardening and hiking that I have come across a dead bird lying on the ground from no apparent cause (kitty cat). The others were twice this summer - a blue bird, and a robin. And once last summer - I was so excited to be able to take pictures of a hummingbird which for once wasn't zipping around too fast to be caught on camera. And then it lay down on a big lily flower and died before my eyes. Draw your own conclusions. 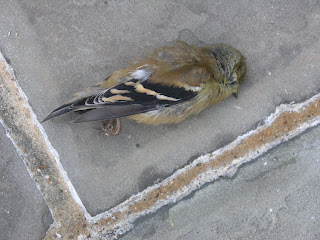