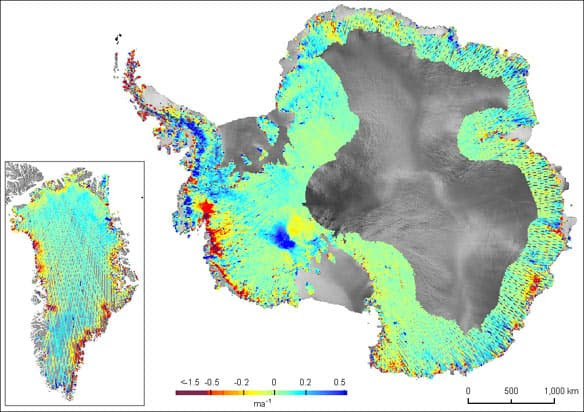 These maps show the pattern of surface height change over the Antarctic and Greenland ice sheets for the 2003-2008 period. Red areas indicate where the surface height is lowering. (H. Pritchard, British Antarctic Survey)

The massive ice sheets that cover Greenland and Antarctica are thinning rapidly, say British researchers who have analyzed 50 million laser measurements from a NASA satellite.

Researchers from the British Antarctic Survey and the University of Bristol said the most dramatic loss of ice was the result of glaciers flowing into the sea at a faster rate.

"We think that warm ocean currents reaching the coast and melting the glacier front is the most likely cause of faster glacier flow," Hamish Pritchard of the British Antarctic Survey said in a statement.

The scientists said data from the ICEsat instrument on NASA's Earth Observing System satellite showed that "dynamic thinning" can be seen on the coastlines of Greenland and Antarctica and is spreading into the interiors of the ice sheets.

"We were surprised to see such a strong pattern of thinning glaciers across such large areas of coastline," said Pritchard. "It's widespread and in some cases thinning extends hundreds of kilometres inland."

In Antarctica, the ice sheet is thinning fastest in West Antarctica. The Pine Island Glacier and the Smith and Thwaites Glacier are thinning at a rate of nine metres per year.

The authors of the study, which appears this week in Nature, said the results of the satellite measurements are important to accurately predict rises in sea level as the ice melts into the ocean.