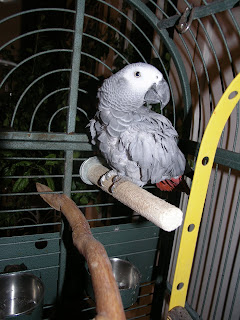 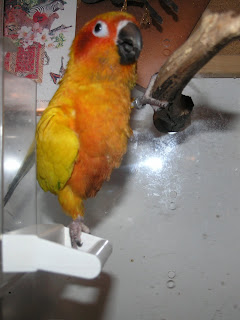 Before I start, let me say that Bird (the South American Sun Conure) and Simon (the African Grey) found their omission in a prior post of Wit's End critters to be HIGHLY offensive. So here they are. Bird just shrieks but Simon wants you all to know that among other choice phrases, he can and often does utter...
Obama! Yes we can! with a particularly lyric and melodious tone.

And before I forget, I just received my copy of the book by Fred Pearce, "With Speed and Violence, Why scientists Fear Tipping Points in Climate Change" which I highly recommend. The tipping points are key, to make the understatement of all time.


These virtues went out of style with most American consumers quite some time ago, although who knows, they may be coming back into retro fashion as the economy continues to implode.

The first time I really thought about this topic was one day when my children were very little and I was helping a friend prepare for a party. She grew up lounging at a country club in Short Hills and was then in the process, with her husband, of renovating an 18th century farmhouse at fabulous expense. But this day she was cleaning fresh strawberries, and I was absolutely riveted, with the sort of reluctant horrified fascination when you stumble across porn on the intertubes, as we stood together at the sink and I watched her slice off the tops to remove the hull with lusty abandon. All my life I had carefully, meticulously, cut a tiny hole around the leaves with the tip of a paring knife, so as to preserve as much of the fruit as possible.

Decadent to me was purchasing a little tool that looks like a wide tweezer to yank it out, which was much faster, and still limited the loss of flesh. But, I had to admit, her method was faster still and it made me think about the virtues of efficiency versus labor, and time-intensive conservation.

I actually came down on the side of efficiency - hey, I had hungry mouths to feed, and I like to have massive dinner parties as well - so I too commenced to blithely lop off the tops of strawberries ever since. I also thought a bit about my mother, because it was clearly her example that had led me to instinctively scrape up every tiny bit of chopped parsley on the cutting board and scrape the last smidgeon of batter from the bowl.

My mother saved scraps for compost in her garden decades before that became trendy. She grew and canned tomatoes, and green beans, made her own pickles and catsup. She baked her own bread, not because it was so far superior to store bought, which it was, but because it was cheaper. I loved coming home from school on those days, the house would smell so luscious and the first thing I would do was to slather butter on fat slice while it was still warm enough to melt it. Yummmmmm!!!

She taught me how to rip the seams off my father's shirt collars to turn them around and resew them, hiding the frayed side. She knitted, and tatted lace, and made braided and hooked rugs. She raised goats and made sublime fresh cheese. Ever since the strawberry moment when I recognized that she was a bit unusual, I love to tease her about all her little economies. Like, she has this metal sort of cage with a handle, where she puts all those worn down pieces of soap that are too slippery to hold up in the shower, and she vigorously swishes it through hot water to wash the dishes.

Last time I was visiting Roger and Nicky in England I wondered anew at how much more modestly the Europeans live compared to Americans. Even their refrigerators are tiny. We were staying in their thatched cottage in the country and after I showered and was thinking about the old tub arrayed with all my lovely shampoos and rinses and washes in their plastic bottles, I mentioned to them how indispensable the plastic containers seem to have become. What did people do before them? Surely glass bottles would have been too easily broken. "Well, Gail," said Roger patiently as though explaining obvious things to a recalcitrant child, "They used bahsoap!"

"Bahsoap!?" I repeated? "What is bahsoap?" And duh I finally got it. "You mean they rubbed bar soap in their hair to clean it?"

We are so spoiled. We live at the absolute pinnacle of luxury. I am sure that when I was growing up, we did not have plastic garbage bags. The garbage had to be taken outside, and tossed in the can, every night.

Tonight it was dark when I got home. The last time I went to feed the horses late, the fox was lurking in the paddock. As I walked towards him, he melted away in the dusk. Tonight I thought how fortunate I am to have electric lights in the tack room, and car headlights to illuminate the chicken coop so I can collect the eggs. And I thought how frightful and different it must be to have no light in the dark, to be fearful of stepping on a snake, unable to identify shapes and movements all around. *shiver* Yeah, we are so spoiled.

Speaking of plastic, I mentioned this site earlier, chrisjordan.com but it is appropriate to include it again. Look at Running the Numbers I and II, you will never be the same.

I will end this post with peaches. Steve knows I love peaches. They have the most delectable aroma, there is nothing as sumptuous. And then there's the immortal line, Do you dare to eat a peach?

I am so lucky to live in Oldwick which is surrounded by orchards. A couple of decades ago, Roger and Nicky gave me a cookbook written by an English lady, Jane Grigson, that had recipes all using fruit. One of them said, allow one peach per person (unless you can afford more).

Since I read that I've never forgotten there were times when more than one peach per person was unaffordable. And I now fear those times may be returning, with less poignance, and more violence.
Posted by Gail Zawacki at 9:24 PM