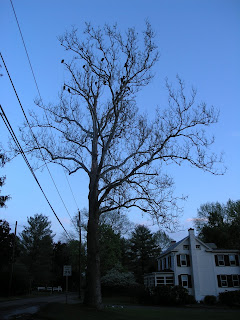 This sycamore and many (most) others have been struggling for years with a fungus. Those are turkey buzzards, like harbingers of doom, roosting in the lifeless branches.

As spring emerges, many people are busily pruning dead branches and replacing withered trees and shrubs, which would be comical if it weren't so terrible. And which is why this article is funny and sad:

This brings me to some thoughts about evolution, which were elucidated and refined in conversation with Steve, who is the smartest person I have ever met. Also too, provoked by a message from some jackass forester whose name I don't recall. He said, in response to my email, that I should stop being so depressed about the condition of the trees because they are not delicate and are instead, quite resilient.

To those who focus, like the scientists in the article referenced above, on specific causes of tree failure - like beetles, or as has been suggested, ice storms, and any number of other pests and diseases - I have to say they are missing the trees for the forest.

From an evolutionary standpoint, like any other species in our complex and splendidly diverse biosphere, each variety of tree or plant has evolved to survive in the exact precise niche they have occupied for millennia. No warmer, no drier, no more or less sunlight. If any of those environmental factors is altered, they simply can't adapt because their generational turnover is longer than the time span of changes wrought by us humans.

Even leaving aside what can be observed empirically, should one take the trouble to see the trees in the forest, it is simply illogical to assume that trees COULD survive in an environment other than that to which they have, through the long process of natural selection, slowly and exquisitely adapted to thrive. We, us humans, have altered that environment, and there is much more already in the pipeline even if we stopped greenhouse gas emissions today, that will radically (from a tree's evolutionary position) alter temperature and precipitation. How could we expect any other outcome than ecosystem collapse?

Now, you'd think that people who are trained scientists and foresters would be able to recognize this as implicitly true and predictable, but seriously, they're the worst when it comes to denying the obvious. They are frantically studying things like transporting nursery stock rather than reckoning with the looming disaster. Now why is that? How can that be?

Here are my thoughts, with apologies to those who have already heard them:

Not so very long ago, millions of people walked willingly to their own destruction, and millions more contend they never noticed the smokestacks and stench of the crematoria. Holocaust references are supposed to be cautiously limited but the point here is, that this demonstrates that it is perfectly possible for enormous numbers of people to willfully blind themselves to even the most despicable and horrific fact if it would be utterly soul-crushing to acknowledge reality.

It has happened before, and it is happening now.

I feel rather like I imagine a Native American might have felt, somewhere in the last couple of centuries, who realized that her family's entire way of life was going to be obliterated forever and there was nothing she could do about it.

And then there's this:

I have been hearing these little bastards for two days, in fact, I can hear them now as I type. And I've been wondering, WTF?
Posted by Gail Zawacki at 9:01 AM