Correspondence with the Cicada Dude, and pictures of trees 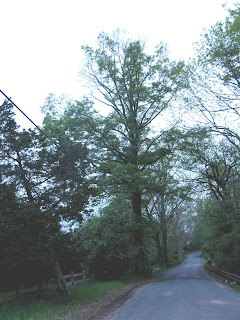 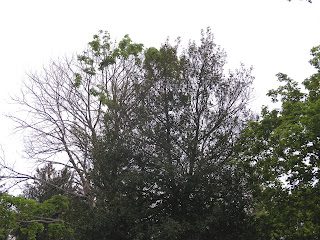 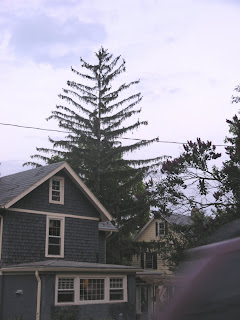 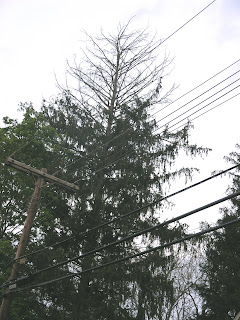 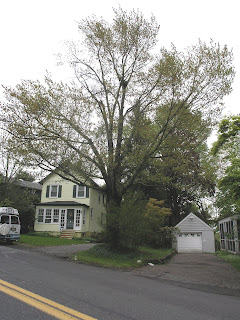 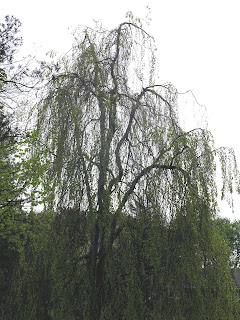 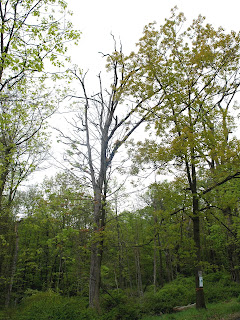 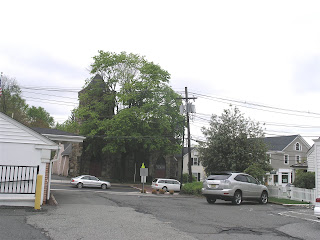 Here are some pictures, from a tiny area. The important things to note are thinning pines and as for the deciduous trees, leafing out only partially. The very first picture is one of two remaining red oaks, whose loss distressed me so much, as I described earlier.


I mentioned in an earlier post that I had read an article about the premature emergence of cicadas, and wrote to the author of the study, who was considerate enough to write back. Below I will paste our messages:

I have been hearing cicadas and reported them at the link.

I also would be very interested in any comments you have on my impression of tree decay as documented on my blog here: http://witsendnj.blogspot.com/

where, if you scroll down to the entry titled "Effects of Climate Chaos" I have posted my observations.

The science daily article does not really expound on what is different about the trees that causes the cicadas to mature early. I would appreciate any links you might have that go into that aspect of your research.

Thank you for your email.

The differences in the trees that would trigger a change in the cicada's time-keeping that we have observed involves the recent milder winters. In Dec 06-Jan 07 we had very mild temperatures reaching a high of 65F in January. During this time the maples and other trees started to leaf out. In late Jan - Feb we had a cold spell where highs did not get above 32F for two weeks. The trees that had leafed out, of course, dropped their leaves following this cold period.

As the spring progressed, the trees leafed out a second time and everything was normal. However, in parts of Cincinnati where the cicadas were expected to emerge the next year (2008), we had a large number of cicadas emerge a year early. We know from experimental results that cicadas count the years by monitoring fluid flow in the trees. We also suspect that the difference between the 13-year and 17-year cicadas is a four-year period when the 1-5 year old juvenile 17-year cicadas do not molt. However, if they should molt during that time, they will emerge four years early. That has been visually confirmed by my lab.

If trees in a region experience milder conditions during the early cicadas' development period, it would likely interfere with the cicadas' time-keeping process and the could molt early. What we are seeing now is the fifth four-year acceleration in the past 12 years. Moreover, these are regional events and not limited to just a yard or two, which also suggests a large cause. The leading candidate now are the milder winter temperatures.

I hope this is of help.

It was very kind of you to reply. Your explanation matches my observations particularly regarding the mild winters leading to damage during cold snaps. I saw rhododendrons in particular curl up their leaves (as usual) during two spells of 12 degree weather however, they never unfurled and now are brown and shriveled. I also observed the bark of deciduous trees that was streaked with black once it warmed up again, as though they were bleeding fluid. Hydrangeas are now sprouting leaves from the ground but the branches froze.

I attribute this to being inadequately dormant due to the prior warm temperatures. It is this phenomena more than any other that I think is killing trees and perennials.

I do not like cicadas but perhaps they have something to tell us.

Do you mind if I post your reply on my blog? Inquiring minds will want to know!

You are free to post my reply to your blog.

Isn't it cool how he's cheery! Studying insects must be fun. You can probably eat them, in a pinch, also.
Posted by Gail Zawacki at 8:29 PM