Up, Up and Away

I don't usually write about climate change, because there are so many gifted writers and real scientists who have websites and blogs on the topic.  It was apparent to me as soon as I began to learn about it, that once begun, climate change will proceed inexorably and unstoppably, accelerating along the way in violent jolts as amplifying feedbacks kick in, with mass extinctions scattered here and there, quite likely until the entire Earth is uninhabitable.  And this will probably happen much, much faster than any of the models predict, because none of them account for the amplifying feedbacks, which are far more important than the initial forcing (burning fossil fuels and enhancing the greenhouse effect).  It has been a source of profound frustration to me that virtually all climate scientists shy away from this obvious and elementary conclusion, and instead prattle on about unfeasible and/or unsustainable "solutions" - and the need for more research.
Nevertheless, I am going to post some excerpts and charts from a report just released by the Global Carbon Project, which has got the climate change folks all aflutter, because it says that despite the global recession, carbon emissions have made a frightening, unanticipated jump: 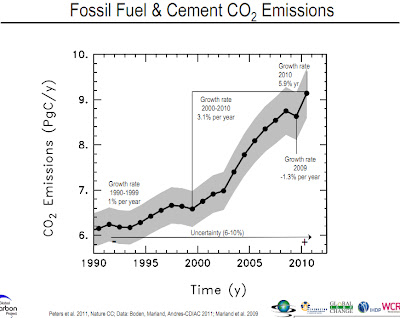 "The annual growth rate of atmospheric CO2 was 2.36±0.09 ppm in 2010 (ppm = parts per million), one of the largest growth rates in the past decade. The average for the decade 2000-2009 was 1.9±0.1 ppm per year, 1.5±0.1 ppm for the decade 1990-1999, and 1.6±0.1 for the decade 1980-1989. The 2010 increase brought the atmospheric CO2 concentration to 389.6 ppm, 39% above the concentration at the start of the Industrial Revolution (about 278 ppm in 1750). The present concentration is the highest during at least the last 800,000 years."
As far as I can tell however (and I reserve the right to be wrong!), this is all based on theories and models whereas the hard, empirical fact is that the level of measurable CO2 has increased - and that is being attributed to an increase in emissions.  If you read down the page a bit, you get to this:
"There is the possibility, however, that the fraction of all emissions remaining in the atmosphere has a positive trend due to changes in emissions growth rate and decline in the efficiency of natural sinks."
A decline in the efficiency of natural sinks with a spike in the level of CO2 is exactly what I would expect, and have predicted, since vegetation is dying back due to exposure to the rising level of background tropospheric ozone.  Even their assumption for forestry sinks has trees with no crowns left! 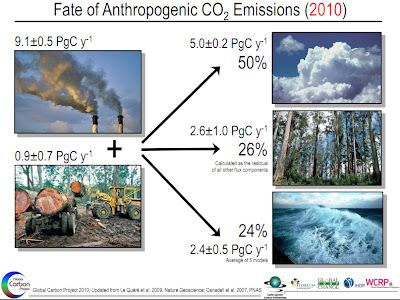 I don't really like Dave Roberts, who writes about climate for Grist.  I once asked him if he would consider helping sell the Climate Hawk pins, thinking he would be pleased, since he was instrumental in popularizing the term (although he did not invent it).  He became indignant because I had put Joe Romm's website address around the border, which I did because I think Climate Progress is a more comprehensive and easily navigated introduction to the basics. 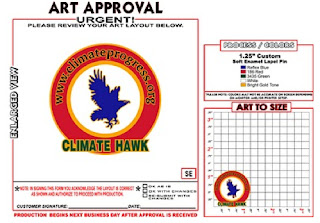 The entire (naive) point of designing the pins was that they might stimulate conversations with Ignorers, who might then read up on the subject ... plus, as I explained to Dave, if I could recoup my (considerable) investment producing the minimum requirement for the first line of pins, I would happily create different designs/colors/web addresses in the future.  Given all the people who like to call themselves Climate Hawks, at least on the internet, I idiotically thought that they would become popular, and self-perpetuate, financially speaking, in the future. That didn't mollify him in the slightest, and that experience became a memorable part of a learning process that taught me that one of the biggest impediments to getting the American public to understand the climate crisis is not merely professional deniers, and scientists who don't want to jeopardize their careers by being "alarmists" - but the professional climate activists themselves, for whom their petty egos and salaries are more important than cooperation to avert catastrophe. 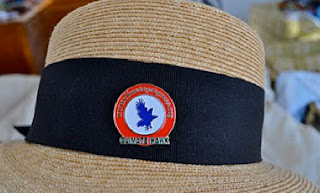 Having said that, he has written a very good article that is unusually honest in depicting just how serious - in fact, doomed - are our prospects for escaping the worst possible outcomes.  The evidence of dangerous destabilization is becoming so terrifying, I almost wonder if there's any point in worrying about dying trees.  Anyway, you can click the clicky to read all about it at Grist, I'm not going to bother to reproduce any of it.  I don't know Bill Hooks, who posted the following comment there, but he is quite astute, so here it is:

Dave - very well said. There are damnably few web writers of standing willing to describe our position this clearly, so I hope others will now review their self-censorship in light of your post.That said, I note that in your post Prof. Anderson does not expose the fundamental flaw in the usual description of the 2.0C danger-threshold - namely that 2.0C would be more than enough warming for the feedbacks to take off and advance to the point of destroying the planet's habitability. In reality, the scientific literature includes data on how at least six of the seven interactive mega-feedbacks are already active and accelerating.As you doubtless know (others may not) their acceleration is due to present warming which is actually timelagged off the 1970s level of ~335ppm of CO2 + other minor GHGs (that timelag being due to the oceans' thermal inertia). We thus have 35 to 40 years of warming "in the pipeline" as temperature risesto reflect the ~60ppm of CO2 that we've released since the '70s to get the present ~395ppm. We also face the loss of the "sulphate parasol" - that Hansen has shown currently deflects around half of the warming that our GHGs would provide – with that loss being due to ending our fossil fuel emissions that include sulphur. (CO2 stays in the atmosphere for over a century; sulphur falls out inaround two years, so the loss of its re-supply is the loss of the parasol).The feedbacks are now evidently accelerating with warming off an effective 335ppm CO2, and there is no prospect of them subsiding as the effective level rises. The two pipeline warmings will be amplifying the feedbacks during the next four decades, which makes a nonsense of achieving the 2.0C target simplyby cutting GHG emissions. The doubling of warming due to the loss of the sulphate parasol is not actually necessary for this conclusion.To put the feedbacks' present state into perspective, it needs saying that some are much more advanced than others.  For instance, in 2010 the loss of albedo (due to declining snow and ice cover) was reported as already imposing a warming equivalent to about 30% of our current CO2 emissions [CO2e](Geophysical Letters). Also, last spring there was a report from NOAA/NSIDC showing a permafrost carbon emission by 2100 of around 100GtC [billion tonnes of carbon] (Tellus). It showed outputs of ~0.55GtC in 2020, rising to 1.6GtC /yr by 2100, but didn't give the vital fractions released as CO2 and as methane [CH4] with the latter having 33 times the GHG potency of CO2 over 100 years, and 105times over 20 years (according to NOAA in 2009).A very recent report (Nature) gave that proportion as 2.7% methane and 97.3% CO2. Applying this to the permafrost GtC outputs shown above, using the 20 year CO2e value of 105 (logical for a feedback dynamic) allows a rough estimate of the relevance of permafrost emissions.[...]At this point it should be noted that the NOAA/NSIDC report of permafrost’s 100GtC output by 2100 excluded both the inevitable acceleration of that output due to warming from those emissions, and also that due to warming from the other interactive feedbacks' acceleration. It thus seriously understates thethreat on both counts.From this perspective it seems clear that, in combination, the interactive feedbacks are at or near the point where they will entirely swamp the natural carbon sinks (av. intake 43% of annual anthro-CO2 output) after which an overnight 100% cut of our GHG outputs would not stop their further acceleration even if there were no pipeline warmings. This doesn't reduce the necessity of agreeing an equitableand efficient treaty to phase out GHG emissions globally; it merely demonstrates that such a treaty is not remotely sufficient to resolve the predicament that decades of corrupt nationalist inaction has imposed on us.As the sufficient complement to the treaty, I'd suggest we also have to negotiate the mandate of a UN scientific body to accredit and supervise the objectives and the technologies of concerted international efforts for global Carbon Recovery and for targetted Albedo Restoration. (The former without thelatter is futile in being far too slow to be effective; the latter without the former would be an untenable quasi-permanent dependence on such intervention; notably, without the climate treaty both would be undermined by rising GHG outputs).The first part of your account of where we stand has cleared away a lot of the usual prevarication and self-censorship around the subject - I really hope that in light of the above observations (which may be of little surprise to you) your next installment will go further and describe the scientific projections thatscientists themselves report professionally but seem shy of describing to the public. To put it bluntly, without that public information, we cannot possibly empower appropriate strategy to achieve changes commensurate with the threat of climate destabilization.All the best,Billhook