On an overcast afternoon a couple of days ago I detoured into a driveway, even though I was in a hurry, because I couldn't pass up this classic scene - dying trees being razed to the ground with large power equipment, their branches dismantled first and then the trunks felled and chopped. 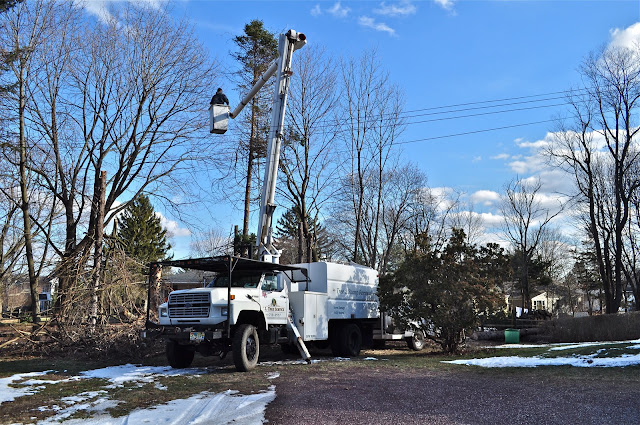 I started clicking away with my camera, wishing the sun would come out from behind the cloudy cover, when a grey-whiskered gentleman (let's call him Phil because, um, his name is Phil) rushed out of the house to accost me...which was fair enough, given I was trespassing brazenly on his front lawn.  I was ready this time though, and before he could complain I disarmed him with my Wit's End card (hey, I got the idea to print one from Des, whose card pictured here is included in the not-to-be-missed essay: 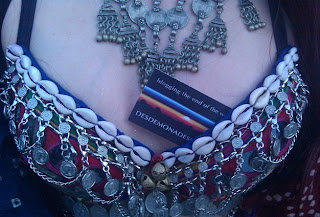 "50 doomiest photos of 2010")...but mine is not very racy, just the Cheshire Cat image and the Existential Question:  "Why are all the trees dying?" above the blog address.


I introduced myself and said, "Hi, I write a blog about dying trees," while he scrutinized the card.  "It's such a shame," I added sympathetically, waving at the carnage.


He looked from the card incredulously towards the emptying place that used to once be a dense row of mixed conifers, a lush green wall that had provided him total privacy from the view of his neighbors. 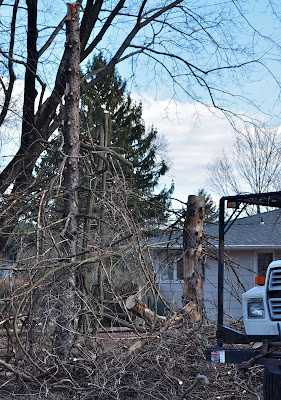 "Something got to 'em," he acknowledged ruefully.


I explained that all the trees are dying everywhere from cumulative exposure to toxic tropospheric ozone, whereupon there ensued a typical denier/climate hawk exchange, wherein he faithfully and predictably regurgitated just about every talking point verbatim.  I bet he watches FOX teevee.


First, he denied humans could produce enough pollution to influence trees, and claimed they are dying because they are old.  I used the "running car in a closed garage" analogy.  Then we debated a bit about how long trees should live (centuries for most species) and finally I pointed out that young trees are dying just as fast as old trees.  Looking at some of the slender trunks being swiftly denuded of their bare branches by the chain saw, he switched topics.


"I don't know about that global warming," he said, shaking his head doubtfully - even though I hadn't brought up the issue.  It is inextricably entwined in the view of deniers - and should be for climate and environmental activists too.  Even though they are separate but related problems, the solution to environmental destruction whether through climate change or pollution requires collective action, and a huge paradigm shift from competition to cooperation that is anathema to most Americans - and alien to our culture. 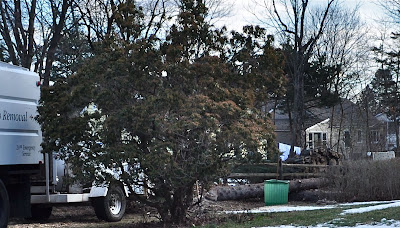 "The climate is always changing," he next insisted.  "Of course," I agreed, "but it has never changed so fast.  In the past it has changed over thousands of years, giving species time to genetically adapt or migrate.  Now we are changing it radically in time frames of decades."


He shrugged, apparently resigned to environmental catastrophe and mass extinction, if the alternative was to forsake cheap fuel.  "What can we do about it?" he asked as he surveyed the trucks arrayed on his property.


"Switch to clean energy!"  I replied brightly.  "Use solar, and wind power, and geothermal!"


He scoffed and delivered another denier staple:  "It won't do any good because of the rest of the world won't switch."


Don't you love it!  First, there is no global warming and next, it's natural, and finally, it's all true but it can't be fixed anyway because of China and India, so why bother!?


Meanwhile, the reports of animals dying off are mounting up at dizzying speed.  I've been compiling a list but it seems to grow faster than I can get around to post it.  Naturally, I think this is only to be expected and have been expecting just such rapid population crashes, because vegetation has been dying back for some time due to the inexorably rising levels of ozone - which also diminishes the nutrient value of grains and seeds.  It's inevitable that as the base of the food chain is reduced that animals, weakened by starvation, will tend to collectively expire when exposed to other stresses, such as unseasonable cold.  Even water absorbs ozone, so who knows whether and how that might affect phytoplankton in the ocean (reduced by 40% in the last two decades) and, eventually, fish?  The visible damage to aquatic foliage of water lilies and lotus is identical to that of trees, and there has been research published that marsh grasses are dying for "unknown" reasons.  All these habitats that are in retreat provide food and shelter for fish.


Here are some headlines, with a couple of bonus videos at the end:


It started of course with the red-wing blackbirds in Arkansas, followed by simlar reports from Louisiana and Kentucky.


Then came more, from afar:


Hundreds of snappers wash up on New Zealand beaches. 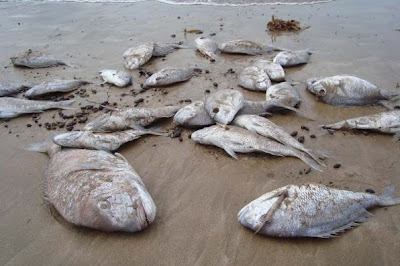 
Birds "scared to death" in Sweden.  This is of particular interest because NONE of these episodes has been attributed to a definitive cause, and speculation is rampant - what makes most sense is this veterinarian's obscure observation:


"Wirdheim noted that the affected bird species in the US are also those who spend the night in large flocks. He added that the birds' situation may have aggravated because they are weakened.


'This winter has been unusually tough and jackdaws may be in poor condition. That makes it easier for them to fly into different objects. There is very little food in the wild compared with previous years and I see dying birds every day,' he said."


Birds fall from the sky in Louisiana.


Eagles and birds fall from the sky in China. 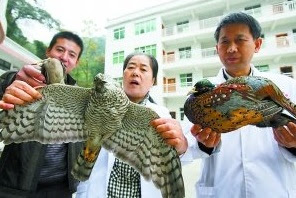 Fish dying all around the World.


Thousands of doves dying in Italy.


Tens of thousands of dead crabs wash ashore in England. 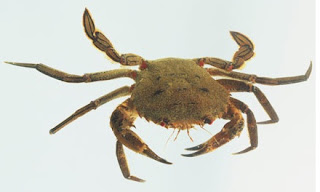 One Hundred Tons of dead fish in Parana. 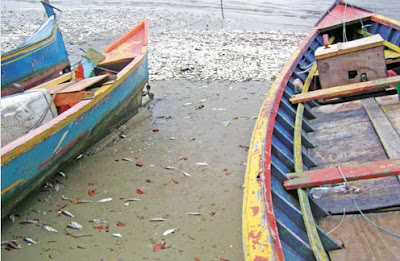 Here's a map of recent animal deaths, and another with links to news reports. 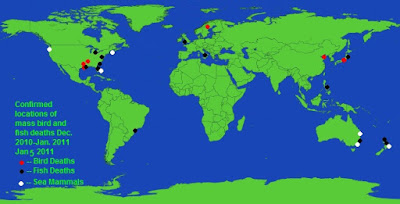 These recent deaths should be put in the context of ongoing rapid and precipitous population declines of many other species as recorded earlier at Wit's End - such as snakes, bees, bats, and the big predators like tigers and polar bears.  Plus, lo and behold, scientists have suddenly decided that ocean acidification is ALREADY having an impact on shellfish, not only at levels projected by models for the future, but now.  Which isn't very good, because billions of people rely upon seafood as their staple protein.


Thus, considered with reduced crop yields from ozone as well as extreme floods and droughts, it should be no surprise that food prices are rising.

Dead fish in Maryland.
Posted by Gail Zawacki at 10:24 AM