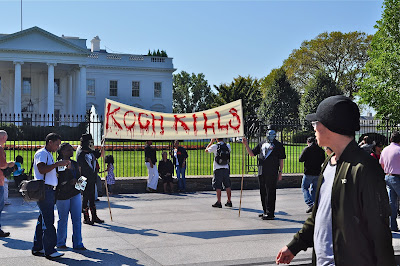 These are the Climate Zombies at the White House last fall.  What are Climate Zombies?  They are the lies that dirty fuel industry-sponsored climate change deniers repeat again and again, no matter how many times legitimate science proves them wrong - they just keep rising from the dead, like zombies!!
The blog Skeptical Science slays the zombies - check it out!

This is the flyer distributed last October 10, 2010 - at a rally in front of the White House for climate action sponsored by the Global Warming Education Network and 350.org.   Today, Climate Zombies are back to confront the Kochs at their conference in Rancho Mirage, California.  Here's what the bill says on the back:
Climate Zombies Bought Your Vote!
Corporate money is polluting our legislature and government agencies just as their products are polluting our air and water. Billionaires like the coal-­rich Koch brothers are financing a well-­orchestrated campaign of lies to confuse the American public -­ exactly like the tobacco companies waged a marketing war to keep consumers addicted to cigarettes for decades.


Find out more about these criminals and what you can do to stop them from destroying our country at http://witsendnj.blogspot.com
This blog, Wit's End, is mostly about trees and vegetation, and how it is dying incrementally, at a rapidly escalating rate, from exposure to toxic background ozone.  Tropospheric ozone is derived from precursors released fuel combustion emissions, which also produces CO2 - the most ubiquitous greenhouse gas causing our climate to dangerously destabilize.  For more information, visit the Basic Premise page at the top of this blog.  But for today the focus will be on the Koch Brothers - later I will post pictures from the demonstration in front of the resort, and the Climate Zombies holding aloft our banner that proclaims "KOCH KILLS."


The dying of trees (and all other vegetation) poses an existential threat that is even more urgent than climate change from CO2 - dangerous as that is - because it poses an immediate reduction to our food supply, not to mention every other species that rely on plants for food.  It's critical for people to understand that climate criminals like the Koch brothers are spending enormous sums of money to bury the facts and confuse the science.

Right-wing ideologues own the the mainstream media, and anyone who relies on American television and radio for full and accurate information is being deluded.


We must convert to clean energy - on an emergency basis! - to prevent the worst consequences of climate change that will continue to worsen into the foreseeable future.  An even greater imperative, is that we must stop burning fuel now to rescue plants, which are the base of the food chain...or mass starvation will ensue.

Why target the Koch brothers?  Well, they're loathsome assholes, that's why.  And collossal hypocrites....and contemptible social climbers - using not talent or wit or knowledge or value to ingratiate themslves to high society, instead they buy their way onto the boards of prestigious institutions like the Smithsonian and the Metropolitan Opera with the most blatantly crass method - money.  What's more revolting than that?   Oh...maybe the craven jerks that accept and reward them, when they should be shunned by anyone with a conscience!

There are so many references to be found that reveal the machinations of the Koch brothers - following is a somewhat random if incoherent sample.  Enjoy!

The original spotlight on the Koch activities was Jane Mayer's article in the New Yorker, "Covert Operations:  The billionaire brothers who are waging a war Against Obama." which has the most vivid and complete investigation into the Crimes of Koch, although much as been published since.  I won't even post a a single excerpt because the entire thing is a must-read, an amazing expose of the way things really work in America, where corporations now have the same rights as humans, and none of the responsibilities.

This article explains how minions such as Paul Singer, who are paid by the likes of the Koch brothers, spread their vile lies.

Even more insidious is the influence of operatives such as the fellow known as Lefohn, whose nefarious psuedo-science I reported on in this post, along with the activities of the "Air and Waste Management Association" - folks who are too smart to deny climate change, but rather, their intent is to squeeze more obscene profits from cleaning up the messes they have made, as mandated by the government they control - all funded by you and me! 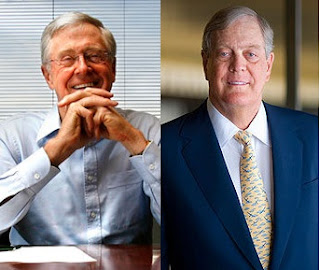 Here is a rare intelligent NYT Op-Ed:  "The Brothers Koch and AB32."

A review of the Mayer piece in the New Yorker with fresh analysis and more links, is titled "It's the Real Thing:  The Power of Koch."