Christmas is over so it's time to catch up with the onslaught of studies and reports about our failing life support systems.  I was so happy to have my three girls all in one place together, which doesn't happen nearly often enough. 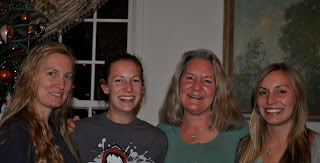 It's a bit ironic - given my obsession over the death of trees for over two years now - that for our totally irreligious family the heart of the holiday has always been a pagan worship of the tree.  My kids usually insist we buy one that is so big it smashes into the ceiling.  This year I got away with a more modest size. 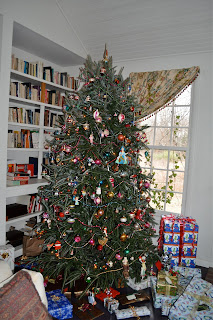 I have been hunting for old hand-painted ornaments and glass chains from the 1950's at yard sales for years - since that is what I grew up with - and we all feel quite reverential towards those too. 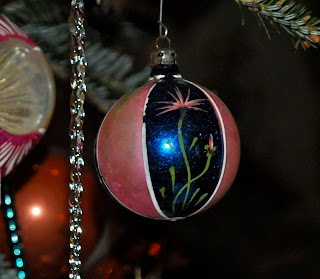 There are a few special home-made keepsakes like Maxine's popsicle stick tooth fairy. 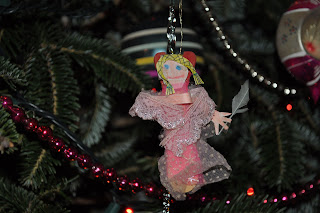 Of course since first daughter is named Alice, any time I came across an Alice in Wonderland ornament I had to add that to the collection. 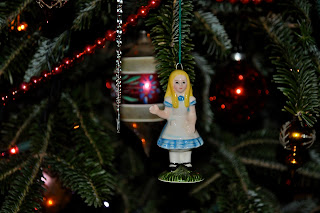 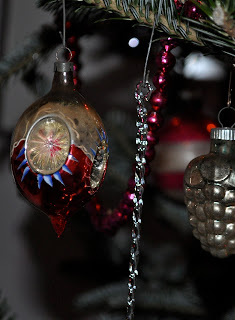 The other irony is that the daughters insist every year we must have the excessively elaborate Buche de Noel for dessert.  It's aways rather stressful to make because each of the components is liable to fail - the meringue mushrooms could refuse to hold a shape and wilt, the delicate cake is prone to sticking and breaking when being rolled, the pastry cream that fills it could be lumpy, and the chocolate butter cream is wont to curdle.  All of these disasters and worse (drop it on the floor?) have happened more than once in the past.  But this year, everything was perfect! 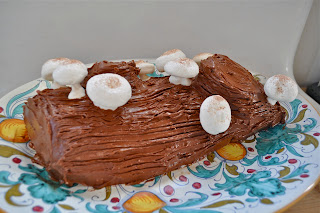 To get back to the topic of this blog...dying trees and what precisely is killing them...following is my favorite section of Forest Encyclopdia Dot Net which was fowarded by Highschooler, where it is quite explicitly explained that trees that are exposed to environmental pollution, such as acid rain leading to calcium depletion in soils, are more vulnerable to insects (best parts in red):

"Emerging Examples in the United States and Europe

In addition to the well-established connections between Ca depletion and tree health outlined above, new associations between the Ca status and health of trees periodically emerge—particularly in regions that experience continued pollution-induced Ca leaching. Differences in the susceptibility of eastern hemlock trees to damage by the hemlock woolly adelgid (HWA; Adelges tsugae Annand) in the Northeastern United States may provide an example of this. The HWA is a small, aphid-like insect that was likely introduced to the mid-Atlantic States from Asia in the 1950s and has since expanded its range and influence, devastating hemlock forests over an ever-widening portion of eastern hemlock’s native range (Orwig and Foster 1998). Although it was first believed that little or no variation in susceptibility to HWA damage existed among hemlock trees (McClure 1995), recent work has shown that differences in site conditions and the presence of other stressors are associated with differential damage and decline (Orwig and Foster 1998, Sivaramakrishnan and Berlyn 1999). 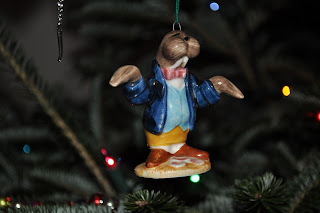 In particular, Pontius and others (2006) recently concluded that foliar chemistry was linked to the infestation and susceptibility of eastern hemlock to HWA. Among other evidence, results of a regional monitoring effort showed that concentrations of Ca, K, N, and P were strongly correlated with HWA densities (a driving factor in hemlock decline). From this and other findings, they hypothesized that, whereas foliar N and K concentrations may influence hemlock decline through an alteration in insect behavior due to palatability issues, Ca and P concentrations may deter severe HWA damage through an alteration in tree physiology (Pontius and others 2006). Experimental tests are needed to assess whether these changes in physiology involve Ca-induced alterations in plant stress response systems. 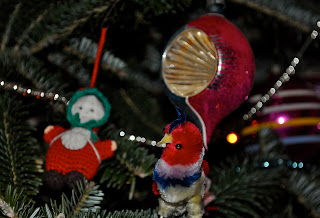 Evidence of acid deposition damage to forest health and productivity in Europe is anything but new or emerging. Indeed, media attention and resulting public concern about the possible connection between pollution exposures and forest death (Waldsterben) helped spur initial efforts to control acidifying pollution additions (Kakebeeke and others 2004). Research eventually identified pollution-induced cation depletion (particularly Mg and Ca) as an instigating component of forest decline (Schulze 1989). Although the mechanism through which acid deposition influences the health of European forests has not been explicitly defined, it is generally agreed that it acts as a predisposing agent, weakening forests and making them more susceptible to damage by other stresses including insect attack, extreme climate events, or storm damage (Materna and Lomský 2002, UNECE 2004). 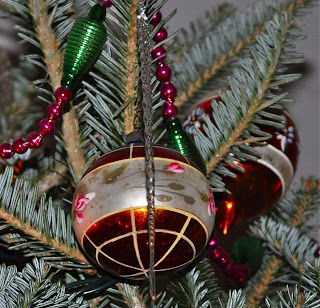 This scenario is strikingly similar to the Ca depletion and stress response suppression hypothesis developed primarily using evidence from declines in the United States (Schaberg and others 2001). In fact, a recent example of forest damage in Europe that is thought to be predisposed by pollution exposure involves the reddening and abscission of foliage of Norway spruce in the late winter, presumably due to freezing injury (Lomský and Šrámek 2002, Materna 2002). Patterns of injury (preferentially impacting the youngest foliage with the intensity and extent of damage increasing with elevation, Lomský and Šrámek 2002, Materna 2002) are identical to those documented for red spruce winter injury (DeHayes 1992, Lazarus and others 2004), which has been mechanistically linked to Ca depletion (see previous section)." 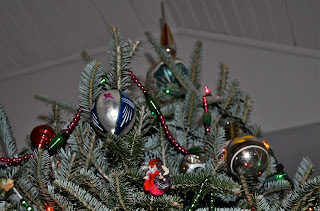 Following is a story about the reduced yield of tea - another example of the mounting evidence that vegetation is declining, which is most usually blamed on climate change - as well as the aforementioned insects (or fungus, or disease) - even as it is acknowledged that heat and drought cannot fully account for the observed changes!

Mridul Hazarika, director of Tocklai Tea Research, the oldest tea research station in the world, said rainfall and minimum temperature were two of the most important factors affecting both quality and quantity of harvests.

'The decline has been taking place although there has been an increase in the area of tea cultivation as new gardens have come up, and many gardens have added new areas for tea plantation. This is an indication of the seriousness of the threat,' said Hazarika. Efficient rainwater harvesting and new breeds of tea plants were needed to reverse the trend. 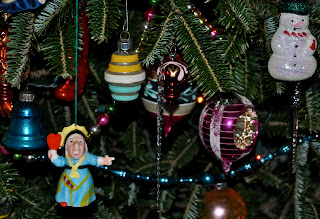 'Changes have already been observed in the flavour, but it is not possible to blame only climate change for this," he said. "Other factors like the fertilisers used and cultivation methods might also be partly responsible.'

The changing taste of Assam tea is a serious concern for growers. Sudipta Nayan Goswami, an Assam-based planter, said subtle changes had already been observed: 'The flavour has changed from what it was before. The creamy and strong flavour is no more.'

'There is a huge demand for Assam tea abroad, and this is due to its strong, bright flavour. The changes will sharply hamper the demand for this variety of tea abroad.'" 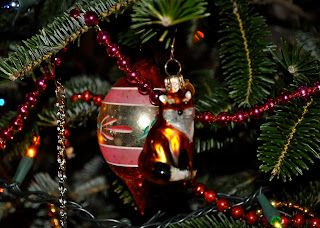 Does anybody besides me see a PATTERN here?  For good measure, here's a link to a story about the extremely alarming decline in the yield of wheat, a global food staple.  Stock up on flour. 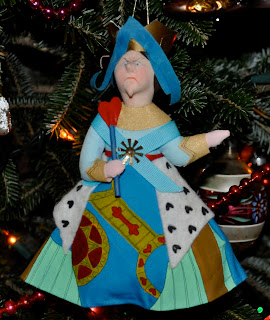 What was it that the Red Queen said?  OFF WITH THEIR HEADS.   His.
Posted by Gail Zawacki at 6:09 PM