Nothing but sky, the sound of the water, and the water's reply

The End of the World

“We're going,” they said, “to the end of the world.”
So they stopped the car where the river curled,
And we scrambled down beneath the bridge
On the gravel track of a narrow ridge.

We tramped for miles on a wooded walk
Where dog-hobble grew on its twisted stalk.
Then we stopped to rest on the pine-needle floor
While two ospreys watched from an oak by the shore.

We came to a bend, where the river grew wide
And green mountains rose on the opposite side.
My guides moved back. I stood alone,
As the current streaked over smooth flat stone.

Shelf by stone shelf the river fell.
The white water goosetailed with eddying swell.
Faster and louder the current dropped
Till it reached a cliff, and the trail stopped.

I stood at the edge where the mist ascended,
My journey done where the world ended.
I looked downstream. There was nothing but sky,
The sound of the water, and the water’s reply. 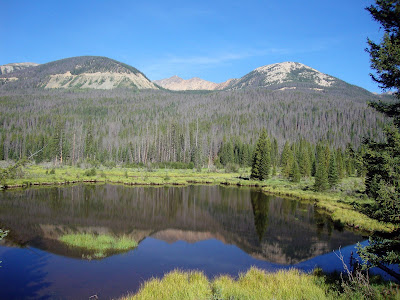 To listen to many foresters, you would think the threat to trees is limited to the bark beetle epidemic in the American West - even though all species of trees, all over the world, are dying from absorbing ozone and exposure to reactive nitrogen from industrial processes.  The pictures below, of Saguaro National Park, are from the US Park Service. Bark beetles aren't a factor in this very obvious reduction of health and vigor.  Yet the condition of the cacti reflects the decline of the largest specimens of vegetation - which is occurring in every biome on earth.  You would think some savvy researcher would realize that it is no coincidence, and look for the common factor, which is the toxic composition of the atmosphere.  The reduction in air quality isn't any mystery - just compare the wild mountain slopes in 1935 to the proliferation of buildings in 2010, with accompanying roads and pollution. 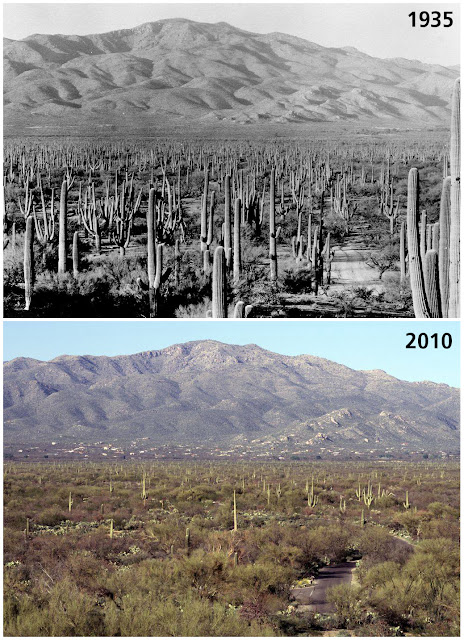 Below are olive trees in Corsica, dying of a pathogen that is expected to infect the rest of Europe.  I will have much more next week about the death of forests, but for now, what follows is the transcript from this week's Dispatch from the Endocene at Extinction Radio. 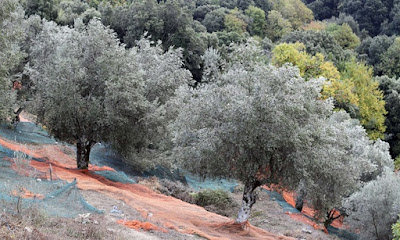 Thanks Gene, and welcome listeners to the 21st Dispatch From the Endocene.

Each time when I prepare this program I find there is a multitude of new evidence that our species, called sapiens, or wise, would be better named Homo Eradicatus.

Following are a few reports which in their diversity remind us of the myriad and unexpected ways that we are eradicating other species on our planet.

First, some ecologists are warning that one third of the world’s freshwater fish are at risk if the dozens of dams being planned are ever built.  Despite the reputation hydroelectric generation enjoys for being a source of clean energy, it is anything but.  I will leave a link on my blog to the excellent movie “Damnation”, which looks at consequences in the US.  This latest report refers to government intentions to construct 450 dams in places once considered too remote to access - in the Amazon, Congo, and in Asia.  We apparently have learned nothing from the disasters that have already been built.

One of the most amazing recent studies tells us that melting ice means more than rising sea levels and loss of albedo.  Thick ice blocks light from reaching the water below, and the creatures that inhabit that unique environment are not adapted to the light that will increasingly penetrate the depths.  Researchers are attempting to model what the change will mean if algae displaces invertebrate communities, and what impact that will have in turn for fish populations such as herring, capelin and mackerel.  The bottom line is no one knows exactly how this will interact with stratification of fresh and salt water as the ice melts, acidification, and warming temperatures.  What IS crystal clear is that the reach of Homo Eradicatus extends even to places we have never actually been.

But perhaps this is irrelevant, as we are emptying the seas, according to a report published in the journal Nature Communications.  The researchers analyzed the global fish catch and determined that between 1950 and 2010, more than 35 billion tons of fish were caught than was reported.  Around nine percent is discarded as unwanted bycatch from mass trawlers looking for more marketable products like shrimp.  This illegal or unregulated plunder is reflected in the difficulty now encountered in locating healthy populations to fish.  Many species are on the brink of collapse which is resulting in what one of the authors called the “luxurization” of, for example, the once common cod.

Many people live their entire lives without ever seeing a bat and perhaps without giving them a thought, even though they are vital pollinators, seed dispersers and consumers of insect pests.  According to an article published by the Climate News Network, there are more than 1,100 types of bat that many under threat from human activities ranging from wind turbines to drought from global warming.  Researchers suspect warming may interfere with their ability to detect prey.  Populations have been decimated by a fungal disease, and it is unknown what stress has caused them to become so vulnerable.

A comprehensive study of mass mortality events, handily acronymed as MMEs, looked at 727 published reports around the globe and found a major intensification for numerous animal species.  First consider the enormous magnitude of an episode that qualifies for the designation:

“…removing more than 90% of a population, resulting in the death of more than a billion individuals, or producing 700 million tons of dead biomass in a single event.”

“…the increase in MMEs appears to be associated with a rise in disease emergence, biotoxicity, and events produced by multiple interacting stressors…In addition, MMEs with the largest magnitudes were those that resulted from multiple stressors, starvation, and disease.”

That study is from 2014, and as recorded in an article in the Washington Post recently, the MMEs are continuing to increase.  You can read about sea birds, bees, whales, antelope, and corals, and more - including of course, trees.

I noticed that Sam Carana posted in his Arctic News blog that “Annual mean carbon dioxide levels measured at Mauna Loa, Hawaii, grew by 3.17 ppm in 2015, a higher growth rate than in any year since the record started in 1959.”

This is despite the global slowdown in the economy, and it is exactly what you would expect when trees are being poisoned by pollution and the forests are in decline around the world, subject to opportunistic attacks from epidemics of insects, disease and fungus.

Perhaps this impending scarcity of trees explains why no fewer than dozens of companies in Spain have been digging up thousand year old olive trees for the last two decades, and selling them to wealthy foreigners who want them as garden ornaments in northern Europe and even in places as far off as the US and the United Arab Emirates.  This despite they often don’t survive the journey, and if they do, often die prematurely.  To top it off, a pathogen has been killing olive trees in Italy and is expected to spread across Europe.  Strains of the bacteria are able to infect forest trees such as oak, sycamore, ornamentals like oleander, and orchard crops like citrus, cherry, almond, grapefruit, and peach.  As usual, foresters blame recent invasive species instead of pollution, even though bacteria spores have been found to literally travel on the wind.

An article in Smithsonian explains that “recent research suggests that microbes are hidden players in the atmosphere, making clouds, causing rain, spreading diseases between continents and maybe even changing climates.

A NASA scientist was astonished when he sampled air collected in Oregon and found living bacteria and fungus that originated in Asia.

"I regard the atmosphere as a highway, in the most literal sense of the term," he was quoted in the article. "It enables the exchange of microorganisms between ecosystems thousands of miles apart, and to me that’s a more profound ecological consequence we still have not fully wrapped our heads around."
Thanks for listening to Dispatch from the Endocene - at the close of the hottest year in human history, and the beginning of what NASA anticipates will be an even hotter 2016.