My  introduction to climate change came from Al Gore, in his 2006 award winning An Inconvenient Truth. I became aware of the issue, but never gave it much more thought. It wasn’t until I heard former head of NASA's Institute for Space Studies, James Hansen, on CBC in 2009 that I became really interested in the issue, and started researching it online and reading avidly about it on The Economist. Over the next 3 years I would read over 100 books on climate, energy and related, and countless websites. For my favorite books and documentaries see my blog bio.

The books that hit me hardest was James Hansen’s Storms of My Grandchildren, James Lovelock's The Vanishing Face of Gaia, and Tim Flannery's The Weather Makers. Of countless documentaries, the best were The Age of Stupid, 6 Degrees Could Change The World, and Collapse by Jared Diamond. I was flabbergasted. The injustice! We were screwed. There was little to no hope. Serious scientists were predicting famine and war caused by climate change in the near term. In his books, James Lovelock presented evidence that the IPCC is highly conservative, and what they're predicting for 2040 might well come by 2025. This spells disaster for Africa. My family lives there. Then the Occupy movement erupted in 2011. I was ecstatic. Change! I met tons of great fellow activists there and made life long friends. I finally had a place to express my activism. I’d do activism with the Occupy group but sometimes I’d also go alone to the university and show off my climate artwork. These were full size 1 metre tall paintings. 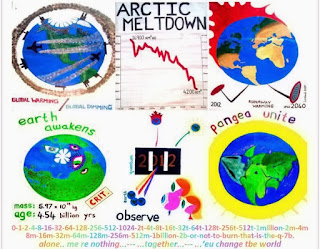 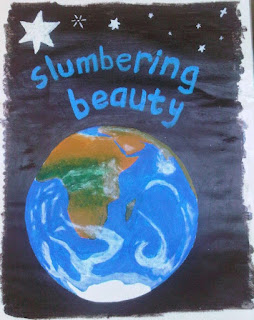 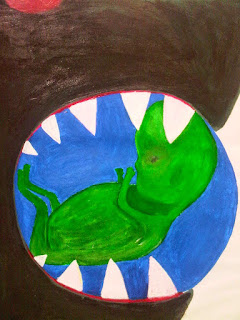 Some students stopped to look, others didn't. It didn't matter, activism was the only thing giving me hope and in mind felt like the only thing that mattered. One day Professor Andrew Weaver walked by and stopped to look at my artwork and quotes. He was impressed and chatted with me. I was ecstatic – I got to talk to Andrew Weaver! Suddenly it was all worth it. To do more climate activism, and get a sense of accomplishment, I intended to cycle across Canada in 2011, and made it from Victoria to Calgary with flyers and a trailer that advertised climate change, but I fell incredibly hard and injured myself when I raced downhill without holding the handlebars. My dogs in the trailer flew overhead and I crashed hard into the rocky roadside. There were tons of cars on the highway so I'm glad I or my dogs didn't topple into traffic. Lesson learned - hold the handlebars! I didn't hand out any flyers because I didn't like what I had to say, and also I'm quite shy to approach people.


In 2012 a particularly disturbing piece of news arrived, the discovery of thousands of methane plumes, some over a km in diameter, erupting from the East Siberian Arctic Shelf. This can be seen here. I, and many of the people on the forums I went to, genuinely believed we were at the start of runaway climate change, and if you asked me today, i'd still say there is strong evidence that we may have multiple passed tipping points that will trigger runaway climate change, the biggest being the Arctic sea ice albedo change, the snowline albedo change, and the subsea methane hydrates. Some within the climate movement argue there is no danger of large methane releases. These people include David Archer and Gavin Schmidt. We must remember that these two are climate modelers, making theoretical models on computers. People like Natalia Shakhova, Igor Semiletov, and Peter Wadhams have been in the Arctic and East Siberia the past ~15 years via ships and submarines, studying the conditions, and they have observed great changes and are warning society about it. Their warning come not on models but through physical observation. Before the ozone hole was discovered, modelers too claimed an ozone hole wasn't possible. Once James Lovelock invented the tool to detect CFCs a hole was discovered above Antarctica that proved modelers wrong. In the near future, large methane releases will prove the methane modelers wrong. 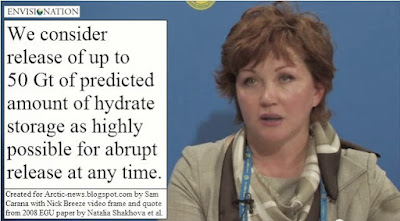 Anyway, in 2012 I wanted to start up the idea that we should shoot for not an earth hour or earth day, but an earth year, a year in which everyone on earth devotes their attention to solving the crises of climate change, pollution, deforestation, over-fishing, ect. I once again attempted to cycle across Canada. I left with the Occupy group walking across Canada, but soon broke off to hit Camosun college. Again, I didn't have any success handing out flyers. My bicycle broke down soon after so I walked home. I became ill from stress and spent some time in the hospital psyche ward.


Summertime Arctic sea ice is in rapid decline and could be gone by the end of the decade. When the Arctic sea ice is gone this is known as a blue ocean event. Heat a pot of water with ice in it and you will see the temperature hovers around 0 while there is still ice, then rapidly warms up once the ice is gone. It takes an enormous amount of energy to melt ice. This is because of ice's energy of fusion. This means things get very hot very fast once that ice is gone, and this can lead to methane hydrate destabilization. The result of this according to Peter Wadhams (eminent world expert on sea ice) is an abrupt climate change that civilization could not withstand. The blue ocean event will only last a few weeks at first, and within a decade or two might be year-round. Under such circumstances, it is inconceivable how methane hydrates will stay locked up on the Arctic ocean floor. According to Paul Beckwith, (Professor at the UofOttawa doing his PhD in abrupt climate change) this process could raise temperatures to 6 C by 2025-2035, unless geoengineering is applied. Paul describes us as being at the beginning of an abrupt climate change phase that could continue rising to 10 or 11 C. New Zealand's  pre-eminent climate scientists Jim Salinger says we are now in abrupt climate change. Temperature rise might not stop at 6 C, and might continue to rise to 8 C and beyond by 2200, according to Hans Schellnhuber (directer at the Potsdam Institute for Climate Impact Research)  which would mean hydrogen sulfidication of the atmosphere and oceans, and complete extinction of land mammals. Hans Schellnhuber assumes a slow release of methane in his calculations. According to Malcolm Light, sea ice loss and methane hydrates could push temperatures to 4C by 2030 and 8C by 2050. It might not stop there. There are such massive methane reserves below the Arctic Ocean floor (more than 5000 billion tons of methane carbon) that they represent around 100 times the amount that is required to cause a Permian style major extinction event, should about one percent of the sub-sea Arctic methane be released into the atmosphere. 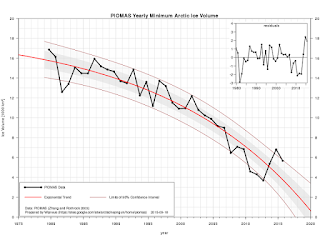 According to Malcolm Light a 50-90% emission reduction by 2020 and a variety of geo-engineering techniques can dramatically slow down or even reverse the extinction process. Even if we believe the highly conservative IPCC's targets of 85% reduction by 2050 to have a 50% chance of limiting warming above 2 degrees,  it's still a tall order. And it`s certain the IPCC is wrong. The IPCC is a highly conservative organization in their predictions, and their "carbon budget" is heavily influenced by special interests. We can't burn anymore fossil fuels. We have to stop today. Once you pass 2 degrees, positive feedbacks that cause a runaway climate are sure to occur in full force. They are occurring right now at 0.85 C. Another problem, global dimming, caused by sulfur released during coal burning and bunker fuel burning, reflects sunlight and so temporarily combats global warming. Over the past 15 years, China has so massively increased their coal burning sulfur pollution that global dimming is masking the full effect of global warming by about 1.2 degrees, so we're already well past 2 degrees C if civilization suddenly stops industry and doesn't replace the aerosols with geoengineering. And aerosols only stay in the air for months, while CO2 stays for tens of thousands of years. Recently the IPCC chair Rajendra Pachauri said parts of Africa will lose 50% of their crop production by 2020. Seriously? This is a disaster. But is it really too late? Is doing something better than doing nothing? Is activism still worth it? I believe the near term climate collapse argument but I also believe we will geo-engineer in desperation, and it will somewhat work, buying us precious years. The proof is in global dimming. Sure there will be losers, but maybe the world will come together, people will eat vegetarian, and there will be enough food to spare to the starving countries. Maybe I'm just dreaming. Is Jeremy Rifkin right that we are an Empathic Civilization? Or are we crude, selfish, short-sighted, and greedy? If i'm 99% sure that we’re going to experience an extinction event in the coming decades, can I live off 1% hopium? Don’t take my hopium away. James Lovelock, you took our collective hopium. You left us bare and naked. And then you have the gall to retract your two books, saying you, Tim Flannery, Al Gore, and whoever else were alarmist? Did you retract because you genuinely believe things will progress slower than you predicted in your alarming books, or because you feel bad about making people hopeless? Are the recent death plunges in Arctic sea ice, and methane erupting from the East Siberian Arctic Shelf not evidence that things are progressing much faster than expected? 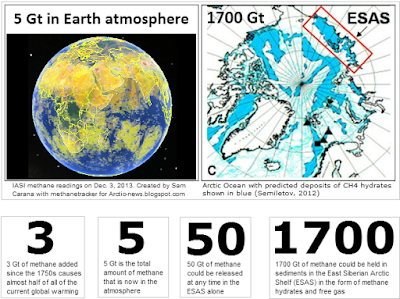 Canada will be one of the most favorable places in the world to experience climate change, and Africa one of the least favorable. As James Lovelock would say, "move north young man". I wish I could find a way for my African family to migrate. Mostly likely, they will remain stuck behind when Africa collapses. Nonetheless, if society collapses because of a 3-4 degree C rise in temperatures, or does not massively engage in geoengineering, everyone will most likely die. We are only buying time. According to Dr. Ira Leifer world carrying capacity is predicted to be just a few thousand at 4 degrees C. Do we really want to test his prediction? And don't think we will revert to hunting and gathering in the Arctic and Antarctic - most large edible animal species will be dead and the hydrogen sulfide coming out of the oceans will be poisonous to breathe.
Packing up and migrating, leaving old friends behind, is hard work. Those people who are heavily invested in the land will probably stay behind and suffer first from climate change. Those with nothing to lose and are willing to travel, will survive the longest. The world isn't going to fall apart overnight. But the time to move is now. Abrupt climate change is now. Natalia Shakhova, Igor Semiletov, Peter Wadhams, Sam Carana, Paul Beckwith, Malcolm Light, James Lovelock, David Wasdell, Guy McPherson and AMEG can't all be full of shit. It would be really easy to simply paint their work as shit. The prediction of a 50 billion ton pulse of methane releasing from the East Siberian Arctic Shelf any time after 2008 was posited from decades of research. Peter Wadhams, Natalia Shakhova and Igor Semiletov describe it as a high probability event. It's not simply shit. What would be the immediate effect of a 50 Gt release? Well over the short term it would have the power of 5000 Gt of CO2. For comparison, humans emit about 30Gt of CO2 a year. The methane will be localized to the Arctic initially, causing abrupt arctic warming and the release of more methane hydrates.
For quotes from climate books, see climate books blog.
Posted by Gail Zawacki at 5:22 PM