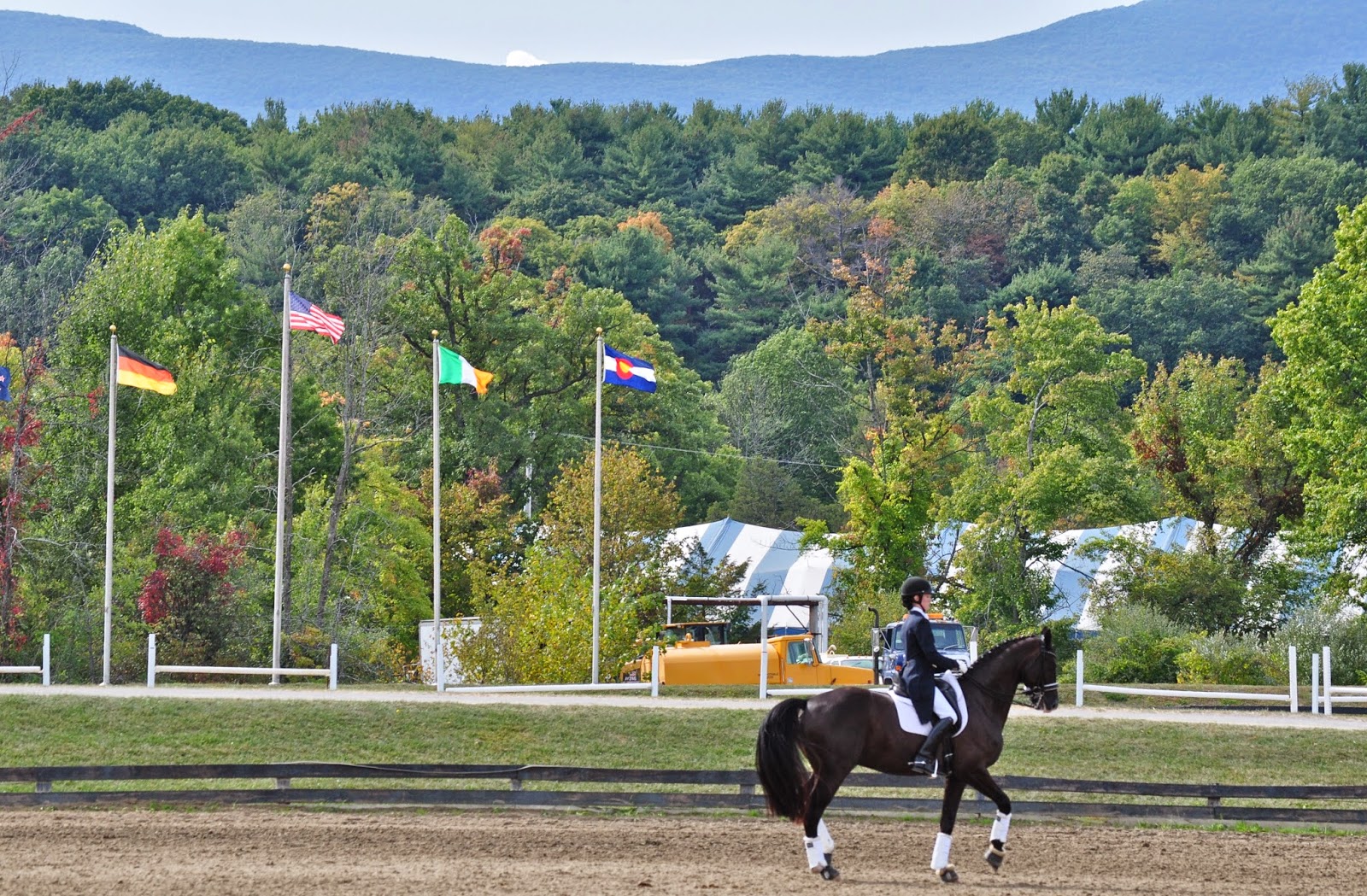 I would have gone to the People's Climate March in Manhattan, even though, as a permitted Sunday parade, I didn't expect it to amount to anything more than tilting at windmills (ha!) - but I had already missed all of first daughter's competitions this season, and her last show for the year, in Saugerties, NY was scheduled for the same day.  I had a lovely weekend with her and was very glad I went, especially as she took two firsts. 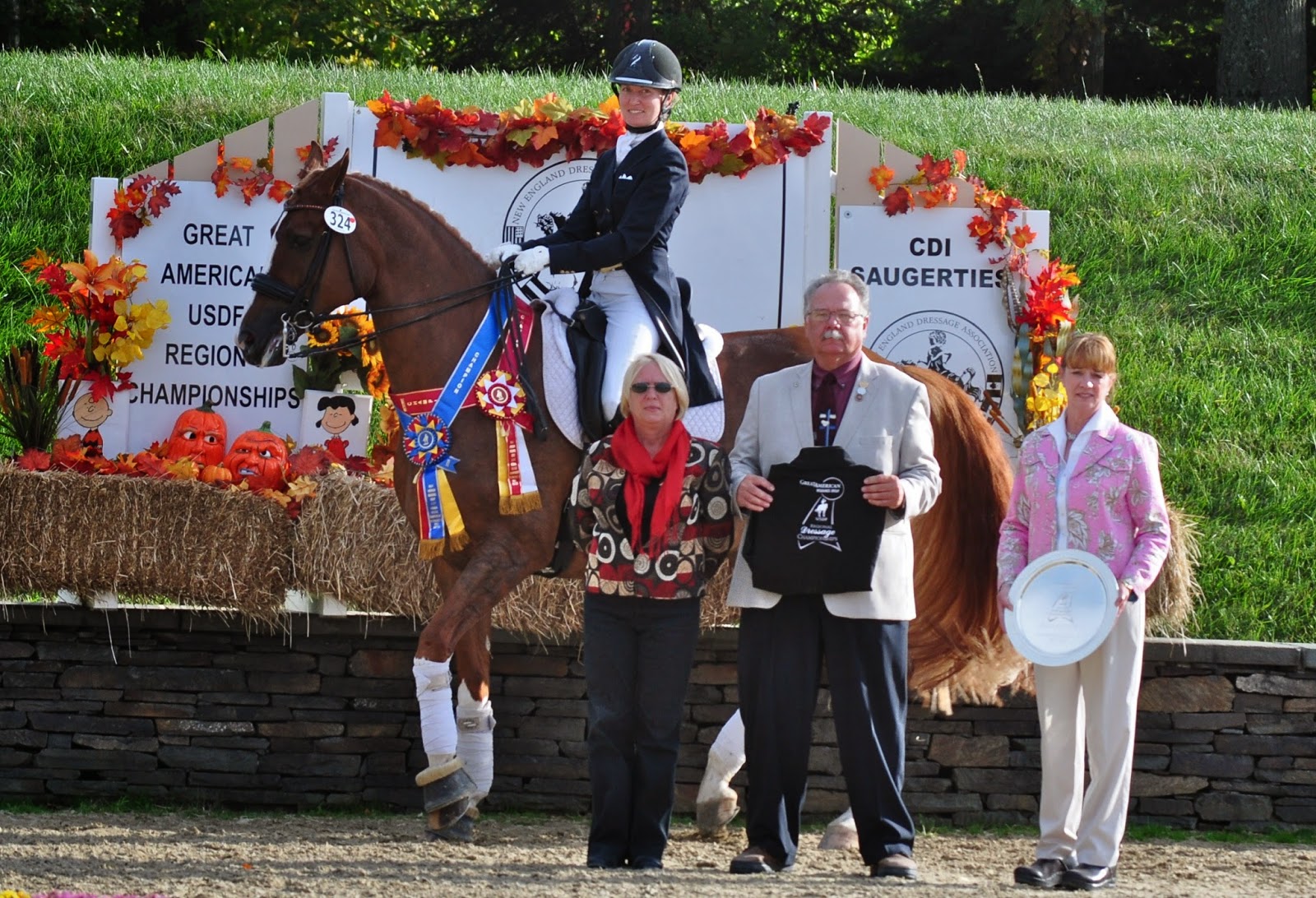 Thus, I was happy having learned there was to be another protest on Monday that I could join, #FloodWallStreet, especially because the plan was for mass civil disobedience and arrests.  I met up with a Wit's End reader, Lucas, who had come all the way from Hawaii and was willing to serve as jail support for me. 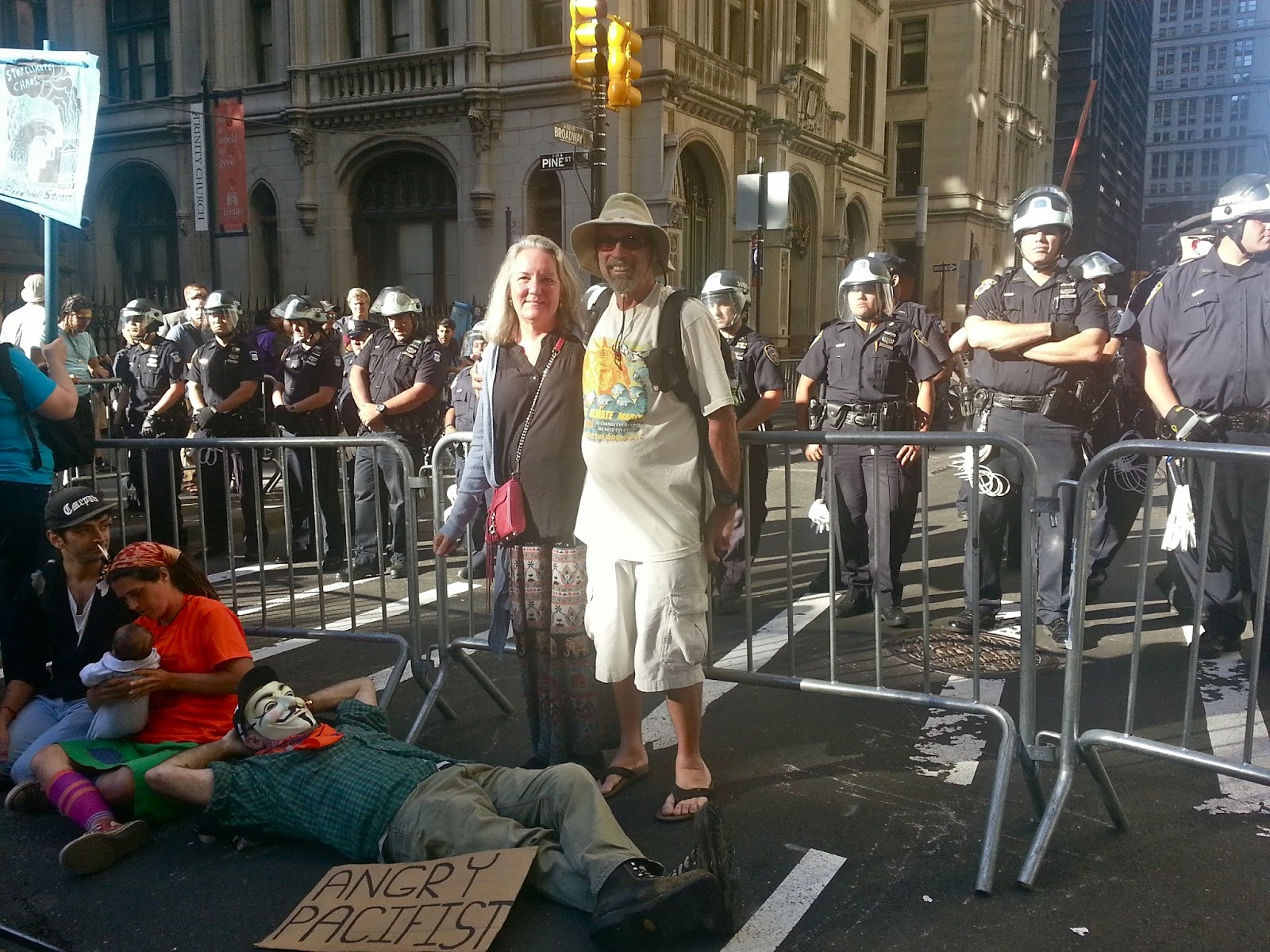 However, the march from Battery Park to the Stock Exchange was deflected, and the big banner buckled backwards around the barricaded Bull while we watched, incredulous, as the organizers negotiated with police.  Apparently the Mayor informed them that there would be no arrests, and we could have the street space AROUND the Bull, but were blocked from approaching Wall Street.  Astonishingly, the organizers informed the crowd that they had made a decision to stay obediently in place, and...declare victory!  Whatever happened to consensus?  There was no discussion, no mic check, we were just informed that rather than exercising our rights, we were to behave just like the Sunday Paraders and, as one commenter phrased it, whimper in a fucking free speech zone.

At one point they encouraged us to sit and thump our chests like our beating hearts, I'm not sure why.

Reactions to the capitulation ranged from indifference to mild surprise to utter fury.  Luckily I had come across a friend from the Age of Limits Conference, Cameron Kelly, who also had traveled a great distance at non-trivial expense to take part in the mass civil disobedience.  She was decidedly in the latter category.  We pointed out to the organizers that the action was presented as mass CD - and the response was that if we still wanted to get arrested, we were free to dive over the barricades flanking the Bull.  However, if my goal was to be arrested for a single personal criminal act, I would rather choose my own symbolic icon...and it wouldn't be about capitalism.  When I pointed out that the action was titled #Flood WALL STREET, and we were stymied at Broadway and Morris, I was informed by several indignant organizers that we actually were *on Wall Street*  - since the financial district and Wall Street are synonymous.  So they conveniently redefined the very meaning of the words "Wall Street"...uhhhh, but what about this MAP they handed out to the marchers (that Camus so rightly wishes to chew up into mush)?   Do you see the arrow for the 12 PM ACTION pointing directly to the NYSE on the actual WALL STREET?? 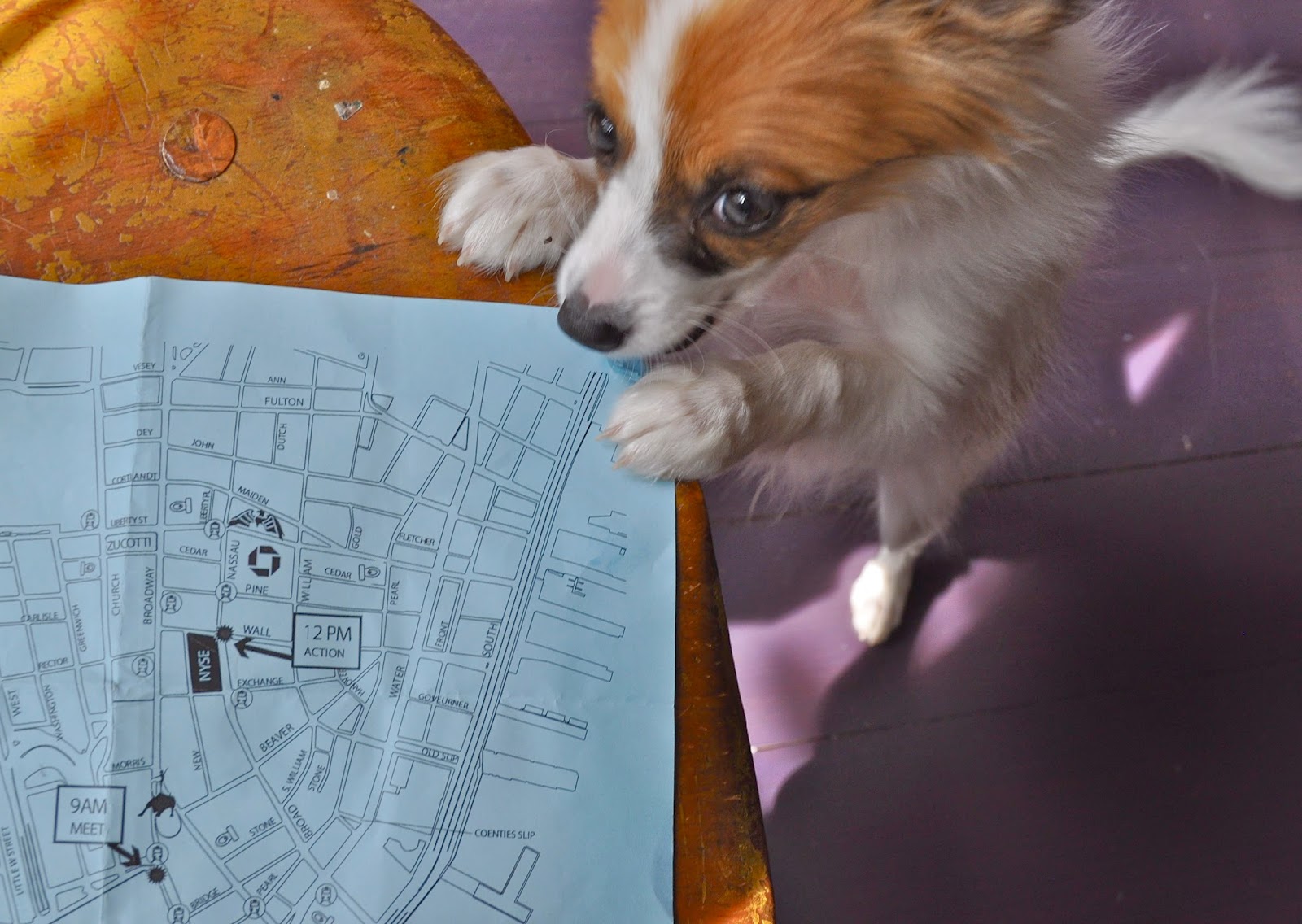 Apparently to mollify the disgruntled, we were informed that 100 free pizzas were being delivered, and that we would sing and dance.  Finally one courageous fellow named Sparks who, having come all the way from Fridley, Minnesota was not about to slink meekly away, bellowed "MIC CHECK" and urged the boisterous but confused assembly to move along to Wall Street.  Here he is with the famous firecracker Cameron, having finally made it to the intersection. 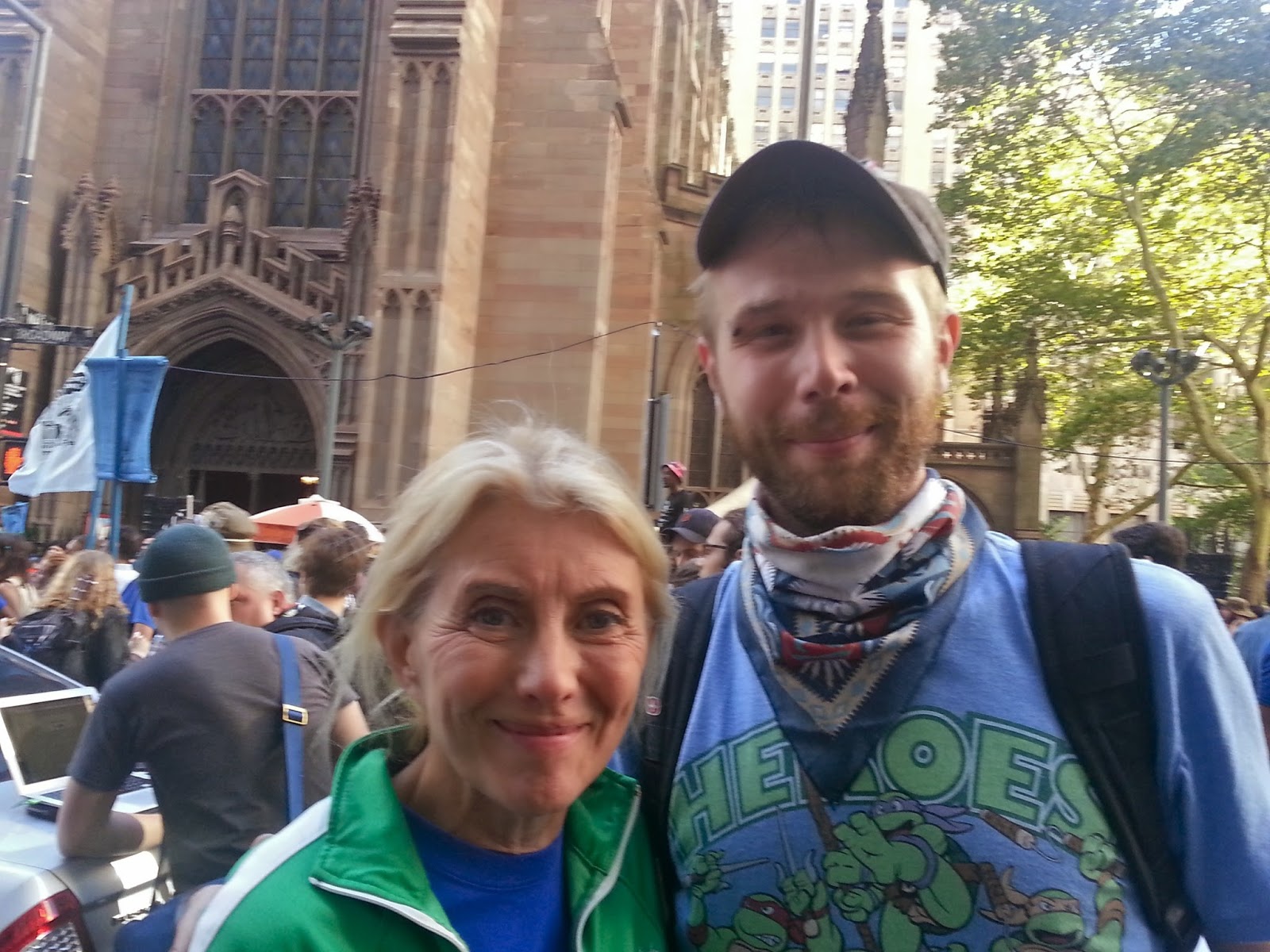 Even after we arrived though, other than a short tussle over the barricades leading to one incident of pepper spray, the pizza party continued in place for hours unmolested, presided over by glowering phalanxes of billyclub-wielding and mounted police.   Not wanting to wait hours more for the order to disperse and having long trips home, Cameron and Lucas and I left around sunset.  It wasn't until after darkness had fallen that finally about 100 people were "allowed" to relinquish their freedom, and were cuffed and bussed to jail.   The Sans Culottes must be rolling in their graves at this pathetic excuse for a revolution.  I don't suppose we'll ever know why the protest turned into a cheesy picnic - whether the organizers were outsmarted by the Mayor, lost their nerve, or are completely intoxicated with ego gratification from media attention - "...oh, we're on the front page of HuffPo right now!" one told me, by way of explaining that no further action on our part was necessary.  Actually, some of the slick promotional material makes the project smell suspiciously of moveon.org funding, which makes me wonder if the Sunday and Monday events, despite their ostensible differences, aren't both just mirrors of each other's deliberate ineffectiveness, like the two political parties in the USA.

The climate activist insiders were in short-lived heaven following the huge turnout for the PCM in New York and other cities around the world.  (Short-lived because nobody has the vaguest idea what to do next and the UN meeting is being widely denounced as a useless corporate festival.) Privately they are rejoicing what they see as the triumph of the climate movement over the environmental movement, something they been trying to eclipse for years. To put the rosiest perspective on this, you might say that they have shunned any association with holistic ecology simply because they believe that being tainted by tree-huggers is detrimental to progress - since hippies have a bad reputation for extremism and dirty toes.
To look at it in a slightly more cynical way, you might conclude that the motivation stems from two pernicious influences...first, that climate change in theory lends itself to continued growth via a technological fix (if you ignore the fact that it's too late to avoid catastrophe, which virtually all activists and scientists do), which leads to the second motivation, a corollary to the first...there is oodles of money from corporate foundations, governments, book sales and speaking engagements for research and political activism in climate "solutions", as long as none of them include reducing population and consumption.
This strategy has always struck me as an epic failure, since climate change is only one symptom of a more general, lethal overshoot.  The single-minded focus on carbon emissions over other issues, such as pollution, habitat destruction, and overextraction of everything from lumber to fish to minerals simply enables more of the same destruction to proceed even as it pretends to challenge the status quo, Naomi Klein and Chris Hedges notwithstanding.  In fact their supposedly more radical critique of capitalism is a red herring, and an insidious deflection of the true dimensions of the tragedy of the commons that has ensnared humans into ecocide.  Underlying their exhortations to change or even dismantle the economic system is the false belief that "green energy" will ensure free pizza forever.  While chants like "We are Unstoppable, Another World is Possible" and "Put up Your Fist, Resist, Resist" are rousing good fun, really, as Candide would say, we ALREADY are in the best of all possible worlds...as in, it ain't gonna get any better than this...and there is no obvious way to resist OURSELVES.  Here's all you need to see of Naomi Klein and her own special brand of bullshit.  (Well, hey, it sells books, apparently.)  [update:   OMG this is too funny.  This video has been taken down - in it, Klein is interviewed on HuffPo saying that so many people have reacted to her book by saying IT'S TOO LATE.  I guess that message was too scary so the record has been deleted.  TOO hilarious!]

Here's a screenshot from the video that has been removed, and here is a link to the clip still up.  This quote from John Gray's Straw Dogs sums up why the narrative she peddles is so wrong:  "The destruction of the natural world is not the result of global capitalism, industrialisation, “Western civilisation” or any flaw in human institutions. It is a consequence of the evolutionary success of an exceptionally rapacious primate. Throughout all of history and prehistory, human advance has coincided with ecological devastation." 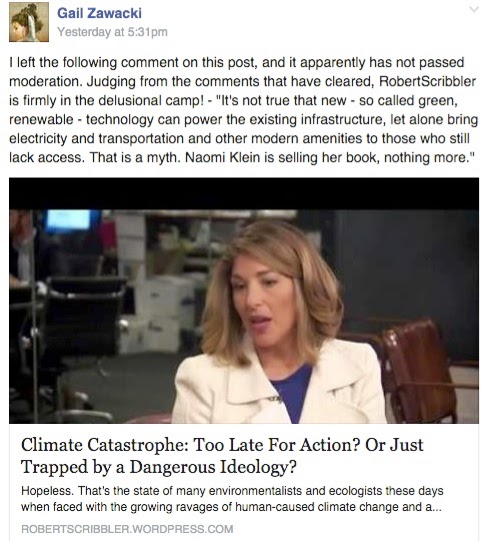 It seems like this cohort of so-called activists, whether prancing in costumes for Sunday's celebrity climatepalooza photo-ops or moaning ineffectually about capitalism on Monday, is persuaded that all we have to do is WANT things to be different (you know, close your eyes and say I DO believe in fairies!  I DO!  I DO!) which is really just an extension of everything that is wrong with the very consumerist society we are urged to reject.  Mention the word "sacrifice" and the entire spectrum frowns.  When I was on my way to the city I was thinking about how many in the doomer community (invariably white middle-class) appropriate the culture of indigenous peoples and claim affinity with their supposed peaceful, sustainable, harmonious and spiritual relationship with nature when actually, most if not all hunter-gatherers (other than those who were defeated by overshoot, natural disaster or neighboring tribes) were proud warriors who trained boys from an early age to be fierce, and to defeat enemies.  The accumulation of ancient weapons, armor, fortifications, skeletal remains and artifacts testify to this universal human attribute.  Contemplating arrest with its very real potential for bodily injury is nerve-wracking, to say the least, and I took comfort from thinking about how tribal people prepared for conflict with an infinite variety of rituals to embolden them.  Too bad this willingness to confront harm isn't the inspiration taken by so many who claim to be "fighting" climate change by tapping on their computer keyboards or designing posters and t-shirts.  Hell, most of them can't even be inconvenienced, let alone put their safety in jeopardy (Tim DeChristopher being a shining exception).  I don't know if it is iphones or football or Cheetoes, but something has turned us into spineless wimps. 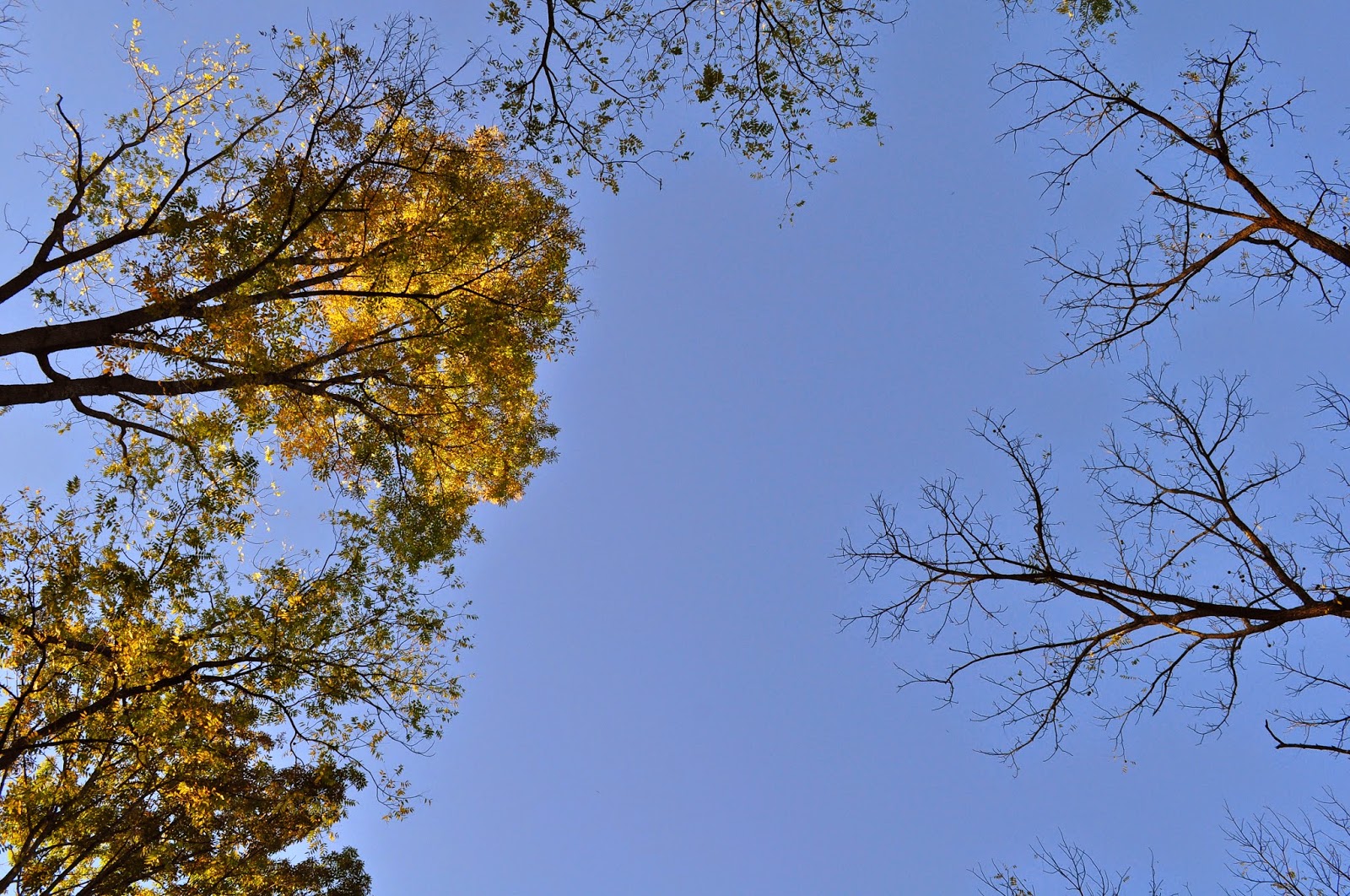 Following are some pictures of trees and leaves around Wit's End. 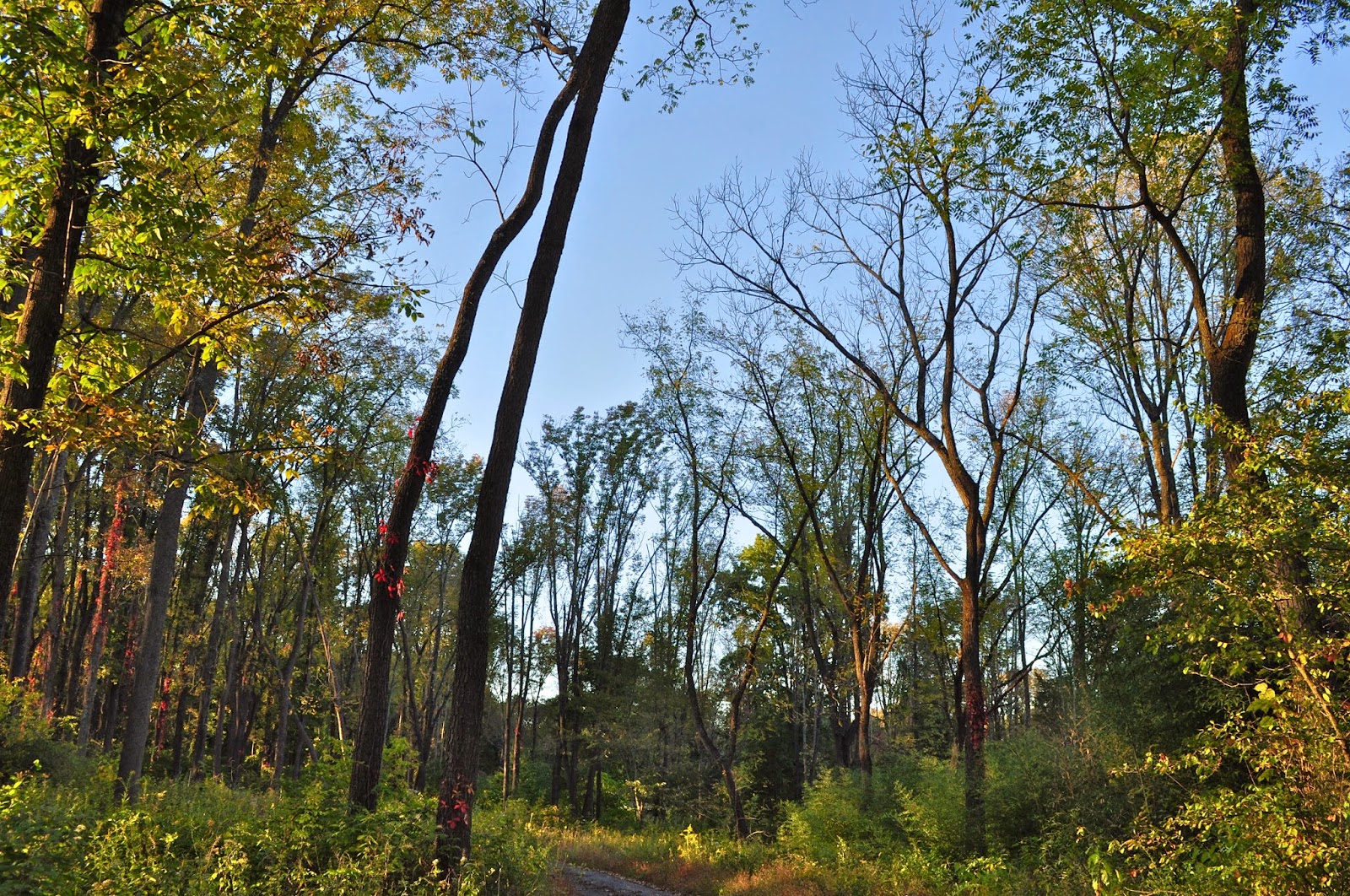 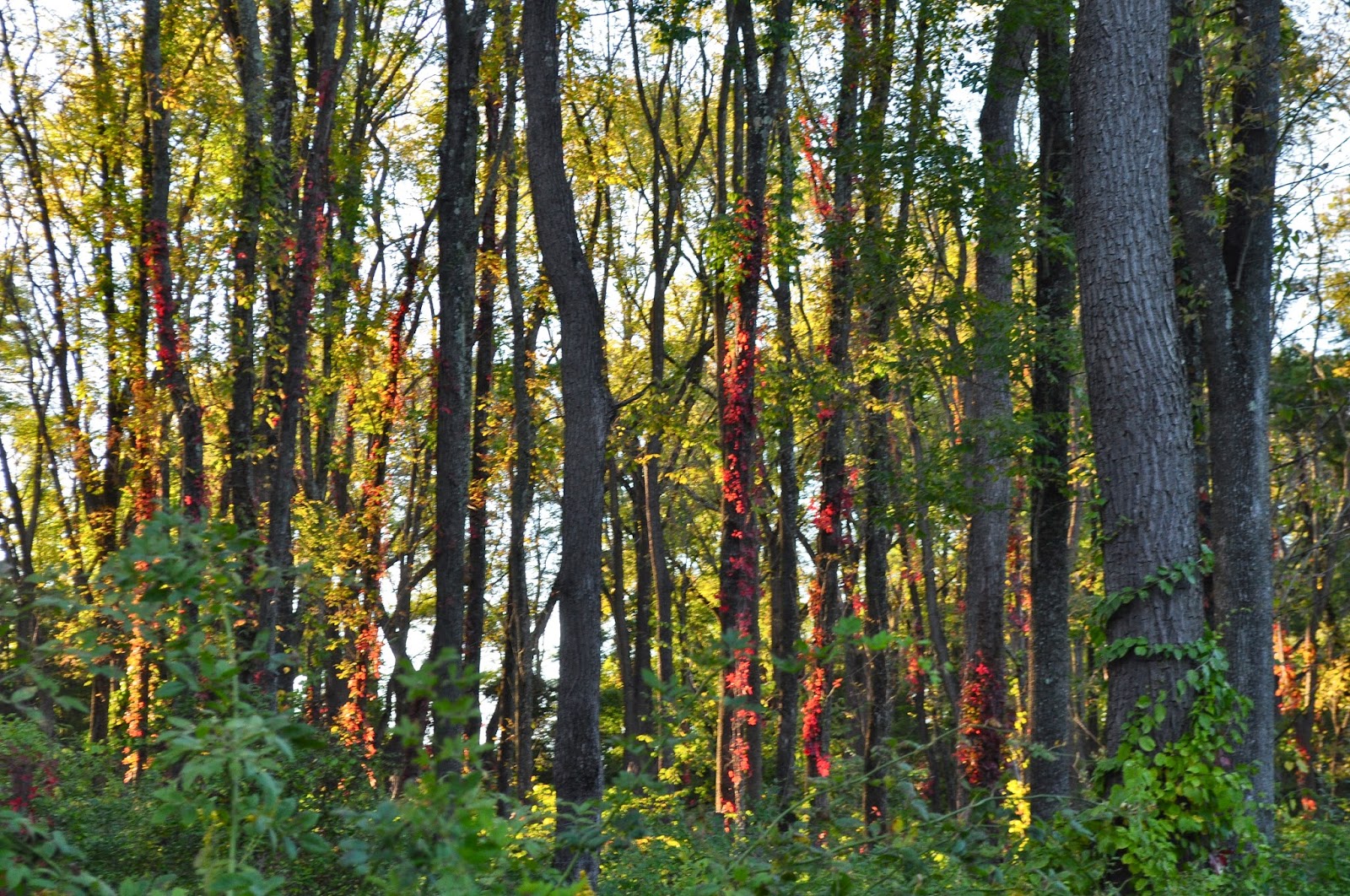 They are supposed to hit peak autumn color around the third week of October hereabouts. 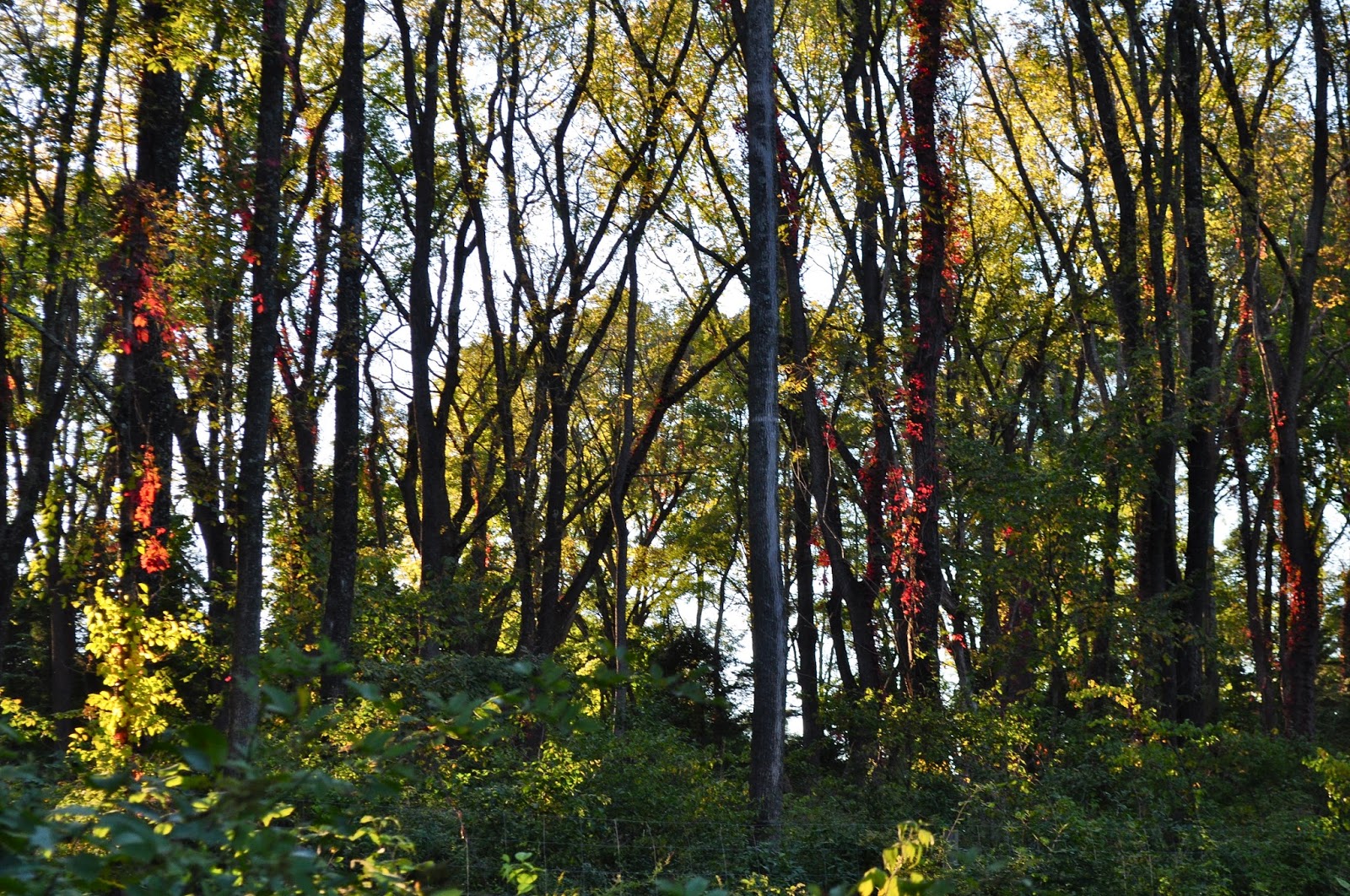 Instead the leaves are falling off even earlier than they did last year, and those that remain look terrible. 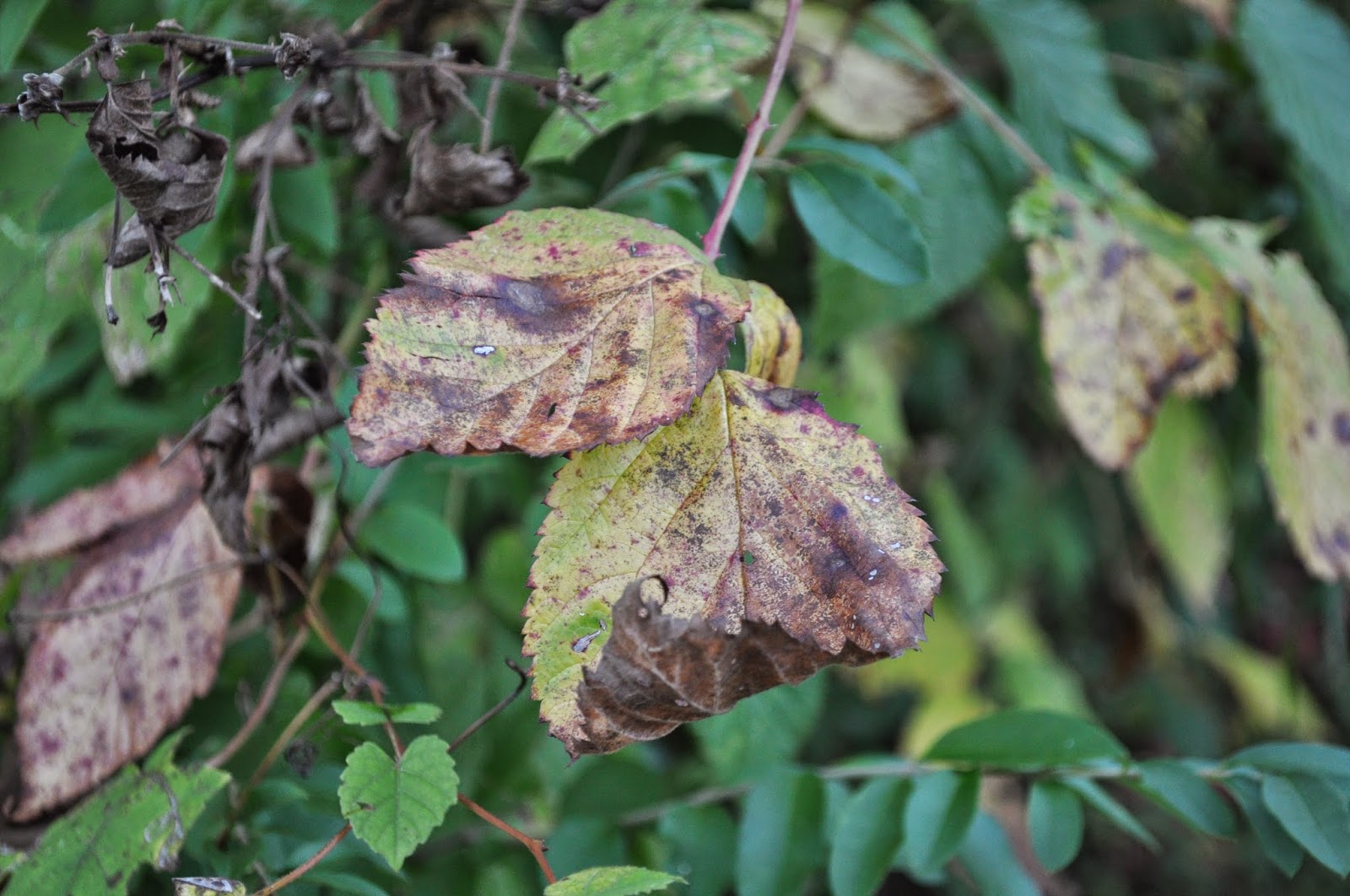 The Virginia creeper lit by the setting sun into a bright scarlet from a distance actually looks dreadful close up. 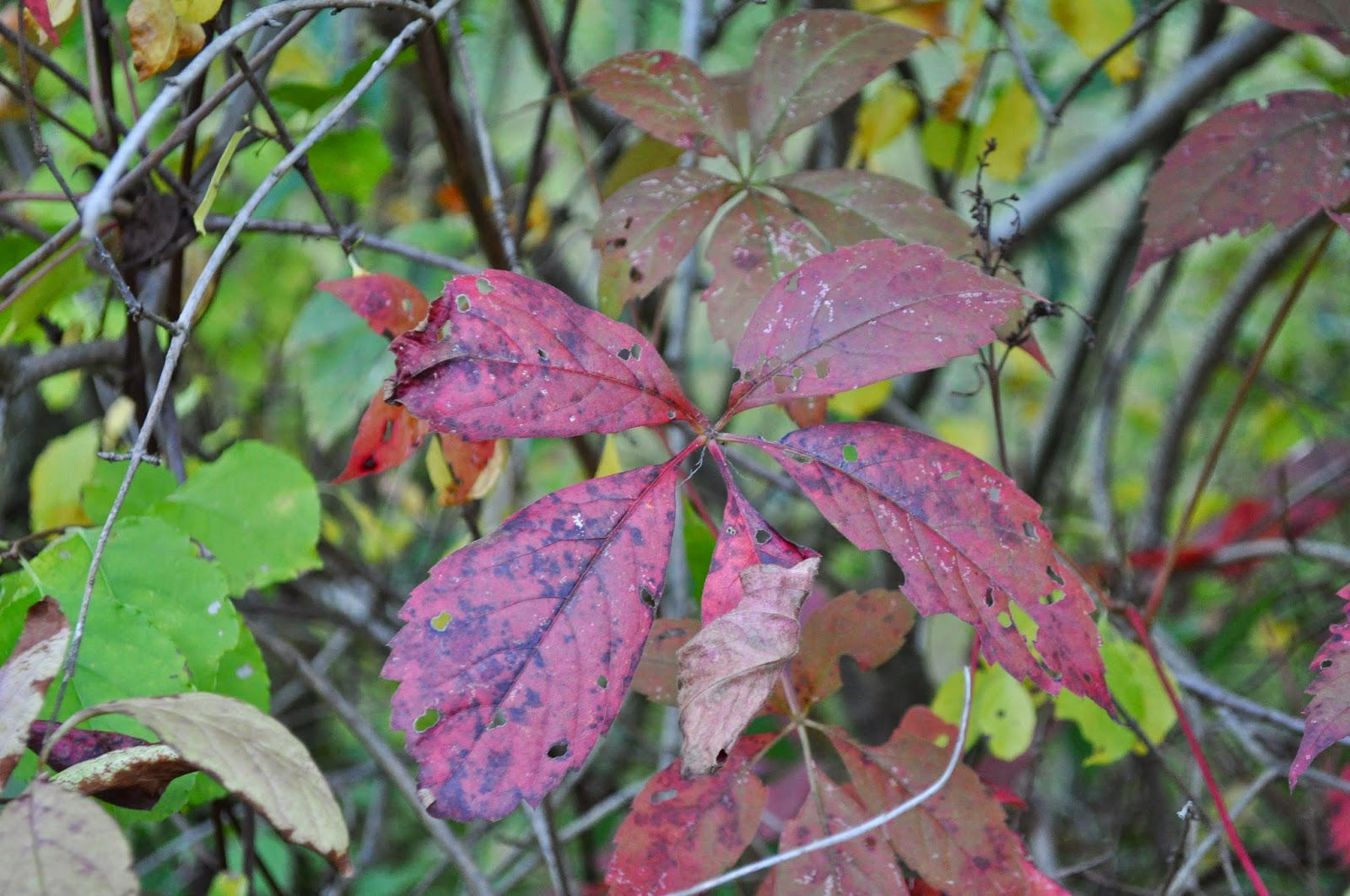 The world is dying all around us, and most people still think there is time, if they think at all. 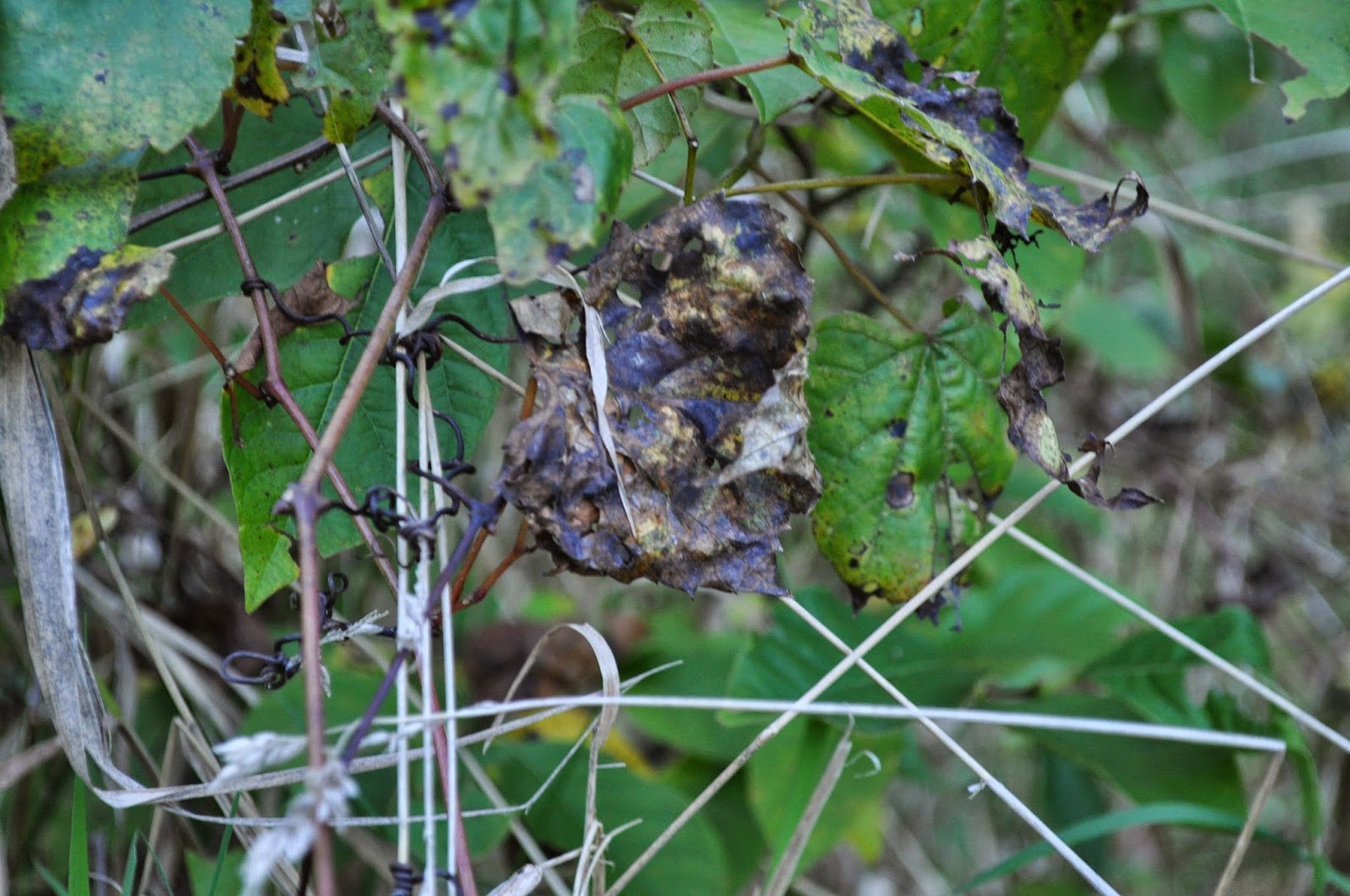