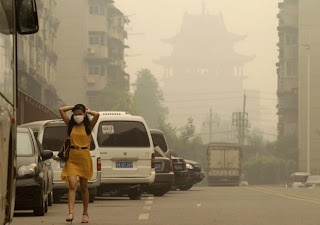 A "mysterious" sudden haze has descended in China, frightening the nine million residents of the city of Wuhan and prompting them to hastily don masks.  The fabrication that choking, poisonous pollution is somehow of mysterious origin is matched in mendacious hilarity only by the title to the accompanying video embedded below, "Unexpected Smog in Pristine National Parks" - since the ozone is neither unexpected...it's been there, and increasing, for decades, plus, it's been at least that long since the parks were pristine.  Or anywhere else, for that matter. 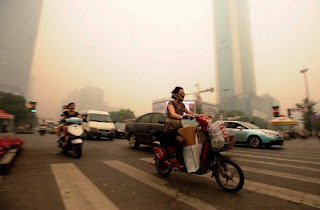 The article also states that a study released yesterday reveals that China's CO2 emissions may be 20% higher than previously believed.  If so, then their emissions of ozone precursors are almost certainly also significantly worse. 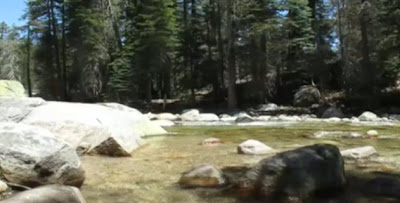 In case you miss this scene in the video, many of the branches on the trees still standing along the riverbank are bare of needles.