My "treetise", which has been accepted for publication in the new magazine from the Coming Crisis website that will debut next month, can be downloaded today(!) from DropBox as a pdf.  The subtitle is:  A Global Glut of Invisible Trace Gases is Destroying Life on Earth.  [Update:  for people who are having trouble downloading the pdf or just want a paperback copy, it is available now too(!) and can be ordered by clicking here.  NO guarantees as to quality of printing, I have only seen an online proof.  But it looks okay.] 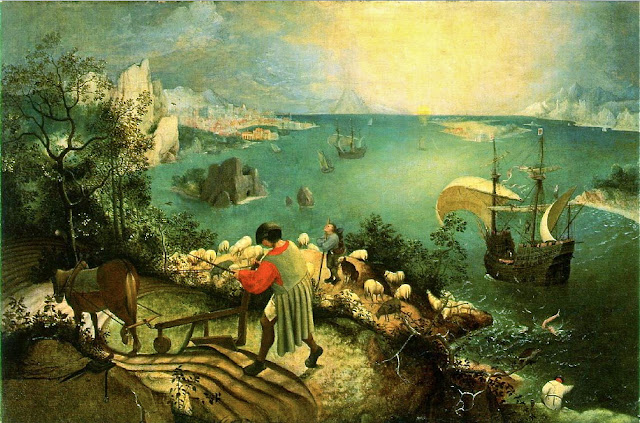 The painting on the cover is Bruegel's "Fall of Icarus".  It seems like such a simple depiction of the myth, and I was surprised to learn that its most minor attribute is infused with fulsome meaning.  In Peasant Imagery and Bruegel's “Fall of Icarus” (link) Robert Baldwin elucidates a richly textured and erudite analysis.  The entire essay is a delight to read - following are some excerpts that I particularly liked (no quote marks - everything that follows is from Baldwin's work)

Bruegel's paintings of the Seasons and his Fall of Icarus celebrate peasant life for an industrious harmony with nature. This view of peasants is particularly clear in the Icarus where the sweeping panorama is anchored around the heroic figure of the plowman.

To date, no scholar has explored the Good Plowman theme and its importance in sixteenth-century Northern art. To do so will allow a more balanced understanding of Bruegel's peasants and a richer sense of the Icarus as a mythological image phrased in vernacular terms.

The husbandman was a familiar paragon of industry, moderation, and moral integrity...

Virgil's account offers intriguing parallels to Bruegel with its extensive description of the peaceful, moderate plowman ignorant of the bellicose, avaricious ambitions of
city dwellers seeking “kingdoms doomed to fall”.7 Horace, Columella, and Pliny also contrasted a past, moral country life to the present immorality of cities.

Virtuous plowing found its most common expression in sixteenth-century Netherlandish art in allegories of Peace, Diligence, and Hope. The peaceful plowman, of course, developed from the prophecized beating of “swords into plowshares” and the fulfillment of this prophecy in the Prince of Peace. Interwoven with this was a classical tradition of agricultural abundance and pastoral harmony as images of peace.

If diligence, good works, and obedience were qualities associated with plowing, hope was equally important, drawing of I Cor. 9-10: “he that ploweth should plow with hope”.

Beyond peace, diligence, and hope, plowing could also be used to symbolize prudence, as in the rear of Bruegel's engraving of that virtue.

Seen from this perspective, the plowman in Bruegel's Fall of Icarus takes on a richer, sharper contrast to Icarus than has previously been noted. If Icarus' flight towards the heavens results in a fatal plunge to the earth, the plowman's earthbound labors lead him to eternal life in heaven.

As scholars have noted, the Icarus borrowed its plowman, fisherman, shepherd, and partridge from Ovid's Metamorphoses.

Lucian, whose works were well known to the Renaissance, cited Icarus twice as an example of foolish ambition and pride.  He was the only classical author to describe an Icarus “falling head first into deep waters”.  Perhaps then he was the source for Bruegel's unprecedented choice of a drowning rather than falling Icarus, his head submerged beneath the sea.

In the Oedipus, similar nautical metaphors for moderation introduce the Icarian example.

"Were it mine to shape fate at my will, I would trim my sails to gentle winds... May soft breezes, gently blowing, unvarying, carry my untroubled barque along; my life bear me on safely, running in middle course. While, in fear of the Cretan king, madly the lad sought the stars, in strange devices trusting, and strove to vanquish true birds in flight…"

From Ovid, Dio, Lucian, and Seneca, the Icarian myth became a Medieval and
Renaissance moral topos, showing the dangers of excess, political or philosophical ambition, pride, self-deception, and ignorance of natural orders in general.

…the self-deception of Icarus is remedied only by self-knowledge, by a sense of one's true limitations and proper place in the wider orders of society and nature. Moderation, in short, is inseparable from self-knowledge.

In Bruegel's painted as well as engraved Icarus, death and damnation are the price for ambition and self-deception.

Presumably this is why he abandoned iconographic tradition by painting Icarus drowning rather than falling. If the print used a cross to imply deliverance from the whale, the painting chose another familiar metaphor of salvation, the harbor-bound ship, also seen in Bruegel's Hope.

Bruegel's ship, for example, sails past the watery grave of Icarus, its sailors as absorbed in their mission of reaching the harbor as is the plowman in his earthly work. While serving as a metaphor for salvation and Senecan moderation, the boat presents a simpler visual contrast to Icarus. For sailors utilize air and water in a sensible manner to get on with the business of life.

Icarus' unnatural flying, already remarked by Ovid and Dio Chrysostom, is followed by an equally unnatural and iconographically unusual thrashing in the water where he proves no better as a fish. Bruegel developed further watery contrasts with Icarus through the nearby fisherman who also makes good use of the sea.

With respect to the element of air, Icarus' head was submerged beneath the waves, shut off from the breath of life.

More importantly, Bruegel juxtaposed Icarus' falling feathers with the ship's wind-filled sails.  This prudent use of air was strengthened by the sail trimming needed as the ship nears the dangerous rocky shore. This contrast between unnatural and natural air technology, feathers, and sails, acquired greater irony in the context of Pliny's statement that Icarus invented sails and sailing.

If various activities relating to earth, air, and water were stressed visually in Bruegel's Icarus, the importance of fire emerged in the iconographically unusual setting sun.

"…the hot sun in Bruegel's Icarus brings fertile crops and life to the farmer, but death to Icarus. The introduction of a setting sun may also suggest the timeless cycles of a golden age and a natural order indifferent to folly. See thus, the whole picture emerges as a cosmological panorama which goes on with its elemental rhythms, its husbandry and commerce, its life and death, its labor and folly, until the final day when those who have “plowed diligently” enter the harbor of God's kingdom.

In the Praise of Folly, Folly celebrated Phythagoras who “came to the conclusion that no creature is more miserable than man; for all the others are satisfied with their natural limitations, but man alone strives to go beyond the bounds proper to his station”.  In the early days of history, before folly reigned, mankind had too much piety to search out, with a profane curiosity, the secrets of nature; to investigate the dimensions, motions, and influences of the stars, or the hidden causes of things; deeming it a sacrilege for mortal man to try to know more than is proper to his station. This madness of inquiring what may lie beyond the sky never entered their heads.

We have seen this Icarian violation of nature's laws Ovid where wings were a rash attempt to “change man's very nature”. Perhaps inspired by this phrase, Bruegel combined his own landscape talents and humanistic interests to develop an unprecedented cosmological Icarus, an Icarus exploring the nature of human nature.