Yikes!  Somehow yesterday, I got caught up in the passion of the moment at Occupy Wall Street, and volunteered - for what, I wasn't exactly sure.  A small merry band followed our recruiter from Liberty Plaza, and gathered in an empty office suite where about a dozen organizers were waiting with plans for the direct action.  They were prepared with everything from low-tech torn cardboard and markers, to hightech a/v equipment for documentation and interviews, plus electronic gadgets for on-the-go communication.  While a large contingent marched from Zuccotti to gather in front of the Federal building, the six of us who had agreed to participate in civil disobedience spent some time getting to know each other, while we reviewed the strategy, what to expect, and the inevitable legal consequences. 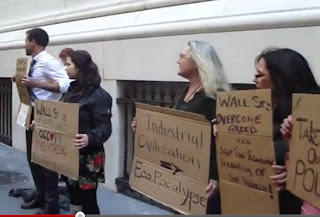 We entrusted all loose possessions other than identification to the jail support group.  Next, we each made our individual signs with whatever message we personally wished to convey, to be later repeated in a mike check during the action.  Of course, mine said "Industrial Civilization = Eco-pocalypse". When the word came to mobilize, a little cat and mouse up and down subway stairs ensued, as we wended our surreptitious way, trying to conceal our folded signs inconspicuously, through passageways beneath the distant thunderings of drums at the rally.  Abruptly we emerged in position, directly opposite the Stock Exchange.  Do I look nervous? Oh indeed, I was! But so was everybody else.  Oddly, we were four suburban women around my age - I called us the Matron Brigade - and two more experienced 20-somethings.


I never could quite make it out before, but that reverberating roar from the crowd is the chant "Ah! Anti! Anti-Capitalista!" - but then, I still come across written lyrics from rock'n'roll songs I thought I had memorized fom the 1960's and I'll think:  "OH! Is THAT what they were saying?"  This U-stream from an Android phone might sieze up now and then, but it gives a gritty sense of what it's like to be in the midst of a vibrant, exhilarating , raucous protest.

Video streaming by UstreamIt made for a very strange vantage, to be lying down on concrete in the city, staring straight up at a blue sky with only the top of the Stock Exchange roofline visible above the ragged edge of my sign. 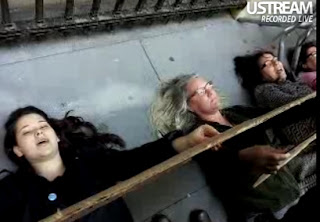 Also peculiar was to have photographers literally climbing all over us to get pictures from above...and then after they were shooed away, to be surrounded by a sea of police. 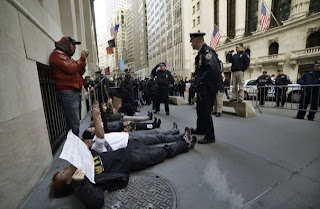 That's us, going into our paddy wagon!


Every member of the entire force we encountered was extremely courteous, which I appreciated, but doesn't quite make up for the fact that we were detained for nothing other than peacefully exercising our Constitutional rights.  Losing circulation from handcuffs became old pretty fast, and spending six hours behind bars was a bit much - although we were all together, so we made the most of it with story-telling, singing, and laughter.  When we were finally released later that night, a surprisingly large loyal group of occupiers had waited all those hours outside in the cold and dark to greet each of us as we were released, with cheers, hugs, vegetarian dumplings, and whiskey if so desired.  I had to skip all that to get across town and catch the last train home.

There are many other events happening around New York and the country as an exciting prelude to the May Day strike. Every single officer we spoke to asked us about it.  I got the definite impression that the city and the banks are taking this very seriously and are anxious, perhaps not about anything wild happening on that exact day..but my guess is that they fear a large and enthusiastic turnout will signal that OWS is strong, thriving, and has no plans of going away until this "Capitalista" system is fundamentally altered to give equal justice to the 99%.  And I wager their worst misgivings are accurate.  Naturally I will be taking part in the environmental side of the activities.  Following is a release for the Environmental Color Block, from the sustainability working group plans for the event.  I haven't decided yet whether to wear green, for Reclaim the Earth - or the white, for Consciousness Shift.  We are sorely in need of both.
Eco Block Trailer from Where are all the bees? on Vimeo.
Posted by Gail Zawacki at 2:10 PM