With his kind permission, it's my great pleasure to post this essay written by Mr. Tim Murray: 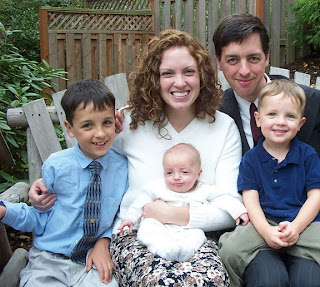 Hi there! We're the Percapitas.
We've cut per capita consumption and our per capita waste. We compost, we conserve, we re-use and we recycle. And we're going to teach our three carbon footprints----Mark, David and Robert---to do the same.
Yes, we know that each of us will require more than 38,000 pounds of mined resources each and every year to maintain our cosmetically green American lifestyle, or 2.96 million pounds in our average lifetime of 77.9 years. That's 8,509 lbs. of stone, 5,599 lbs. of sand and gravel, 496 lbs. of cement, 357 lbs. of iron ore, 421 lbs. of salt, 217 lbs. of phosphate rock, 164 lbs. of clay, 65 lbs. of aluminum, 12 lbs. of copper, 11 lbs. of lead, 6 lbs. of zinc, 36 lbs. of soda ash, 5 lbs. of manganese, 332 lbs. of other non-metals for making glass, chemicals, soaps, paper, computers and cell phones, 24 lbs. of other metals for the same uses plus electronics, TV and video equipment and more-----not to mention 951 gallons of petroleum, 6,792 lbs. of coal, 80,905 cubic feet of natural gas and 1/4 lb. of uranium to generate the energy each of us uses in one year.
And we also know that our typical suburban house-----the one with the Prius in the driveway----was constructed with a million pounds of minerals and metals as were 130 million other homes across the country. Ours needed insulation (using silica, feldspar, and trona), roofing (silica sands, limestone and petroleum) and hardware (iron, zinc, copper, steel, brass), as well as windows made from trona, silica sand, limestone and feldspar, and concrete foundations made from sand, gravel and cement, which in turn is made of limestone, bauxite, clay, shale and gypsum and is reinforced by steel rods. And we expect that another 70 million such homes will need to be built by mid-century to accommodate the next 150 million additional people who will make America their home, making us even more vibrant, diverse and strong than we already are now.  People are our greatest resource----and besides,  our local Sierra Club branch assures us that we can "de-couple" population and economic growth from environmental degradation! We can't wait until they de-couple ice cream consumption from caloric gain and thirst from the desire for fluid.
Now, some doomsayers like analyst Chris Clugston have warned us that 69 metals and minerals vital to our industrial economy have peaked and will soon not be affordably accessible. But we both majored in classic economics at Northwestern and so we know that substitutes will be always be found if the price is right. You can never discount human ingenuity and there is a technological fix for everything. We can have 'green growth'. What we can't have though, is pessimism. We need hope to get us through the night.  Cassandras need not apply!
OK, it's true. We could have done better. By not having three kids we could have saved the atmosphere from an extra 28,223 metric tons of C02 each year---or 58 times the amount that we have saved by switching to a fuel efficient car, driving less, recycling, installing CFLs, replacing our inefficient refrigerator and old windows.  And by adopting rather than conceiving, we would not have added to the 350,000 children who are born every day to a planet now burdened with 7 billion humans, and braced for more.  But we thought that it was vitally necessary that the world have our genes and that our children have the same pair of eyes or ears that we have. And besides, if educated, responsible and morally superior people like us don't have children, then "they" will overwhelm us. So let the breeding war begin!
Oh, and by the way, our procreative choices are NOYB. Pushing other people and other species off the plate is our sacred personal right.
We're the Percapitas. We're green, we're progressive, we read Utne and Mother Jones, we listen to NPR, vote liberal Democrat and we are oh so much more aware and responsible than you are!
(Does anybody have a cream pie handy?)
Tim Murray
July 19/2011
Posted by Gail Zawacki at 9:43 AM