Dude, Who Stole the Trees?

Over the last couple of stifling, suffocating days, two of my chickens keeled over and died.  It was really creepy to dredge the first out of the coop, grabbing her by her feet, stiff with rigor mortis - and the other had been pecked into smitherines by the time I saw it, out in the pen...ugh!  Sympathetic neighbors who are better farmers than I told me poultry is overly domesticated and have weak hearts that cannot stand the exertion of extreme heat. 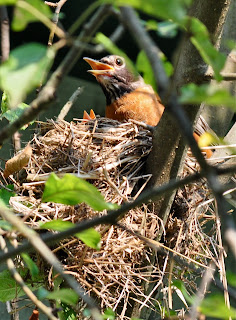 These robins made a nest in the meager shade of a nearly leafless apple tree on my patio, and have been frantically trying to raise just one little baby in it - no doubt because the first spring brood was lost. 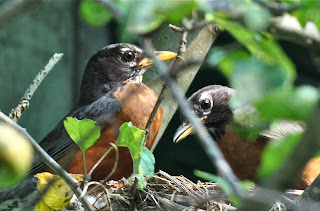 Even conspiring together the parents could not find enough to feed their ravenous hatchling.  I went out on the porch yesterday to check on the family, and they were all gone - not in the nest, not in the cherry tree nearby from where they monitored my trespassing...the only trace (and I'm not making this up to be poetic, it's true) was a tiny white fluffy feather, which I watched in fascinated astonishment and horror as it drifted slowly through the thick air from the nest, wafting from side to side until it settled in silent reproach on the ground at my feet. 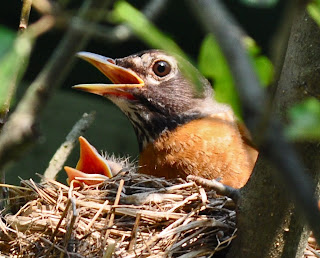 I have also been watching these fawns for the past several days.  There is no sign of a mother.  I read that when the mothers cannot find enough food for themselves to produce milk, they abandon their babies. 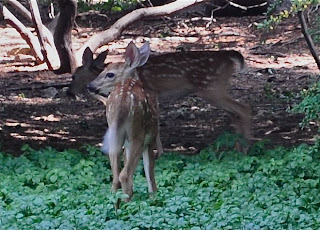 By surprise I came across something I wrote in December of 2009 that I had since forgotten - Dude, Who Stole the Trees - as a yahoo contribution.  Nothing has changed in my assessment since then, except that the timeline has shortened, and by the same token, incredibly, the ludicrous and stupid denial of the Ignorers has expanded and compounded.  It's making me quite weary of repeating the same warnings, that we should prepare for hellacious consequences, and the best we could do is recognize that - and commence a radical program of conservation of all fuel and resources.  There is so much I could say and link to going on in this crazy dénouement - but why?  It's merely repetitive and boring and useless!

Here's a brief, almost silent film clip of the sort of extraordinary extreme weather displacements that have commenced, and will intensify, with no end in sight (you know, just for fun...because, why not?  Unspeakably powerful winds make waterfall flow upward!)