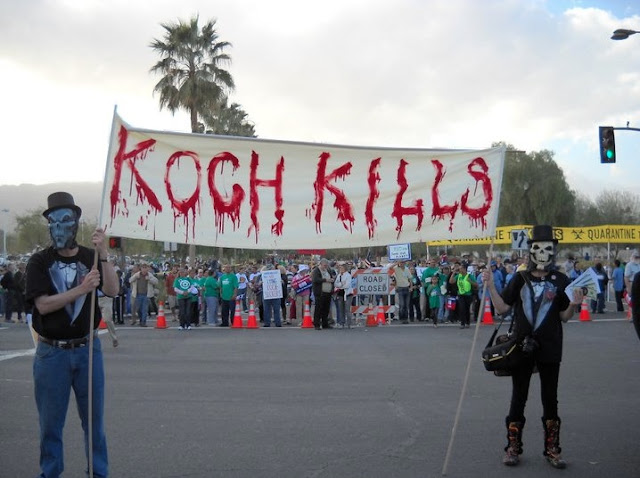 I found another picture of us from Sunday's protest, on the web here.  If this isn't enough to warrant being tracked by the Kochtopus, I'll be very disappointed!

from alternet
We talked over the weekend about the David and Charles Koch's latest meeting, held at a posh resort near Palm Springs, where the billionaire conservatives gathered with powerful far-right officials to raise money and plot strategy. If you didn't hear much about it, that's not an accident -- the discussions are held behind well-protected closed doors, and journalists are strictly prohibited from attending sessions.
Kenneth Vogel reported today on the Koch Bros' larger media strategy. It apparently involves an aggressive public-relations effort, reaching out to reporters to "shape their Koch coverage," while using a "private security detail" to play "hard ball with critics and suspected foes."
In particular, Vogel noted the events in California over the weekend, with Koch-paid guards tracking resort guests deemed "suspicious," and erecting a blockade to prevent cameras from filming arriving guests.

Inside the resort at the beginning of the conference, "there was an atmosphere almost of paranoia," said Gary Ferdman, a Common Cause official.
Ferdman had reservations at the resort and stayed there Thursday and Friday night. He said he was told Saturday that his lunch reservations at the resort restaurant had been canceled and was urged to check out and leave promptly by a member of Koch's large security detail.
Security manned every doorway and stairwell near the ballrooms where Koch events were held, and threatened to jail this POLITICO reporter while he waited in line at the resort's cafe, after he stopped by a Koch conference registration table.
The resort grounds were "closed for a private function," the resort's head of security, James Foster told POLITICO, ushering the reporter outside, whereprivate security guards, wearing gold lapel pins bearing Koch's "K" logo, threatened "a citizen's arrest" and a "night in the Riverside County jail" if the reporter continued asking questions and taking photographs.

The Kochs already have a reputation for being overly-secretive and heavy-handed in their tactics. I don't imagine threatening a journalist while he waited in line at a hotel cafe is going to help.
As Jon Chait joked, "If those hired goons don't dispel the image of the Kochs as sinister moguls, I don't know what will."
By Steve Benen | Sourced from Washington Monthly
Posted by Gail Zawacki at 3:13 PM