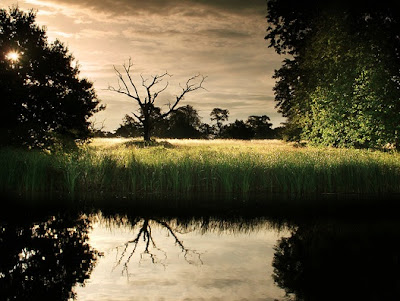 There has been much hope expressed that Obama's EPA will perform as the last resort to rein in catastrophic levels of greenhouse emissions, since legislation and international treaties have been the most abysmal of failures. 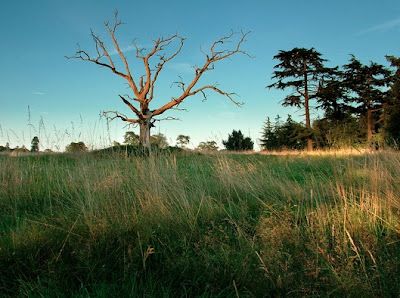 Leaving aside the inevitable delays to implementing stricter EPA regulation from industry lawsuits - and the fact that the regulations will certainly not be strong enough to save our sorry asses anyway - the miserable tale of the EPA's cave-in to industry over the pesticide that is killing bees has to make me wonder if there is anyone in that agency with a shred of integrity. 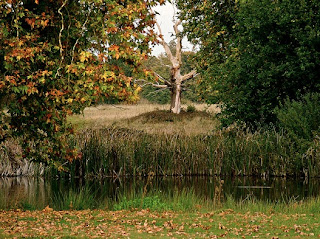 The latest round of wikileaks demonstrates in shoddy detail how the EPA chose to ignore science in order to allow Bayer to market and sell a pesticide that has been banned in other countries because it kills bees...which just happen to be essential to pollinate many crops!  Hey, it's only our food at stake!  Why should that be more important than industrial agriculture?  Grist has the shameful details here. 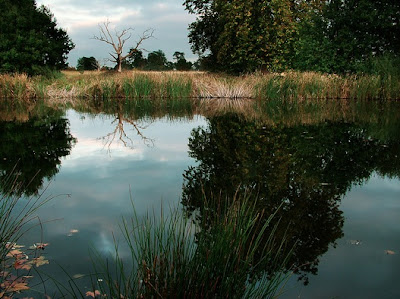 
"Wikileaks continues to rock the political world by shedding light on conspiracies, corruption and cover-ups. The latest batch of diplomatic cables released by Wikileaks reveals what can only be characterized as a U.S.-led conspiracy to force GMOs onto European countries by making those countries pay a steep price if they resist." 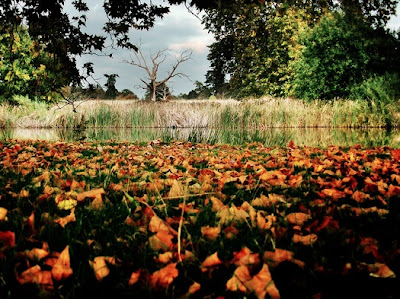 Here's another version of the story, from Rodale.  GMO seeds, of course, mean Monsanto.  So from reading about the bees and pesticide use in agriculture eventually I wound up watching the following movie, which is about Monsanto, and, oh, global domination.  A feature length French documentary that gets off to a slow start (and the voice recognition software translation has similarly ludicrous inflections to this parody of first daughter's indoor riding ring construction project!) but really, it's a gripping saga - everyone should be aware of the incredible lies, manipulations, and government complicity in what amounts to just about the greatest fraud imaginable.  So here it is, for when you have time to watch - meanwhile there remains much to say about trees dying from ozone, the purpose of this blog, continued below...
I've been snowed in (duh!) and it's been very cold with vicious winds, so instead of taking pictures outside I have been huddled indoors, noodling around on the intertubes in search of images of dead trees.  There are lots!  Who knew that pictures of dead trees could be so beautiful!?  This first one is from Ohio. 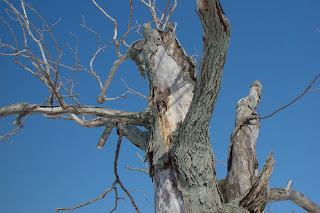 Here is one from California.
Ultimately I came across a flickr photstream by Kevin Day, a prolific (3,500 uploads!) and immensely talented photographer who has taken many pictures at Langley Park, a venerable estate located in southern England.  He has, I assume inadvertently, recorded the decline of the magnificent trees there, like this giant in front of the house. 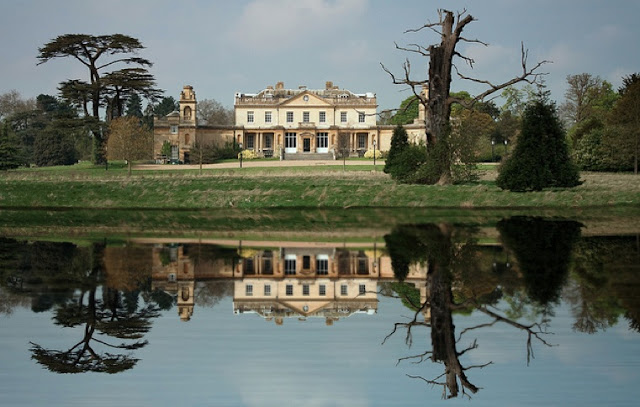 There is an incredible range of different light, weather, and times of day. 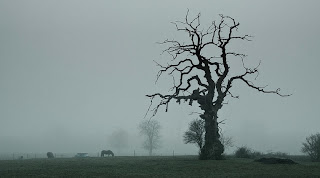 In this snowscape the center pines are already bare of needles, and the taller specimen on the right is thin. 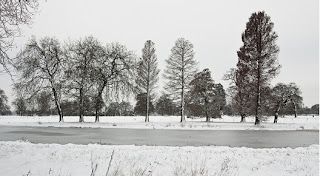 All of the pictures that follow were taken by Kevin Day, and will be interspersed with news of interest. 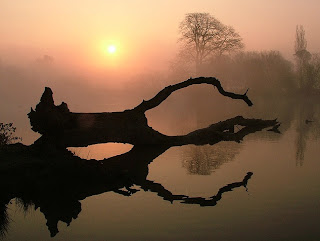 Regular readers of this blog know that the Basic Premise page at the top of the blog has a long list of research indicating that virtually all species of trees are dying, and that toxic ozone is the underlying cause.  Well, we can now add orange trees to the list - they are dying in Florida, and it is being blamed on an incurable insect-borne bacterial disease, predicted to wipe out the citrus industry in 7 to 8 years...unless genetic engineering can save it! 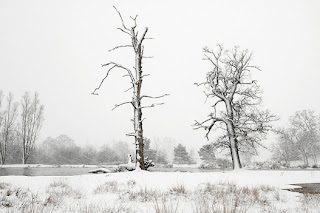 Catman linked in comments to an update on the dying pecan trees in Texas (with a video version), which is being blamed on nearby coal plants - and notes that this time, it's been reported that other species in a greater range have been dying as well:


"'I have noticed for over 20 years how the Coleto Creek power plant's sulfur dioxide has been damaging hundreds of the trees on our property — live oaks, white oaks and pecans,' Faupel wrote. 'Most of the white oak trees are already dead. The surviving trees don't have as much foliage and they're becoming more diseased, I believe, from the plant's sulfur dioxide weakening the trees over time.'" 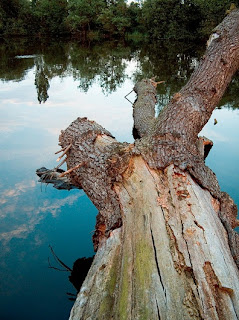 Given that the entire state of Texas is full of power plants and dying trees, I can't understand why it is such a mystery - an enigma, no less, according to the article - that children in Puerto Rico have the highest rates of asthma in the world!   Did they not get the memo from the EPA that ozone causes asthma? 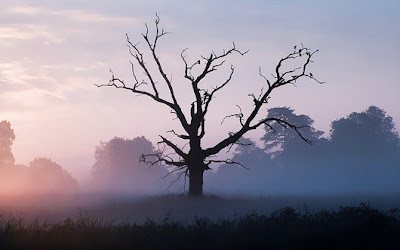 Kevin Day has taken many shots of the same particular dead tree, which he refers to as "old friend" from different vantages... at the top of this post there are five, and what follows is a series of them, each lovelier than the next. 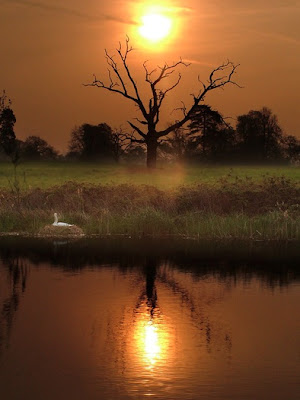 Further research demonstrating that ozone travels great distances is to be found on this NOAA page, evidence which should put to rest the notion that impacts are restricted to urban locations, as if any more were needed. 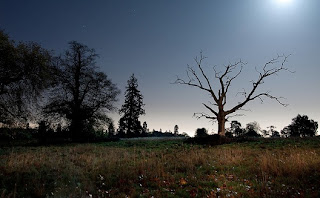 "At the fall AMS Mountain Meteorology Conference, Andy Langford and Bob Banta (CSD) discussed results from airborne lidar measurements of ozone made above the Los Angeles Basin in 2009. Their results—also published in Geophysical Research Letters with Christoph Senff, Raul Alvarez, and Michael Hardesty of CSD—indicate that the mountains push polluted air up into the free troposphere, where it can travel as far as western Colorado." 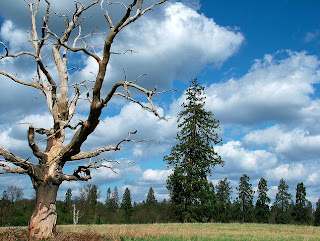 Here's another intriguing report about the role of nitrogen:

"Nitrogen is an essential nutrient for plants; limits on available nitrogen constrain how much plants can grow. This in turn affects the amount of carbon dioxide plants can absorb, which affects the global climate." 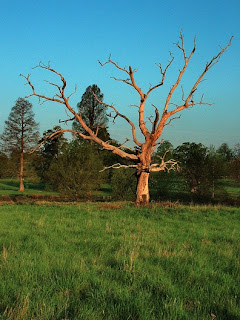 "Using a framework that considers interactions of carbon and nutrients, Wang and Houlton have developed a new global estimate of nitrogen fixation rates." 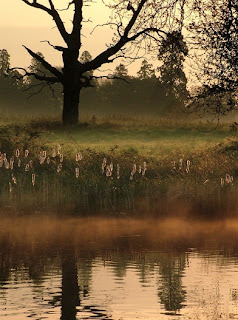 "The authors considered the amount of nitrogen plants require to store additional carbon and found that a substantial deficit of nitrogen exists for plants in most areas of the world." 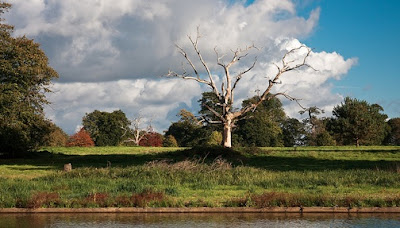 "They argue that most climate models that do not take into account nitrogen have overestimated carbon uptake and therefore underestimated predicted global warming." 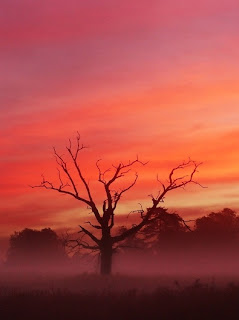 "The authors suggest that it is important that the next Intergovernmental Panel on Climate Change consider interactions between the nitrogen and carbon cycles." 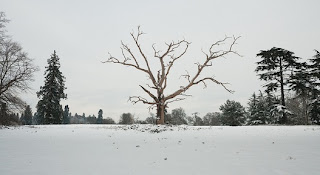 According to this article in Science Daily, the nitrogen cycle that has been so dangerously disrupted on land is replicated in the oceans as they acidify.   Who knew? 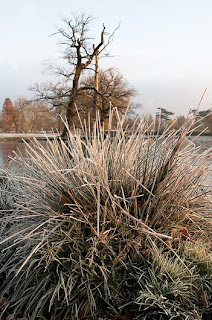 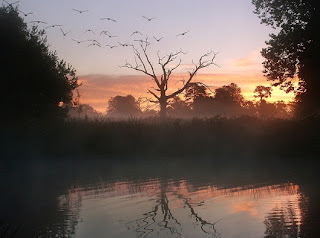 "This report that ocean acidification decreases nitrification (the amount of nitrogen) is extremely important," says Garrison, "because of the crucial role of the nitrogen cycle in biogeochemical processes-processes that take place throughout the oceans." 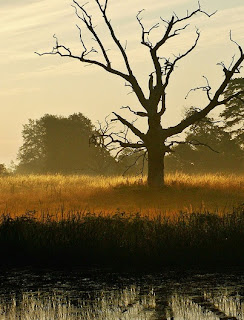 I loved the title of this editorial in the Guardian UK, Why biodiversity loss and climate change are equal threats.


"Without protecting and enhancing biodiversity in forests and other systems we are losing our biggest ally. These living systems can lock away carbon at a fraction of the price that technical solutions for carbon storage could only do at huge cost and by expending even more energy." 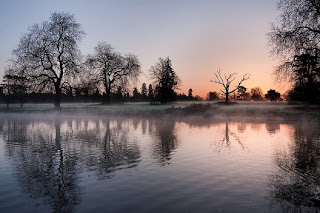 That seems sensible, and I couldn't agree more with this:

"For the most part, people have seen biodiversity as being about saving endangered species, or setting aside special natural habitats as national parks. However the truth is that biodiversity is an issue of mainstream economic importance, with consequences that are wide-ranging; from helping mitigate floods and droughts to providing a pharmacopeia of future medicines. It is as much about how we as consumers make informed choices about the products we purchase as it is about preserving exotic animals in far away places." 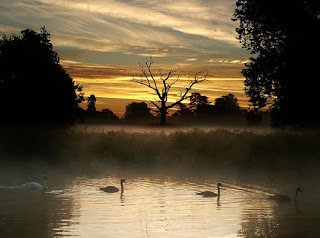 But in light of our rapidly collapsing ecosystem - particularly plants, the base of the food chain - I'm afraid the conclusion seems a trifle inadequate:

"The first target from Nagoya is the call for all people to understand the importance of biodiversity by 2020. Such an endeavour is no simple turning over of a new leaf, no easy New Year's resolution. The topic needs to be covered in our education curriculum at all levels. It will require the vision from responsible government and business to ensure this issue is placed at the heart of aspirations for a successful, emergent green economy. It will require a sea change of awareness among the majority of media editors and producers that this is not only of relevance to their audiences, but that it is a central news story that will run and run for the decade to come." 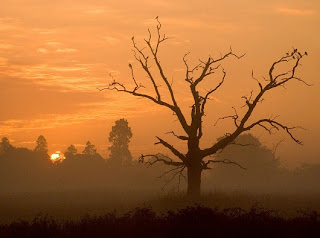 Last, here's a quick youtube posted by some Brits who are dismayed by the damaged leaves of horsechestnut trees.