Chris Hedges Takes a Swipe at the NDAA

I was already planning to go yesterday morning to the Federal Appeals Court in support of the lawsuit against the NDAA - and then, even better, I received an invitation to the panel discussion later on.  That made for a very long day and I was exhausted by the time I caught the 9:45 train home. 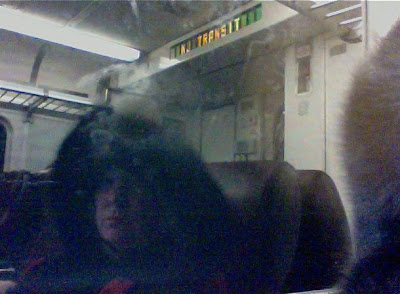 The National Defense Authorization Act has two provisions that are an example of many ruses employed by our corporate overlords to systematically strip citizens of legal rights and protections...and to frighten them into silence.  From a slew of sinister actions besides such unconstitutional rulings - including drones and suveillance, weapons and ammunition stockpiling, and the militarization of every facet of local law enforcement - it should be pretty clear to anyone who isn't comatose that the highest levels of government are preparing for civil breakdown.  Enough experts have spoken up by now to make it obvious that the government anticipates that at some point the converging catastrophes will become so overwhelming that even the elaborate bread and circus that is broadcast constantly into what passes for American brains won't be sufficient to divert the newly enlightened, terrified and infuriated former consumers.
You'll see in the video (forgive the celebrity moment of clarity with Lee Camp!) that Chris Hedges refers to Moby Dick, which is an amazingly prescient tale considering our current heedless sailing into fanatical oblivion.  If you missed an earlier post The Final Puff, it includes a more modern twist in an essay called "Mobe Duck" that is fascinating.  I got so interested in the horrific excesses of the whaling industry, which are eerily mirrored in our current obsessive exploitation of petroleum, that I ferried to Nantucket last fall to see where it began in earnest.  There are pictures from the museum, the lovely shops and cobbled streets, and tragically dying trees at Torches of Freedom.