I left the evermore dun and drab landscape around Wit's End for the "biggest climate change rally ever" in Washington DC, carpooling to today's event with my friends Roger and Susan.  Of course on the way we passed by countless sights like this, dismal scenes of trees in varying states of decay. 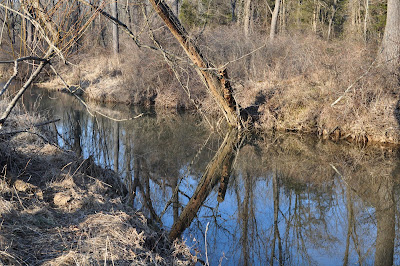 But we went for a purpose, so I won't dwell on that now.  Here we are, marching from the Washington Monument to the White House, in a photo courtesy of our kind host who has let us couchsurf at his Georgetown condo - thanks for a cozy place to stay, and the pictures, Shaw Thacher! 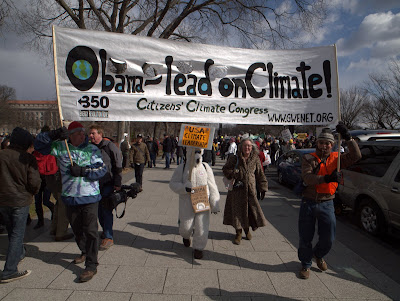 The irrepressibly exuberant Occupier contigent added some raucous and joyous rambunctious anarchy to the otherwise staid restraint that prevailed. 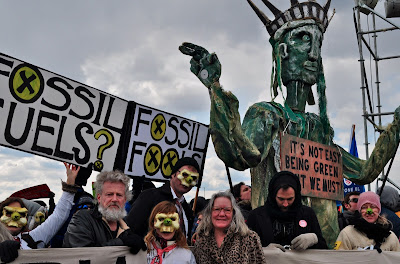 At 30,000 or more, perhaps a real unified movement has finally been born.  People came from all over the US and Canada carrying signs protesting mountaintop removal, tarsands, and fracking... plus plenty of broader environmental, anti-ecocide sentiments were expressed. 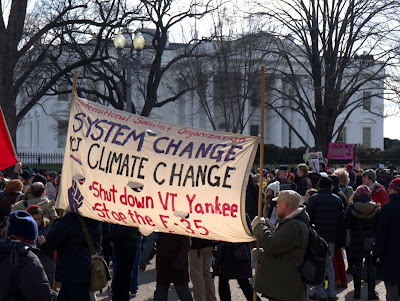 It's interesting that the passion fueling the historic increase in turnout results from disparate localized actions coming together with a common interest.  The initial and prevailing instigation for many of them was a concern for clean water and air being ruined from the pollution deriving from extractive industries - and only tangentially climate destabilization from CO2 emissions.  Of course, they are inextricably entwined.  Lets hope the leaders of the major sponsors like the Sierra Club, who are the recipients of most of the available funding, take note of that and shift an emphasis away from glamorous insider politicking and towards organizing on the ground...oh, and noting that climate change is inevitably the bastard child of industrial civilization and capitalistic corruption - a system that requires impossible endless growth and consumption. 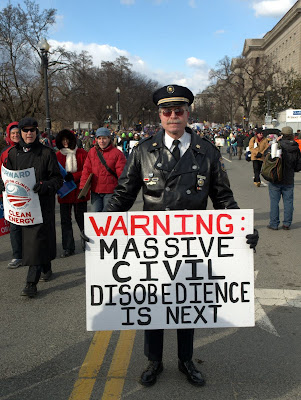 Where it goes from here is anyone's guess - as is whether it is too late to make any fundamental difference in the ultimate outcome.  I think it is somewhat ironic that 350.org isn't proposing any policies that could conceivably return atmospheric levels of CO2 to 350 ppm, the stated goal embedded in their own name - not to mention which, 350 is likely not low enough to avert catastrophe thanks to exponentially amplifying feedbacks already underway.  I won't write anything else tonight though, because my fingers are still frozen!

Update:  Grist has an article, "At Climate Rally, some signs of fraying in a movement's big tent", which is worth reading even though it is kind of upside-down since actually, the movement has never been a big tent, and so the rally was more like an unprecedented coming-together of the frays!  My comment:

Excellent, excellent and thought provoking article. Slight correction though - the earlier so-called "radical" action of civil disobedience was anything but. It was a very safe publicity stunt orchestrated with the police, which purposely and carefully, deliberately excluded anything actually disruptive (the timing and location of the action was kept secret because participation was "by invitation only"). It was designed to set a pre-emptive meme in advance about the rally, one which was controlled by the big, well-funded organizations with paid staff who sponsored it. I give them a ton of credit for that, while at the same time, I give more credit to the small, local groups that made up the impressive numbers, who turned out because they are fighting for their air, water and land which are being stolen by the ruthless corporations aided by our totally corrupted government.

Now that the Big Green NGO's have drawn the line in the sand, it will be very interesting to see what happens if Obama does approve the pipeline. Either way though, business will continue as usual, emissions will contintue to climb and condemn the young generation to a future of severe deprivation and ultimately catastrophe. The only response can be to radicalize the movement and challenge the entire capitalistic, growth-based system that perpetuates exploitation, both of poor people and the ecosystem.

Like the the sign carried on Sunday by retired Philadelphia Police Ctn. Ray Lewis says, "Warning: Massive Civil Disobedience is Next". Not, I would add, polite, pre-arranged mock civil disobedience by celebrities, and the self-designated elite "leaders" of the movement.

Let's hope this event marks the beginning of a merger between the cautious, foundation dominated Gang Green groups and the grass-roots protests inspired by Occupy to revolutionize the economic foundations of society.

Another update:  A beautiful action in Ohio...BRAVO!!!!  If you've got any spare change, they could use bail money: