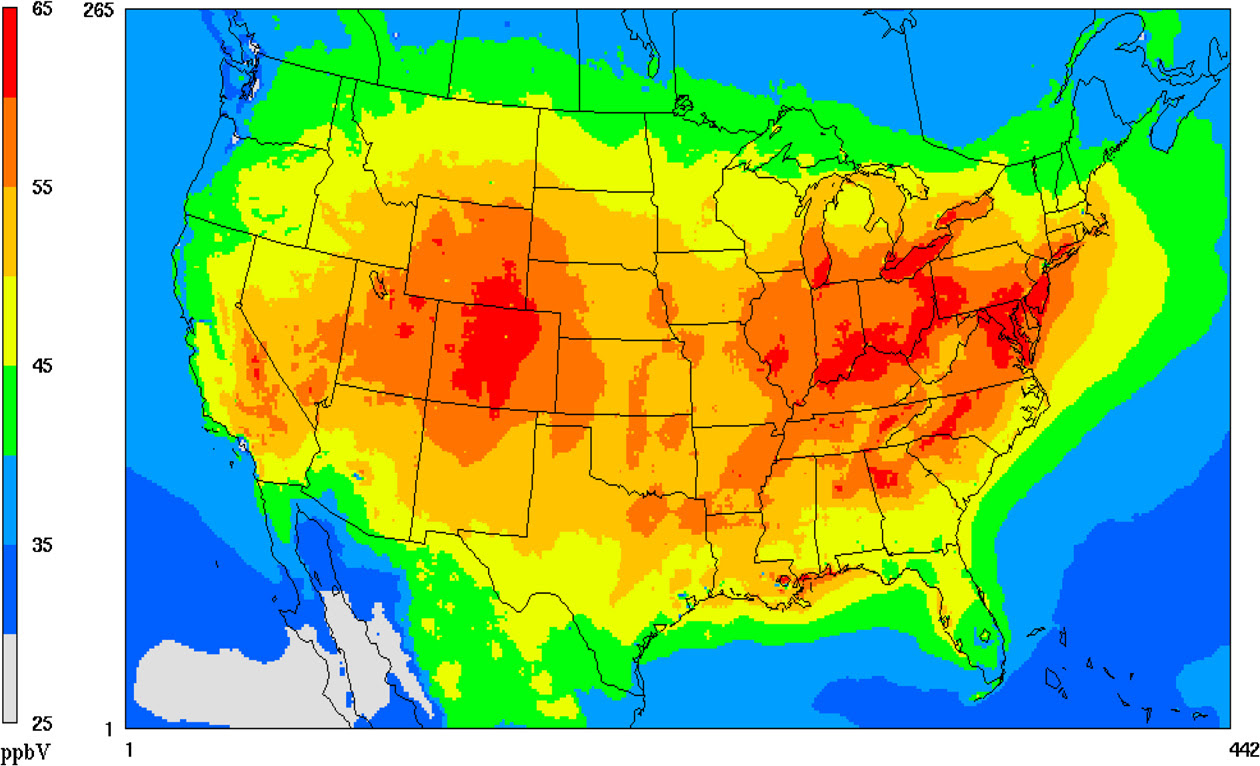 I take "damage to ecosystem function" to translate from governmentese to plain English as, roughly, "Dead Trees" and "Dead Animals that Depend on Trees." Also note this map is 5 years old, and regardless of the fluctuation in levels of pollution, the damage is cumulative so every year is worse for those species that are perennial. Furthermore, there are indications that China's pollution is winding up as far away as California.
As this article explains, dying trees are a global phenomena. (All quotes that follow are from links at eco-systems.org. There are so so many links at that site, to stories about the impacts of toxic greenhouse gases. It's like diving into hell, but go ahead, be my guest. Or just keep reading for a few choice entries):
From Bangladesh:

The epidemic of dying trees which has struck the forest resources of the world appears to be quite mysterious. But the most convincing evidence points to air pollution, specially sulfur dioxide and oxides of nitrogen spewed in the air by the ton from electrical generating stations, industrial boilers, smelting plants and automobiles located thousands of miles away. One school of thought points out, by itself sulfur dioxide can sap the vitality of the tree;.so can oxides of nitrogen. But the real problem seems to begin when two gases work in combination in the atmosphere. Hurled into the air by tall smokestacks, the substances mix with water vapour to form sulfuric acid and nitric acid known as acid rain and in the presence of sunlight turn into oxidants such as ozone. When these new chemical mixtures fall to earth as snow or rain or float into forests as wind or fog, they can be far more lethal than the ingredients that went into them.

Acid rain, in the form of dry particles, snow and fog, attacks a tree on all fronts. Airborne pollution settles first on the highest treetops of the forest crown, which acts as a natural windbreak. Acid precipitation filters down to the soil, eats away at the root system and eventually leaches out key nutrients such as calcium and potassium and mobilises toxic metals like aluminum. Once on a leaf or needle, acid rain disrupts the operation of the stomata, the tiny openings that permit a tree to "breathe." The process of photosynthesis is thrown off balance, and subtle changes take place in the internal chemistry of the tree that result in discolouration and premature aging. Finally acid rain washes away vital nutrients from the leaves and needles so that the tree slowly starves to death, its respiratory, circulatory and digestive systems being crippled. Much like an AIDS victim whose immune system has broken down, the ailing tree is defenceless against the ravages of nature.

From Bangladesh to Appalachia:

from the flyleaf of
AN APPALACHIAN TRAGEDY
AIR POLLUTION AND TREE DEATH IN THE EASTERN FORESTS OF NORTH AMERICA
edited by Ayers, Hager and Little
1998

All along the Appalachian chain, from Maine to Georgia, trees are dying. Spruce and fir are dead along the ridges. Great swaths of sugar maple are in mortal decline. The butternut is nearly extinct, and hemlocks are in a desperate struggle for life against an insect that flourishes as air pollution worsens. Dogwoods have been ravaged by a fungus that no one could even name until recently.

Weakened by decades of air pollution that have brought acid rain, deadly smog, and excess nitrogen, and by cell-destroying ultraviolet rays from a thinning ozone layer, the magnificent Appalachian forests are no longer able to fight off the bugs, blights, and bad weather that afflict forests everywhere. Instead, in these mountains, the trees are dying in unprecedented numbers - with death and decline affecting virtually all species in every part of the range. Yet relatively few people are aware of this ecological calamity in the making, due in large part to the efforts of the forest products industry, and their advocates in government, to downplay the crisis by manipulating statistics and confusing the issue.

An Appalachian Tragedy sets the record straight. Drawing on the talents of an authoritative and distinguished group of writers, including an award-winning historian, a top acid-rain scientist, and an eminent environmental journalist, this powerful book documents the damage that has already been done and warns of the fearful consequences for the future...
If we allow tree death and forest decline to proceed unchecked in the Appalachians, we will have a tragedy of national proportions.

During the annual forest survey in the summer of 1998, some 127,000 trees, spread over 5700 sample plots in a network covering most of Europe, were examined for defoliation. Of this number 24 per cent were assessed as damaged – meaning that they had lost more than 25 per cent of their leaves or needles in comparison with reference trees of the same species.

Of the four most common species in Europe – Scots pine (Pinus sylvestris), Norwegian spruce (Picea abies), European oak (Quercus robur), and beech (Fagus sylvatica) – the one most damaged was European oak. The most extensively damaged forests were found in the Czech Republic, Slovakia, and the southern parts of Poland and Belarus.
. . . .
Dr Martin Lorenz, who heads the all-Europe survey and works at the Institute for World Forestry in Hamburg, Germany, comments:

"I hope that our report still leaves no doubt that defoliation has a lot of causes, but it has indeed been possible over the years to collect ever more indications for the plausible assumption that air pollution is involved. . . ."

Keep in mind that this statistic for damaged leaves is counting standing trees, not those that have already fallen over or been removed.
I thought this was interesting:

(Dick Jaegels, University of Maine Forest Biologist) Some of the things we know that polluted fog does is that when it deposits on the leaf's surface it can affect the waxes that are on that surface and the waxes on a leaf surface are very important in protecting leaves from desiccation, from infection by fungi, from damage by ultraviolet light; for a number of reasons these surface waxes are very important on leaves.

excerpts from
TREE DEATH AND FOREST DECLINE
by Paul Donahue

"One criticism often leveled by opponents of stricter air pollution standards is that acid rain or other pollutants don't kill trees, that they are actually killed by cold winters or by insects or fungus or some such agent. In a sense these critics are correct - it is true that cold or insects or fungus or some other pathogen is often the ultimate cause of tree death rather than pollutants. But one might fairly ask why in the latter part of this century are so many pathogens suddenly having such a tremendous effect on so many species of trees. If just one or two species of trees were suffering a decline in eastern North America, maybe it would be acceptable to simply blame the weather or some pathogen and dismiss the problem as unfortunate but unavoidable. But that is hardly the case. Instead, what we are witnessing across most of eastern North America is a pandemic of tree death.

We need to take the wider view and look on these pathogens as representing only the proximate causes of death, and see forest decline and tree death across eastern North America for the pandemic that it is. Our industrial society with its attendant air pollution is slowly killing our forests, as it has the forests of eastern Europe, weakening and stressing trees, and making them more susceptible to cold winters and attack by pathogens.

A good analogy can be made between acid rain and AIDS. You don't die from the HIV virus, you die of the diseases you contract because of your depressed immune system. The same holds true of atmospheric pollutants and trees. It is often not the pollutants that kill the trees but the insects, viruses, fungi, or bacteria that attack once the trees' overly-stressed immune systems are weakened."

I would only demur, most of these these quotes are from research and publications that are almost a decade, old, and we are no longer "slowly killing our forests." We are killing them really, really fast now.
Posted by Gail Zawacki at 3:34 PM