In this post are screenshots and notes I made from a lecture by James White of INSTAAR, U Colorado Boulder, given last week at the annual meeting of the AGU (American Geophysical Union) in San Francisco.  Anyone can see it, for free, although it requires jumping through some hoops to register.  Here is the link I used to access it - you can try to login as me (email witsendnj@yahoo.com, password agupass1) or register yourself and search for James White in "Virtual Options" at the conference home site.  It is well worth persistence to see.

The title refers to his recent study, "Abrupt Impacts of Climate Change:  Anticipating Surprises" that was co-authored by numerous scientists and published by the US National Academy of Science (free download here).  He begins by defining aspects of "abrupt" as, among other perimeters, occurring within the lifespan of a human - since after all, he declared with ironic emphasis, "it's all about us".  In other words, if we don't feel immediate impacts, we won't do anything about it (if then).

He refers to himself as a paleoscientist, and much of his research is in the cryosphere - the study of climate change as it has been recorded in ice.  Amazing new technology has enabled him to reconstruct the deep past by studying the slivers of evidence in cores with great efficiency, and what he has found should be of gravest concern to anyone who is the slightest aware of the dangers inherent in climate change.

There were some moments in his talk that I applauded, others that caused me grief, and some that made me laugh with derision.  One of the latter was his so-called solution to overpopulation, which is to "empower women".  It is gratifying that he understands and at least mentions that population is a problem since very few in the sphere of climate do - but he misses the fact that growth is a function of technology increasing food, and instead thinks that cultural changes will control it. 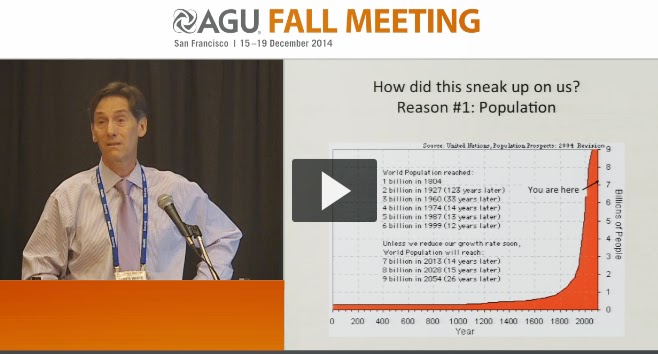 Equality between the sexes only exists anywhere thanks to the surplus luxury of cheap energy.  This fundamental facet of human behavior seems to have escaped him.  He places the pressures of population, however, as being overwhelmed by the problem that billions of poor people want lifestyles comparable to the wealthier citizens of the world, and that their concurrent increase in consumption of goods and energy per capita is far more significant than the absolute number of people.  He calls it the "nasty dilemma".  Thus, "empowering women", which will only happen through greater economic progress and consumption in developing nations, is logically inconsistent with his assertion that extending justice to the billions of people who aspire to energy and pollution intensive lifestyles is the greater threat. 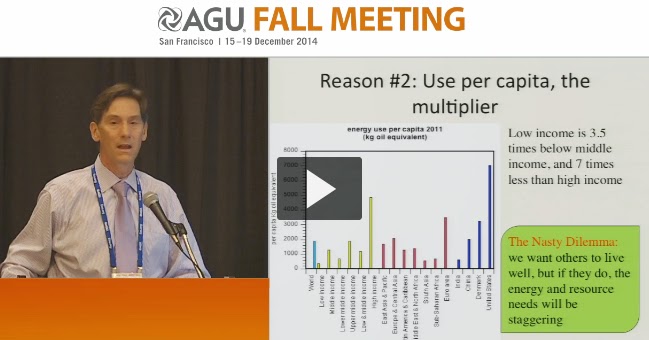 Most of his talk is concentrated on tipping points and thresholds, in human as well as natural systems. He compares them to a canoe just about to plunge over Niagara Falls, which is well past the tipping point, or threshold, where changing course would have made a difference.  The fear is that you can't see the falls until it is too late to get off the river.  He acknowledges numerous potential tipping points including the loss of plants to absorb CO2, but he avoided the lethal potential of methane clathrates, and concentrated on sea level rise for some solid reasons.  Sea level rise is already happening, as is evident on islands and low-lying coastal areas.  It is unstoppable, because the thermal expansion will continue, as will the contribution from melting ice, particularly Greenland and Antarctica.  Sea level rise is accelerating, and will continue to accelerate - although no one knows exactly how much.

This enormous question he addresses by investigating past episodes of rapid sea level rise, as determined from studying ice cores, and the results are not reassuring, at all.  From the rapidity of sea level rise, he extrapolates the warming that would necessitate ice melt, and it is staggeringly fast.

Each slide indicates worse and then worse scenarios that have occurred in the past. 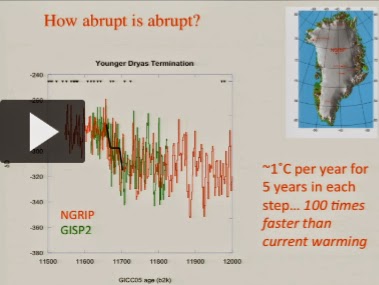 He indicated that the results of his studies are so preposterously alarming that he and his colleagues don't even present them all. 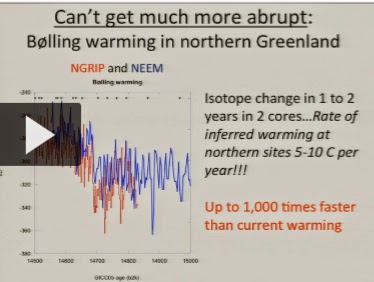 Below is a video of Jeremy Jackson, in the latest iteration of his fabled "Ocean Apocalypse" speech, which is as usual riveting - and yet has received a pathetic audience on youtube of less than 30 views since he spoke at Franklin & Marshall on November 25.  As always, he does a good job of integrating the multiple negative impacts of human activity on the ocean, and delineating the relevance to those species who make their home on the land.  He made his usual droll analogy for the horror that should accompany coral reef decline to how people would react if suddenly all the trees died - of course not recognizing that in fact, the trees ARE dying, and hardly anybody even notices and if they do, they certainly don't care enough to give up cars and electricity to save them.  Despite his efforts to educate the public about overfishing, acidification, pollution, and warming, he still holds out hope that engagement in the political process will regulate human activity so that ecosystems can recover.  This, of course, is nonsense - if the Obama presidency has proven anything, it is that no matter how much politicians nibble around the edges, consumption and pollution continue to increase globally - see for example, the article, "As US cleans up, it's exporting more pollution" which says:


Heat-trapping pollution released into the atmosphere from rising exports of U.S. gasoline and diesel dwarfs the cuts made from fuel efficiency standards and other efforts to reduce global warming in the United States, according to a new Associated Press investigation.

Under President Barack Obama, the U.S. has reduced more carbon pollution from energy than any other nation, about 475 million tons between 2008 and 2013, according to U.S. Energy Department data. Less than one-fifth of that amount came from burning less gasoline and diesel fuel.

Yet the U.S. is sending more fuel than ever to other parts of the world, where efforts to address resulting pollution are just getting underway, if advancing at all. U.S. exports of gasoline and diesel released roughly 1 billion tons of carbon pollution into the atmosphere elsewhere during the same period, according to AP's analysis.

This fossil fuel trade has helped President Barack Obama meet political goals to curb carbon dioxide at home, by taking it off America's pollution balance sheet. But that does not necessarily help the planet.