When Every Leaf is a Flower

Autumn is a second spring when every leaf is a flower.
~ Albert Camus

That certainly was once true...but no longer.  The leaves pictured here are typical right now in New Jersey, still weeks before "peak" fall color is traditionally expected nearer the end of this month.  Every autumn the leaves have had less vibrant color, displayed more egregious injury, and dropped sooner.  This year their condition is so dreadful, it is nothing short of shocking. 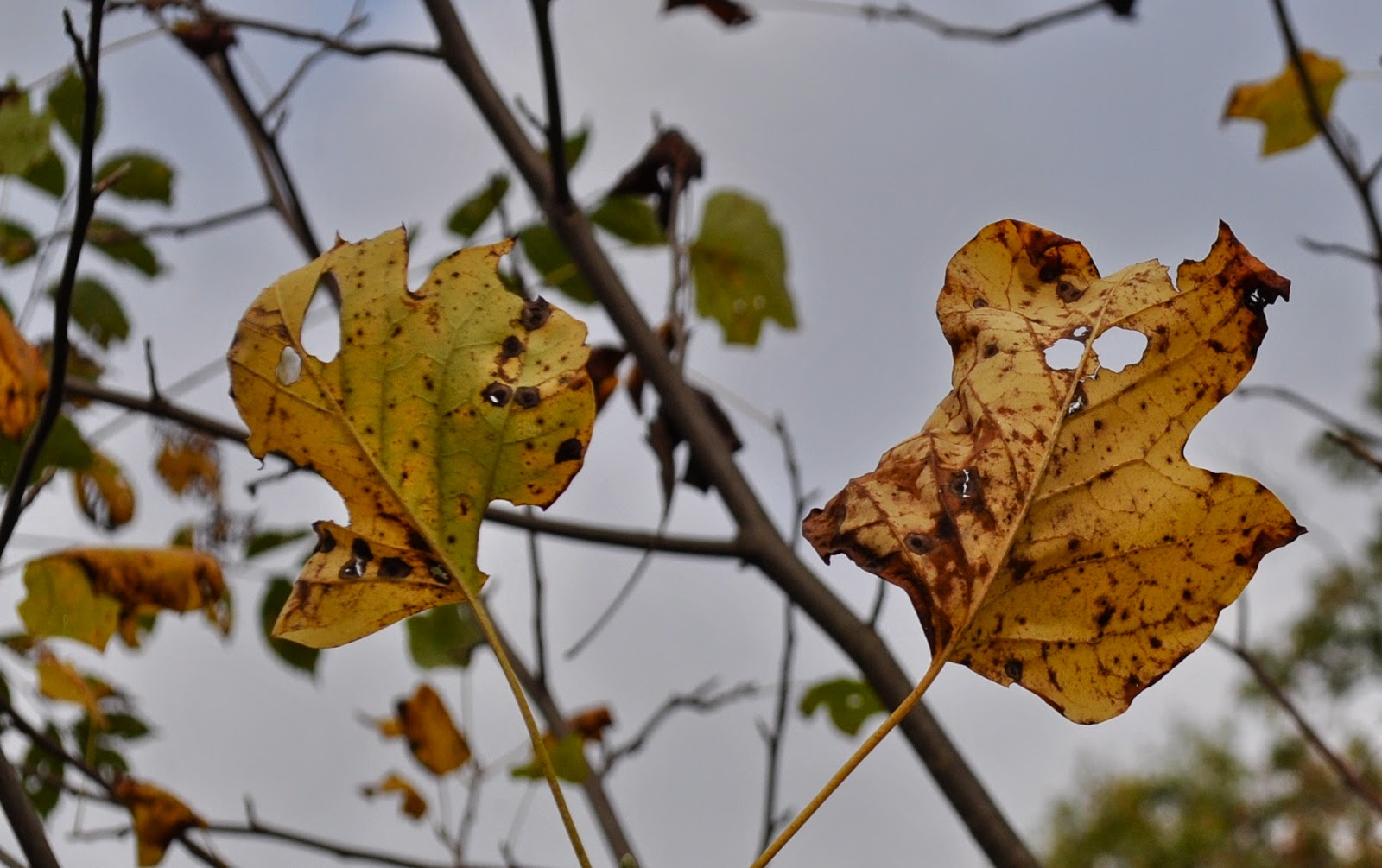 The leaves above, from the day before yesterday (October 4) belong to a tulip tree I planted which is now about ten years old.  Earlier, on September 29, it is exhibiting classic symptoms of ozone damage where the older, inner leaves are more damaged than the greener, younger leaves at the tips of the branches: 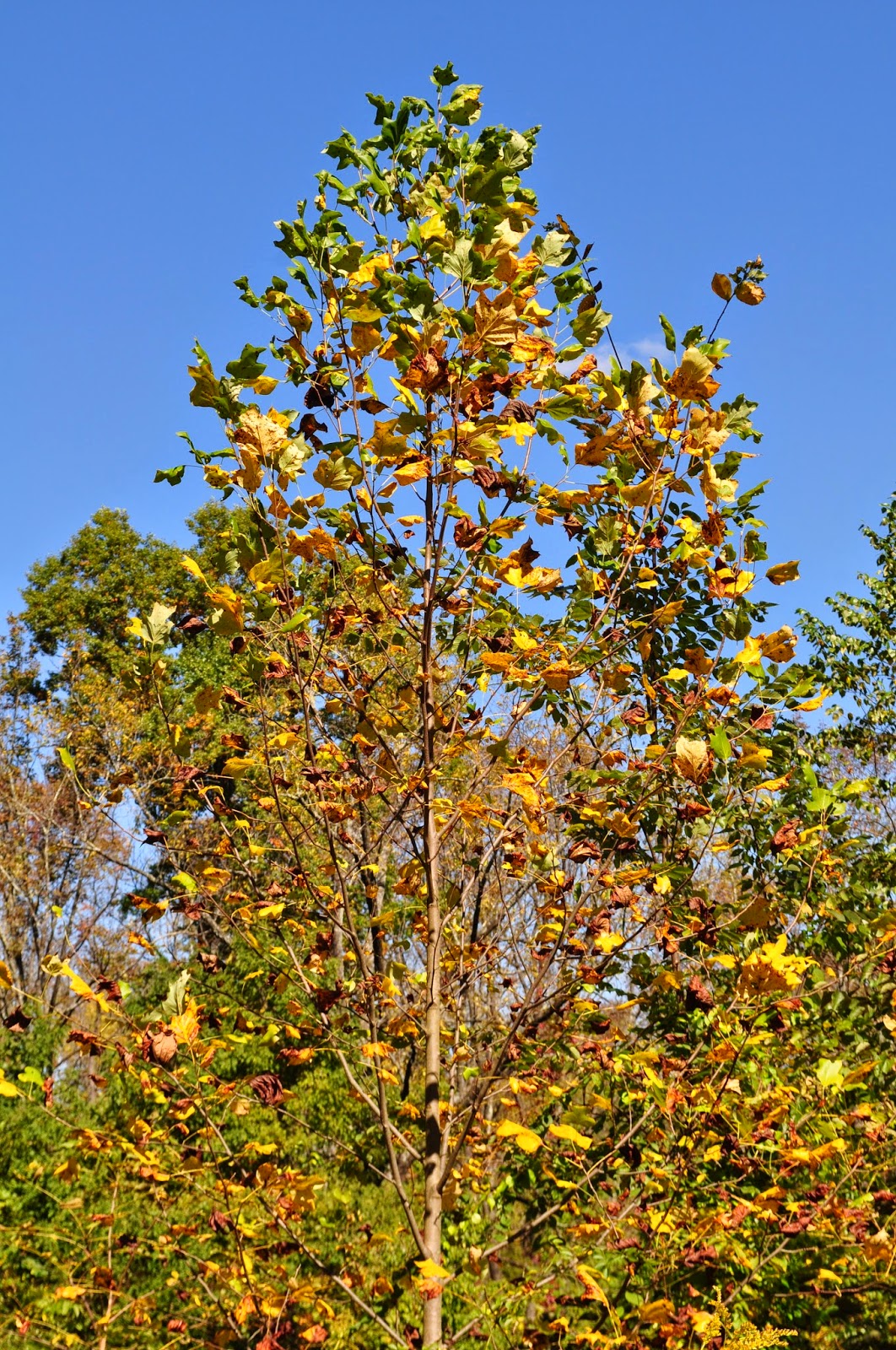 Just next to it, on the same day, is a sycamore, showing the identical pattern.  This type of decay cannot be from drought or UV radiation or warmth or cold. 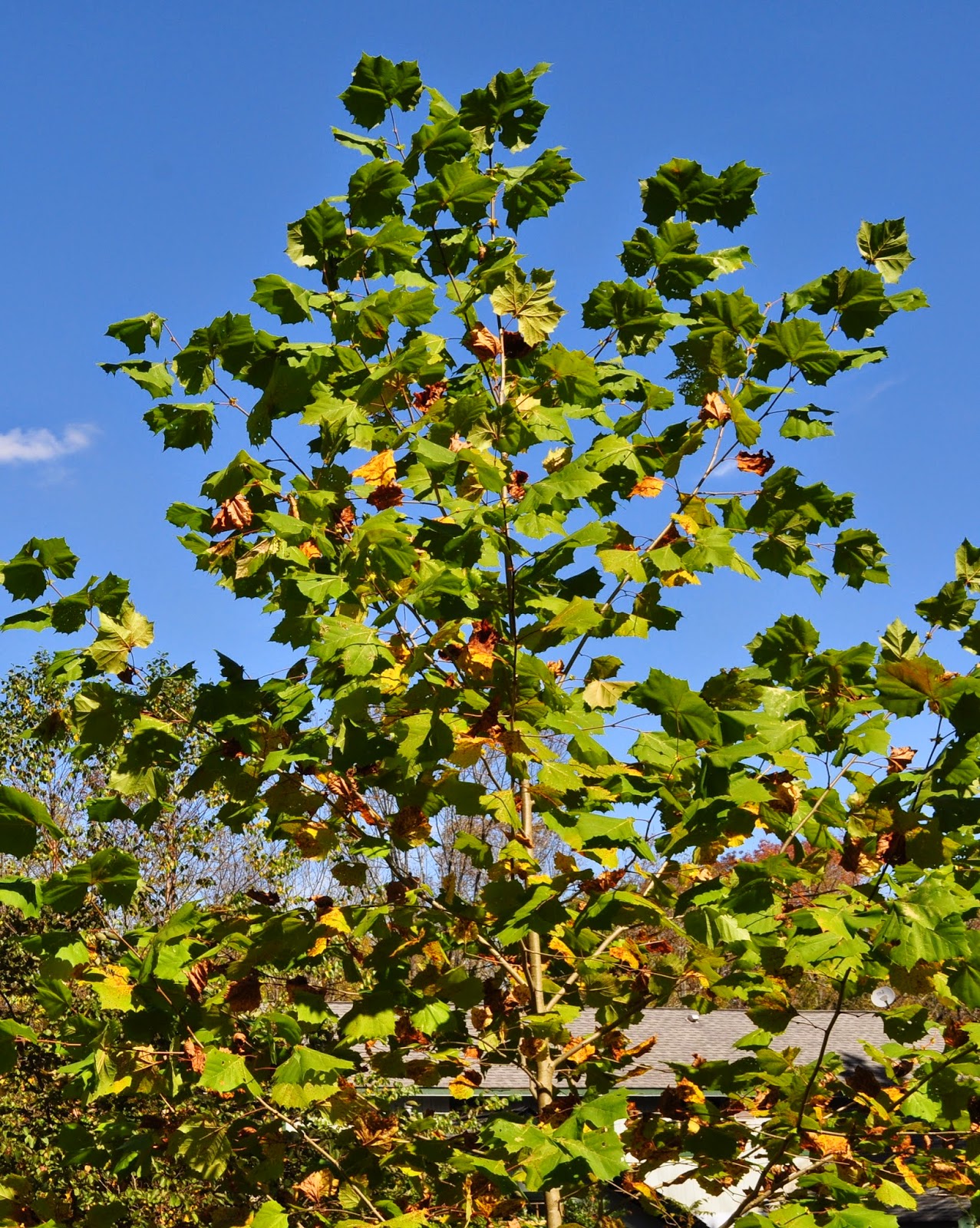 The same sort of damage can be seen irregardless of species, or whether an annual plant or a tree.  Below is a branch from a redbud, where the leaves first go chlorotic (losing chlorophyll and their natural pigmentation) to having brown lesions. Eventually the lesions become necrotic, and if the leaf doesn't fall off prematurely, they can turn completely shriveled and black.


This maple leaf on the ground gives only the merest hint of the brilliant color that should begin to emerge in early October. 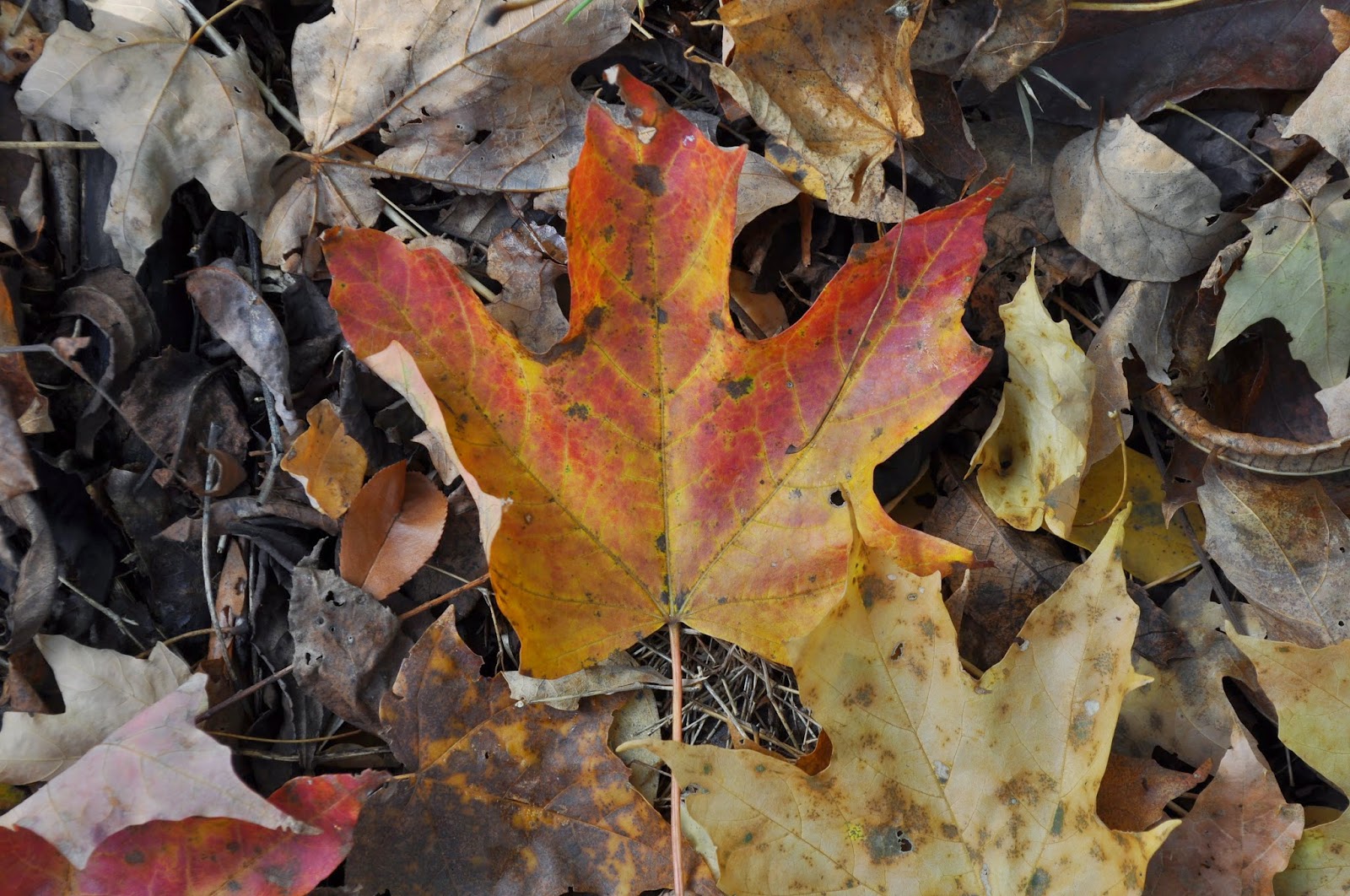 But mostly they are scorched... 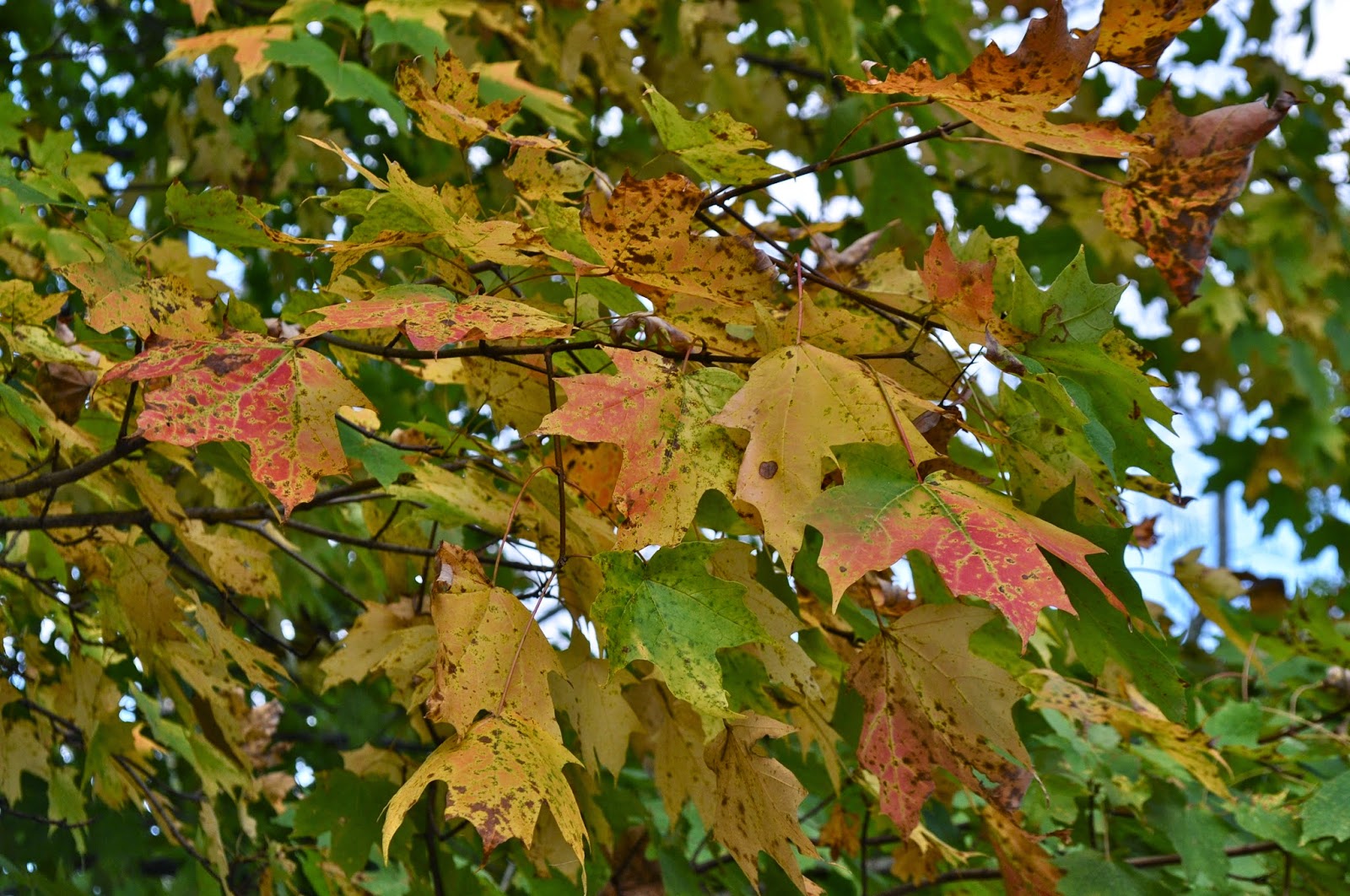 and falling to the ground a month ahead of normal. 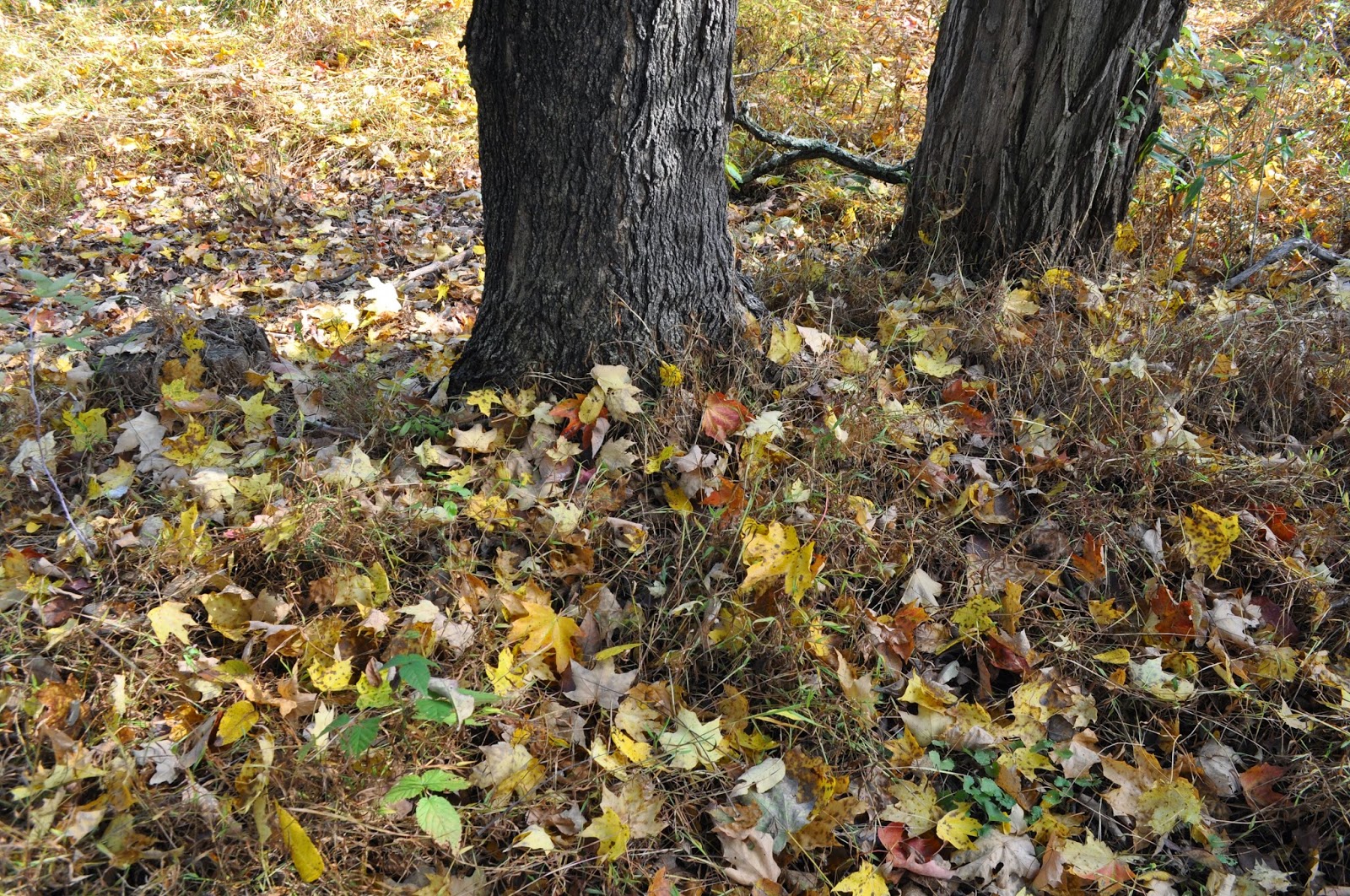 They are already swirling in the creek. 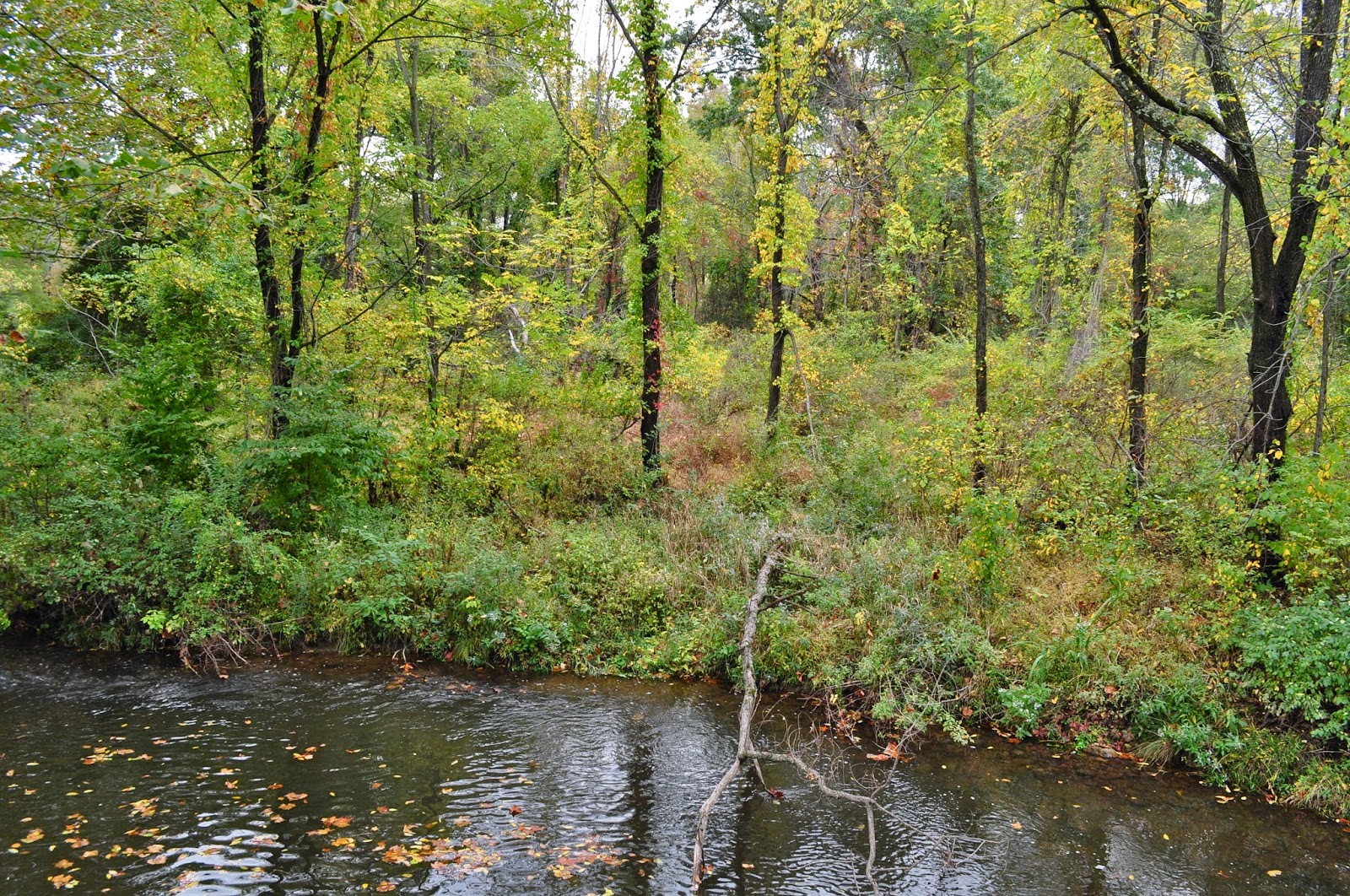 They fill the gutters on the side of the road.  That tall tree on the left is an oak and shouldn't lose leaves until November, if then.  On the right completely bare branches of a massive black walnut protrude. 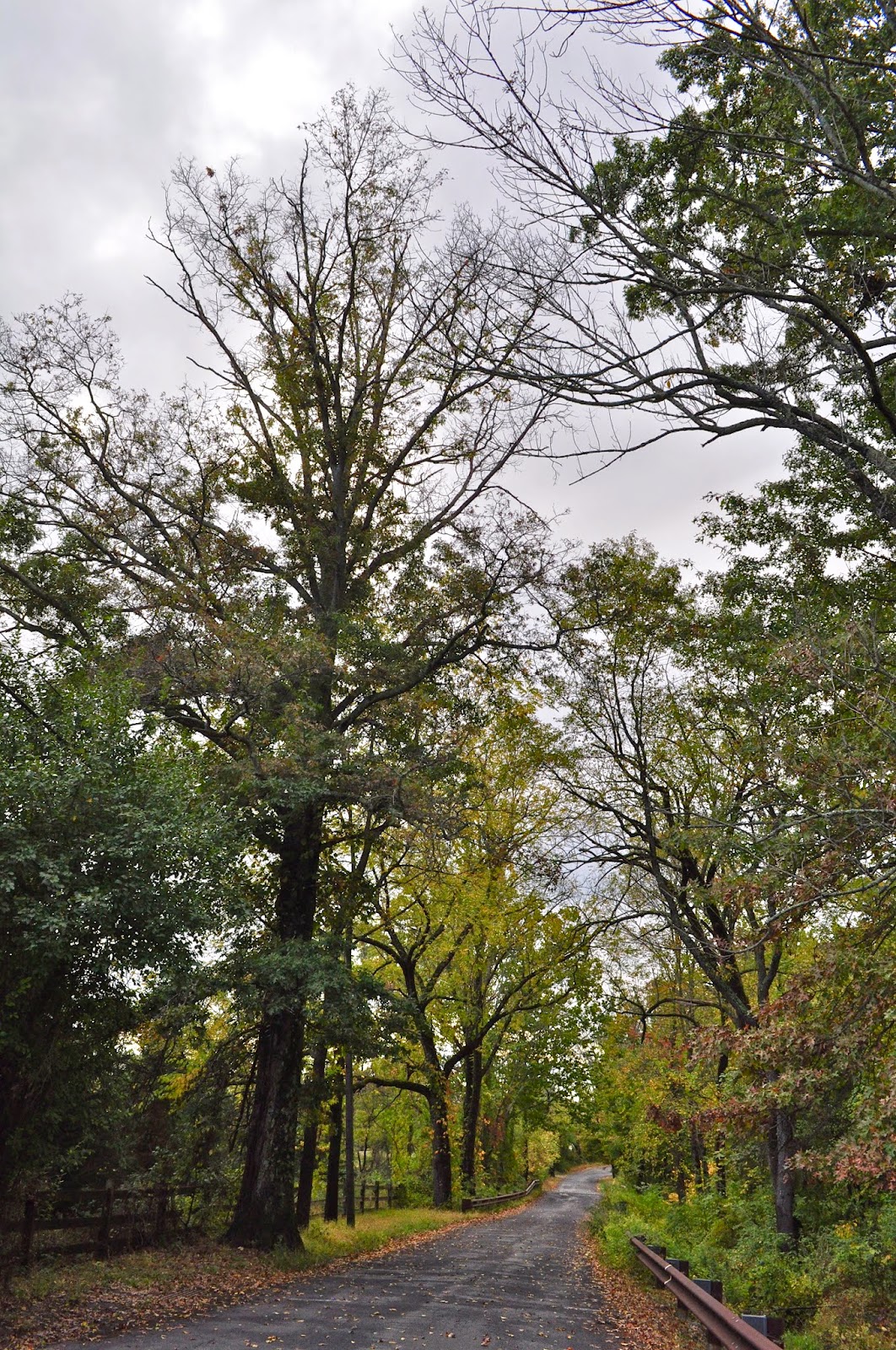 I watch the leaves flutter down in the slightest breeze...can't you see them? 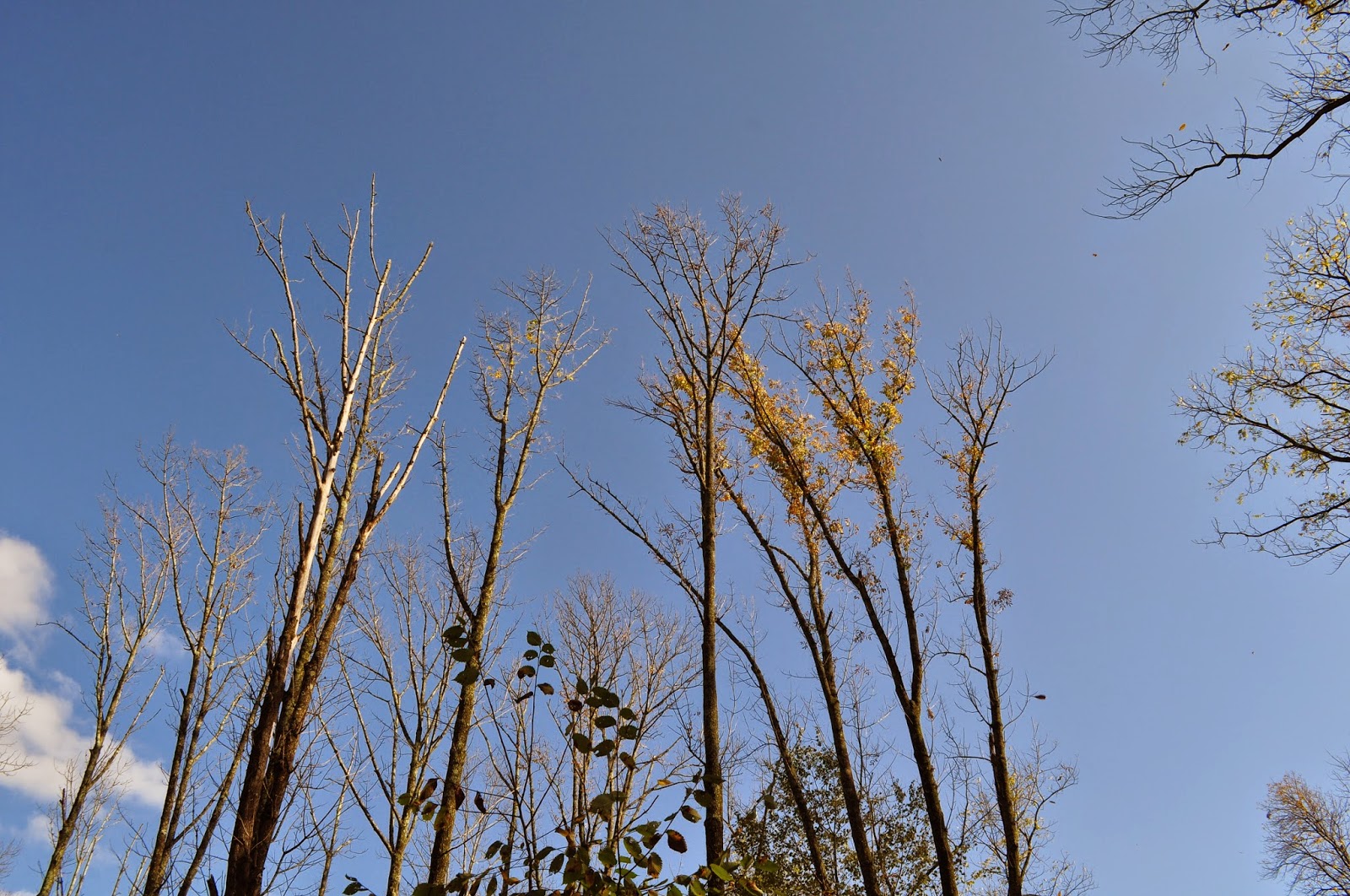 They remind me of the people falling in silent anguish from the twin towers, so tiny and faraway, in a lonesome journey to their death.  If spectators understood what this early leafdrop portends, they would be shrieking with just as much horror. 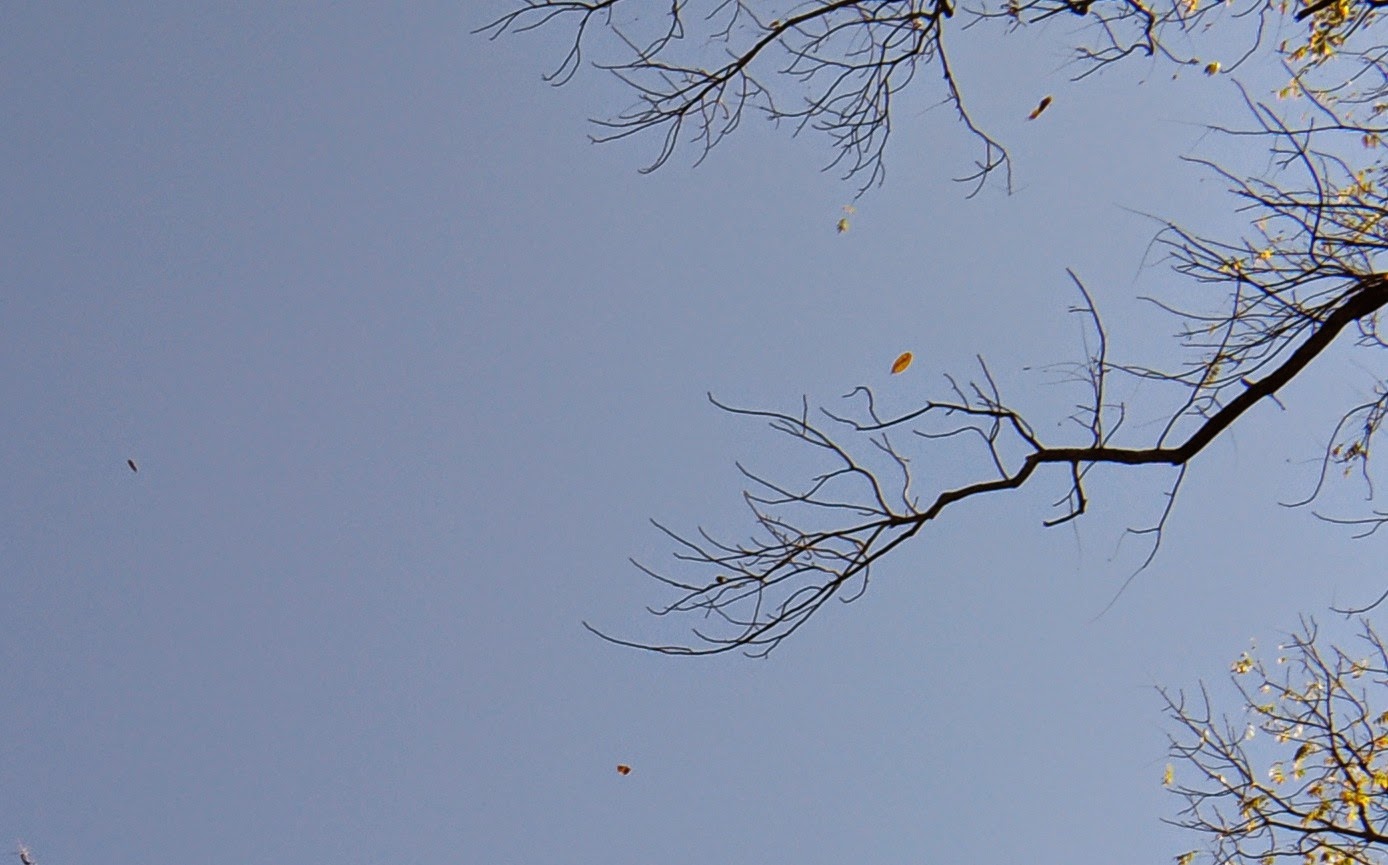 In case you haven't heard,  there is major drama raging in the blogosphere about the Royal Society methane meeting and the exclusion of the data collected by Russian scientists...so that's a nice temporary diversion from the death of trees.  The preliminary account is here but I'm sure there will be more to come.  Major criticism is being leveled at Gavin Schmidt, the new head of NASA and one of the proprietors of Real Climate, for jeering crudely like a callow juvenile in his public derision of those who are a bit more concerned about methane than he.
That reminded me of how I wrote him way back in 2009 to ask him what he thought might be responsible for all the trees dying, and he answered:

Thanks for your note. Unfortunately, I don't know of any pollution issue that would be responsible for this, and I am inclined to follow the statements of the people quoted in the piece that this is a combination of effects related to pests and drought. Sorry I can't be more help.

So imagine how annoyed I was to later come across a post in RealClimate from 2007 about research from the UK Met Office - written by Gavin himself, no less - which states in part:

"It’s well known that increased ozone levels – particularly downwind of cities – can be harmful to plants, and in this new study with a carbon-climate model, they quantify how by how much increasing ozone levels make it more difficult for carbon to be sequestered by the land biosphere.  Actually it’s even more complicated. Methane emissions are one of the principal causes of the rise of ozone..."

And now here he is, in his infinite smugness, still pooh-poohing the significance of the threat from methane emissions, whether it is increasing ozone killing vegetation, or a outgassing from permafrost and clathrates.
Other than that, today's only link will be to a more recent study from MIT, published this July.  Following is the university press release on the research, which talks about the loss to major annual crops from ozone.  It's critical to remember that since damage is cumulative, trees and other longer-lived shrubs and perennials HAVE to be even more affected - as indeed they are.  Just go take a look at them!  In a few days, I will put together more comparative studies from autumns past.  Right now this is about all I can stand to post, what ought to be gorgeous looks so abominable.
Study: Climate change and air pollution will combine to curb food supplies
Many studies have shown the potential for global climate change to cut food supplies. But these studies have, for the most part, ignored the interactions between increasing temperature and air pollution — specifically ozone pollution, which is known to damage crops.
A new study involving researchers at MIT shows that these interactions can be quite significant, suggesting that policymakers need to take both warming and air pollution into account in addressing food security.
The study looked in detail at global production of four leading food crops — rice, wheat, corn, and soy — that account for more than half the calories humans consume worldwide. It predicts that effects will vary considerably from region to region, and that some of the crops are much more strongly affected by one or the other of the factors: For example, wheat is very sensitive to ozone exposure, while corn is much more adversely affected by heat.

The research was carried out by Colette Heald, an associate professor of civil and environmental engineering (CEE) at MIT; Amos Tai, a former CEE postdoc who is now at the Chinese University of Hong Kong; and Maria Val Martin at Colorado State University. Their work is described this week in the journal Nature Climate Change.
Heald, the Mitsui Career Development Professor in Contemporary Technology, explains that while it’s known that both higher temperatures and ozone pollution can damage plants and reduce crop yields, “nobody has looked at these together.” And while rising temperatures are widely discussed, the impact of air quality on crops is less recognized.


The effects are likely to vary widely by region, the study predicts. In the United States, tougher air-quality regulations are expected to lead to a sharp decline in ozone pollution, mitigating its impact on crops. But in other regions, the outcome “will depend on domestic air-pollution policies,” Heald says. “An air-quality cleanup would improve crop yields.”
Overall, with all other factors being equal, warming may reduce crop yields globally by about 10 percent by 2050, the study found. But the effects of ozone pollution are more complex — some crops are more strongly affected by it than others — which suggests that pollution-control measures could play a major role in determining outcomes.
Ozone pollution can also be tricky to identify, Heald says, because its damage can resemble other plant illnesses, producing flecks on leaves and discoloration.

Potential reductions in crop yields are worrisome: The world is expected to need about 50 percent more food by 2050, the authors say, due to population growth and changing dietary trends in the developing world. So any yield reductions come against a backdrop of an overall need to increase production significantly through improved crop selections and farming methods, as well as expansion of farmland.

While heat and ozone can each damage plants independently, the factors also interact. For example, warmer temperatures significantly increase production of ozone from the reactions, in sunlight, of volatile organic compounds and nitrogen oxides. Because of these interactions, the team found that 46 percent of damage to soybean crops that had previously been attributed to heat is actually caused by increased ozone.

Under some scenarios, the researchers found that pollution-control measures could make a major dent in the expected crop reductions following climate change. For example, while global food production was projected to fall by 15 percent under one scenario, larger emissions decreases projected in an alternate scenario reduce that drop to 9 percent.
Air pollution is even more decisive in shaping undernourishment in the developing world, the researchers found: Under the more pessimistic air-quality scenario, rates of malnourishment might increase from 18 to 27 percent by 2050 — about a 50 percent jump; under the more optimistic scenario, the rate would still increase, but that increase would almost be cut in half, they found.

Agricultural production is “very sensitive to ozone pollution,” Heald says, adding that these findings “show how important it is to think about the agricultural implications of air-quality regulations. Ozone is something that we understand the causes of, and the steps that need to be taken to improve air quality.”
Denise L. Mauzerall, a professor of environmental engineering and international affairs at Princeton University who was not involved in this research, says, “An important finding … is that controls on air-pollution levels can improve agricultural yields and partially offset adverse impacts of climate change on yields. Thus, the increased use of clean energy sources that do not emit either greenhouse gases or conventional air pollutants, such as wind and solar energy, would be doubly beneficial to global food security, as they do not contribute to either climate change or increased surface-ozone concentrations.”
The research was supported by the National Science Foundation, the National Park Service, and the Croucher Foundation.
Posted by Gail Zawacki at 1:35 PM