“Think of yourself as dead. You have lived your life. Now, take what’s left and live it properly.” 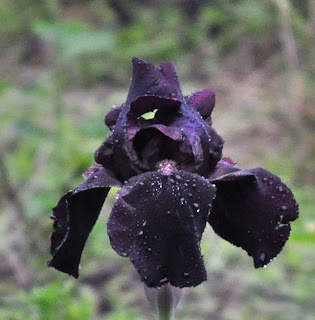 It has been a strangely entrancing but melancholy May.  Imagine, the title of this post was drafted days ago, before the havoc from the Oklahoma tornadoes.  I decided on it even before early wildfires began in unlikely places, and before the massive floods in China, because of the overwhelming sense that this spring's little calm hiatus here at Wit's End can only be temporary.  Anyone who is paying attention (and, apparently that's not very many!) has to be haunted by the knowledge that it's just a matter of time before more violent storms arrive.  The exact locations, the precise forms - droughts and haboobs and fires, hurricanes or typhoons, thunder and hail - will seem random...but the extremes are now inevitable, everywhere, eventually. 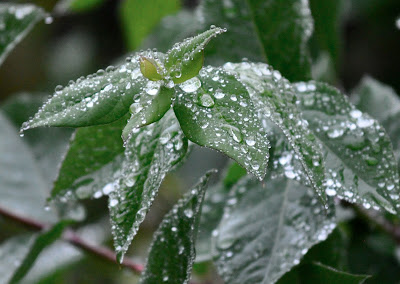 Cool intransigent weather has meant this season of rebirth has progressed with sporadic leaps, long parched weeks followed by welcome downpours when each drop of water clinging to the ambrosial honeysuckle seems preciously ephemeral to me.  Gardeners are relieved every time it rains, while the forest seems to be mired in suspenseful hesitation, many leaves still only partially unfurled.  It remains to be seen if some of the recalcitrant trees ever leaf out at all, and if those that have can retain their foliage through what could easily and abruptly become searing hot temperatures.  Though it may appear that a new layer of verdure has emerged, it is merely a verdigris mantle in deceptive shades of chartreuse, jade and viridian that for the moment obscures branches cracking underneath, brittle and scarred like the bony limbs of ancient, petrified crones disinterred by archaeologists. 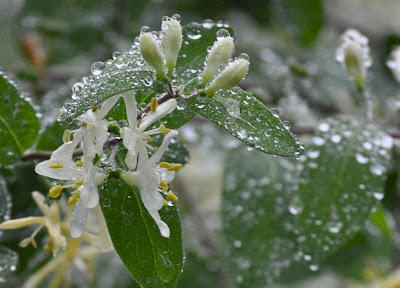 In such dysphoric times I find some measure of equanimity from the sentiment expressed in the quote at the top.  If only I could once again be one of the pococurante, one of the blithely oblivious majority - but once having peered into the abyss of ecological disaster, the sight cannot be erased because it is everywhere in the landscape.  Gaze deep and long enough, and beyond the initial stupefaction, the long entrapment by rage and grief and guilt, comes the slow realization it is too late for regrets or for blame.  Live what time is left properly - with joy and gratitude, with humility and grace, with love and forgiveness.  It's obvious most people indulge in hope, believing therein lies some escape from the fate evolution dictated by our essential survival instincts - but I consider that inaccurate not to mention a pointless exercise in prolonging self-torture.  As far as I can tell, there is nothing left but some uncertain amount of time; and unembroidered truth.  And that's not so bad. 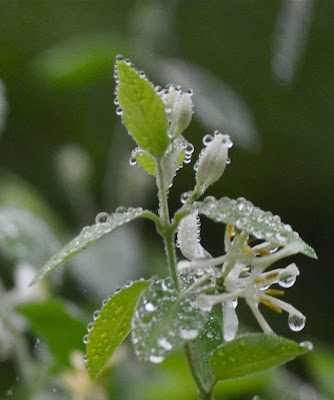 I haven't got time to put together a post with all the latest information about pollution killing trees, because I'm getting ready to leave for the Age of Limits meeting, but there is one tragedy I just learned of that should not be neglected, which is the controversial plan to remove staggering numbers of trees in California - thousand upon thousands.  Links to two articles are here and here.  Most people who are outraged are no doubt blind to the destruction that is already largely complete.  It's small wonder that authorities are trying to eliminate vegetation, since it is dying or already dead tinder waiting for an inferno that will be lethal, especially since fire fighting budgets are cut, and housing subdivisions increasingly encroach on forest lands. 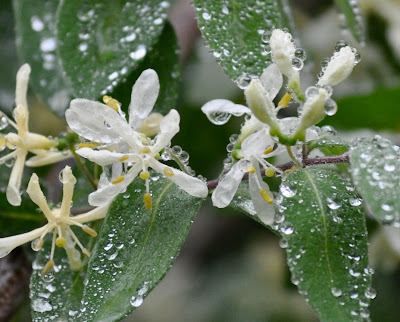 Speaking of building in places that shouldn't be, am I the only one who looked at the pictures of the tornado damage and thought, why are we building in places that are known risky areas?  Frankly this kind of suburban sprall is tragic even if the houses were all still standing - what are we thinking of?  If we're not drilling it or blowing it up, we're covering it with pavement and toxic patches of useless lawn. 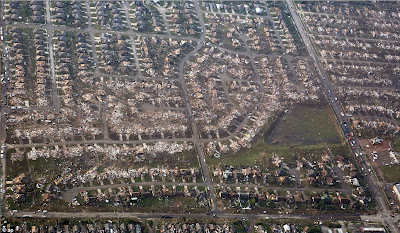 Why are there schools constructed in the path of monster hurricanes without any sort of shelter for children?  Why was one of the very first things rescued out of a flattened elementary school the Confederate flag? 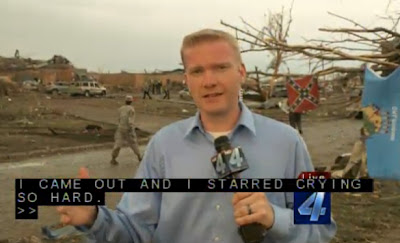 Oh wait - I would be remiss if I didn't also allude quickly to the most recent terrifying videos (transcript here) by David Wasdell, who makes a good case that a huge increase in sulphate aerosols from Asia has been reflecting UV radiation, thereby artificially (and only temporarily) averting the warming from CO2 emissions that would otherwise have taken place in the last decade - a dip that can be plainly seen beginning in 2000: 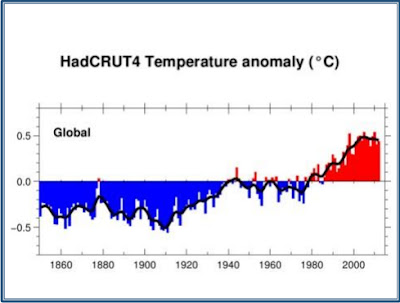 In addition to helping to explain why the Arctic is heating so much faster, this pollution can be taken - why not? - as a reasonably accurate proxy for the production of ozone precursors which likewise travel around the world, going in and out of chemical reactions according to exposure to sunlight and encounters with volatile organic compounds.  This of course is the most likely explanation for why there has been a rapidly accelerating rate of background tropospheric ozone concentratins, with the concurrent result of premature tree death...and visible damage on foliage by the end of every summer, indicative of extreme root and internal injury.  And let's not forget that the methane released from melting permafrost is itself a contributor to ozone formation. 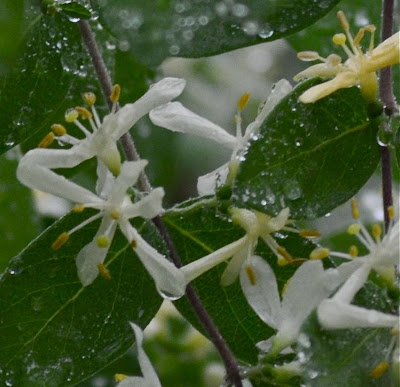 The two poems that follow were written by Patrick Lima.  I first became acquainted with his work in his comment to Nature Bats Last.  Remarkably, although he lives far away, Patrick has observed the exact same declines - in the fluent volubility of birds, in the irrepressible vibrancy of trees - that are recorded with mournful regularity here at Wit's End.  Thank you, Patrick, for permission to publish. 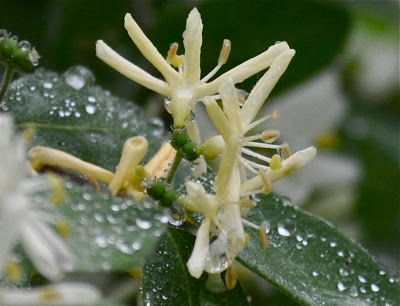 Discordant harmony
a unison of
trills and peeps
of shrieks and caws
of gurgles, flutes
and piercing cries
so loud
the very air
crescendoed
with great joy

The Maple and The Birch

Along the road I daily walk
a birch, a maple grew
entwined,
and limbs laced through
they occupied
the space of one.

And as they reached
all trusting to the sun
their un-twinned bodies
pressed so close that
flesh had fused
in places here and there
along the lusty trunks,
joined branch on branch
the peeling black and white
the marbled grey
together.

Every day
along the walking way
I passed them
in all seasons and all lights,
companionship of limbs and leaves
- serrated birch, the maple we all know –
two trees in arms
as one.

‘Til summer heat began to sear
and leaves so finely tuned
to distant fire
to shrink from sun
they once had sought
as life itself.

Pale birch the first to burn,
its leaves to rust and fall
before the frost could even slice
with silver knife -
one glistening night
then weeks of flame and glory.
Not now, instead,
an ugly August autumn.

Belittled leaves exposed
the tender tops
that drying in
the now fierce heat
began to break
to fall to bits
at first unnoticed
then – crack – a larger limb
came down
and then another -
jagged stumps, like war wounds,
where once whole branches
wet with sap
had soared.

Until today
I saw the birch had died,
its brittle sun-scorched trunk
snapped through – Who heard? –
and now
the charred and shattered top,
hangs
caught and held
in friendly arms.

How long the maple tree will live
I cannot say,
but will daily pass this way,
a sad and silent witness
to what end? 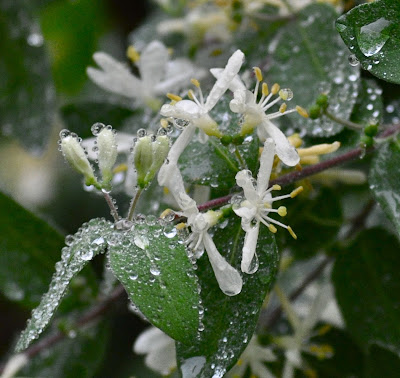