Last Monday I went to court for the fourth time for my arrest at Occupy - and once again, the "people were not prepared" to go to trial.  This was particularly infuriating because I had to get up at 5 a.m. to be sure I would arrive in New York on time, since the trains are still not recovered from Sandy (for new visitors, there are pictures of rotted trees on earlier posts such as here and here).  NJ Transit replaced the railcars with shuttle busses, piloted by bewildered drivers - city dwellers who might have been exiles from another planet so little notion did they have how to navigate the winding country roads to obscure stations.  The passengers gave them directions and we tried to keep them from ending up with their huge vehicles wedged in impossibly tight turns.  Next I had to take the ferry to lower Manhattan, and finally, the subway.  I made it just in time for nothing.

Apparently, since the entire incident is on videotape, the "people" have figured they cannot win and so they have decided to run out the clock until the allowance of time to prosecute is exceeded, and then our case will be dismissed for procedural reasons.  What an outrageous, rigged system - for Bloomberg's army to be able to harass citizens who are peacefully exercising their First Amendment rights, with no consequence.  It appears we have no recourse.  Our democracy, in case you hadn't noticed, is a corrupted sham. 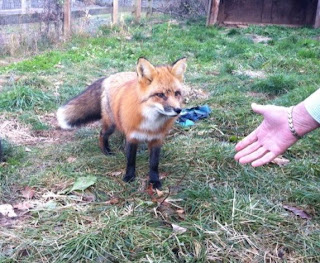 Anyway...the shuttle service didn't resume in the outbound direction until late afternoon so after that farce I decided to spend the rest of the day uptown.  I had intended to go to the Metropolitan Museum, forgetting that it is closed on Mondays...but that was okay because instead, I took a long walk through Central Park.  I had never been to that section of the park before - looking at a map there, I was astonished at what an enormous treasure it is, taking up a large portion of the city.  Seeing new things is one of my greatest pleasures now, because to witness the deterioration of places I know well is too sad.  So, the next post about ozone killing trees will have pictures from one week ago - but first, a report about our Thanksgiving weekend.  Even Wick the fox had a feast. 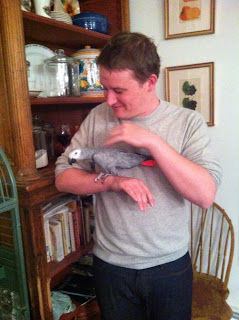 I was too busy cooking to take any pictures, so these are from middle daughter's cell phone. 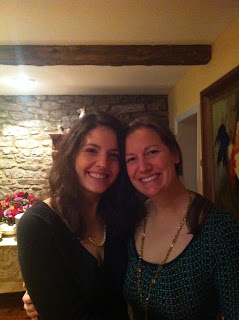 In between three runs to the airport to fetch two daughters plus a significant other, I cooked (with plenty of help!) two meals, first for Thanksgiving proper (eight of us) and then our annual Friday night redux at Bramblefields, for friends and the other side of extended family (over thirty altogether). 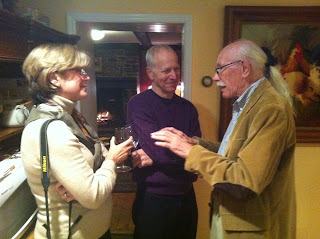 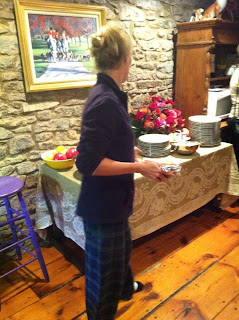 It was wonderful to have all three of my daughters in one place, which occurs too rarely - and everytime it does I am haunted with the foreboding that this murderous world will come to a standstill in one sort of paroxysm or other, and it will never happen again because they will be trapped, too far from home to return.  I love seeing them happy together, laughing, playing charades and rehashing old episodes of hilarity.  They are all planning for the future as though it will be as benevolent and generous as it has always been, for which I think they are smart.  There is no way to prepare for ecopocalypse, no way of predicting how and where and when it will unfold. 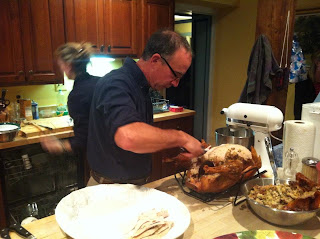 On Saturday the four of us went to a matinee of The Life of Pi.  I hadn't read the book, but the movie was fascinating.  Even though I intend to spoil the plot, it doesn't matter because the cinematography is so exquisitely and lusciously filmed that you will not regret seeing it.  I have been thinking about it quite a bit, particularly because of recent encounters with Moby Dick - chronicled in The Final Puff, which led me to visit Nantucket (Torches of Freedom). 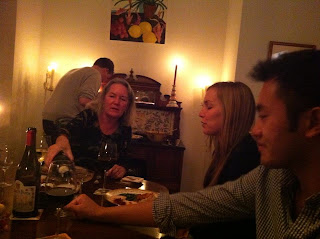 Both of these parables are about our ravenous devouring of Mother Nature, whose power is a major character in both of them - but Moby Dick is more about hubris on a grand, industrial scale, whereas Pi, I would say, examines the moral complexities of individual consumption (and is not at all about any sort of *triumph* as the hooplah advertising would have you believe).  Pi is shipwrecked on a voyage from his home in India to Canada.  In the story he shares a small lifeboat with wild animals from his family's zoo, including a tiger.  As we follow his epic struggles to survive, it becomes clear listening to the now grown man recount the tale that most of it is a carefully constructed fantasy - and that, horrific as the journey was as he describes it, the reality was even more gruesome. 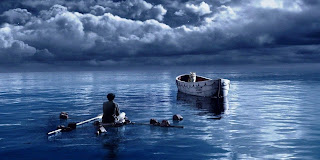 Earlier in the story, a very young Pi decides to sneak into the chamber leading to the tiger's cage and get close to him by offering him some raw meat through the gate.  Just in time his father rescues him, furious.  Pi tells him that he didn't believe the tiger would harm him because he had looked into his eyes and seen his soul.  "He has no soul" his father yelled incredulously, "you saw the reflection of your own emotions".  (Perhaps that is also what ecologist Aldo Leopold mistook, sentimentally, when he famously saw the "fierce green fire" in the eyes of a wolf - also now a movie about the history of environmentalism, coming to a theater near you, maybe.) 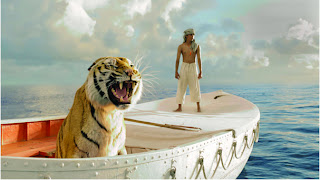 To make sure Pi understands, his father forces him to watch as he has a little goat tied to the spot where Pi had been, which is swiftly torn apart by the tiger.  Should the tiger feel guilty about eating the goat?  This is an important question, because Pi and his mother are religious and vegetarian, to the disgust of the father, who is "scientific".

In Pi's preferred version, by the time the boat washes ashore on a beach in Mexico, the tiger has eaten all the other animals that were adrift with them and quite a few fish besides.  Pi is bereft when the emaciated tiger, with whom he believes he has bonded, disappears into the jungle without a goodbye, or even a glance backwards.  This becomes significant when we learn the other version - the much uglier, cannibalistic version like the true story of the Essex which inspired Moby Dick - in which Pi himself is the tiger, and the animals were other human survivors of the shipwreck, at least one of whom he ate.

Humans are large carnivorous animals.  We like to look back...we like to think we have souls.  We like to think our marvelous conceits - Mozart and Monet, Galileo and Shakespeare - set us apart from other animals in some profoundly cosmic way.  But really, we are creatures with a top predator temperament and we can no more restrain ourselves from devouring everything in sight than the reindeer who ate all the lichen on St. Michael's Island.  Perhaps, the more principled individuals among us can choose to be, say, vegetarian...but when the trappings of civilization are stripped away, certainly as a species we will revert to our inner tiger. 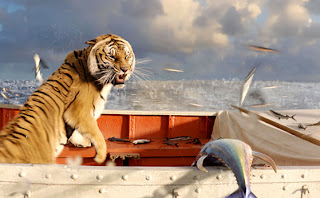 Unfortunately, now the world is like that boat lost on the sea - there is no second earth from which to extract more resources or sequester our pollution, and even though we have the ability to look back and weep, we can no more change our fundamental selves than can a tiger.  Pretend as we might, we have no transcendent soul, only the reflections of our emotions.

On the upside, there is no need to feel guilty.


All the world's a stage,
And all the men and women merely players:
They have their exits and their entrances;
And one man in his time plays many parts,
His acts being seven ages. At first the infant,
Mewling and puking in the nurse's arms.
And then the whining school-boy, with his satchel
And shining morning face, creeping like snail
Unwillingly to school. And then the lover,
Sighing like furnace, with a woeful ballad
Made to his mistress' eyebrow. Then a soldier,
Full of strange oaths and bearded like the pard,
Jealous in honour, sudden and quick in quarrel,
Seeking the bubble reputation
Even in the cannon's mouth. And then the justice,
In fair round belly with good capon lined,
With eyes severe and beard of formal cut,
Full of wise saws and modern instances;
And so he plays his part. The sixth age shifts
Into the lean and slipper'd pantaloon,
With spectacles on nose and pouch on side,
His youthful hose, well saved, a world too wide
For his shrunk shank; and his big manly voice,
Turning again toward childish treble, pipes
And whistles in his sound. Last scene of all,
That ends this strange eventful history,
Is second childishness and mere oblivion,
Sans teeth, sans eyes, sans taste, sans everything.