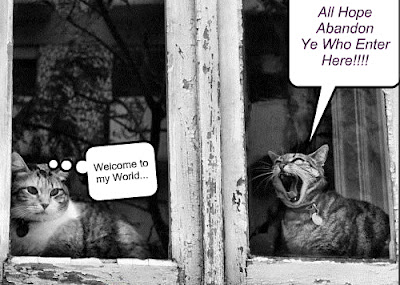 Yes, things are getting grim - some seriously disturbing reports follow.  I have more information about trees dying from pollution (of course!) but it's a little more complicated topic, and I want to go outside and see what's left of them - so this post will just highlight links to the "other" converging catastrophes that are a bit more straightforward.

I recommend reading this white paper from Sandia in its entirety - it will save you having to buy Fred Pearce's book, With Speed and Violence, which is an excellent read too.  But one sentence from the abstract of "Global Situational Awareness and Early Warning of High-Consequence Climate Change" may be all that's needed to convey what governmental agencies are probably talking about behind closed doors - and explain why they're not doing anything about peak oil and climate change, and are instead dismantling civil liberties and constructing FEMA camps and maybe railway cars with shackles as fast as they can:


"Global climate has changed abruptly in the past and will almost certainly do so again, even in the absence of anthropogenic interference.  It is possible that the Earth’s climate could change dramatically and suddenly within a few years.  An unexpected loss of climate stability would be equivalent to the failure of an engineered system on a grand scale, and would affect billions of people by causing agricultural, economic, and environmental collapses that would cascade throughout the world."

After you digest that, consider research reported in an article titled "Triassic era’s extreme heat created 'dead zones' across the planet" with the implications for the future:


"According to research done by Yadong Sun and Paul Wignall of the University of Leeds, UK, this was hottest era on Earth since it cooled down from its initial molten formation. Their study has reset notions of just how hot our planet can get — a disturbing bit of insight that could reset current models of climate change on Earth."

"The Smithian-Spathian extinction was time that characterized the shift from the Permian era to the Triassic, just before the emergence of the dinosaurs. By this point, the mysterious Permian Extinction had reduced the life on Earth to a select group of insects, plants, marine life (like fish, coral, sea lilies, and ichthyosaurs), and terrestrial animals (like insects and the reptilian tetrapod)."

"Sun and Wignall's research indicates that during this time, the heat at the tropical regions reached an astounding 50 to 60°C (122°F to 140°F) on land, while the waters at the surface reached 40°C (104°F). They were surprised to discover that the water could get that hot; previous estimates assumed that sea-surface temperatures could not surpass 30°C (86°F). Moreover, at 40°C, most marine life dies and photosynthesis stops." 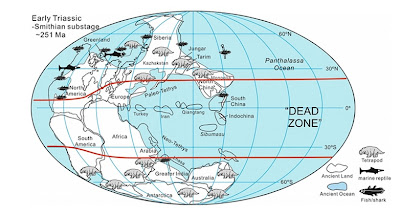 "What happened? Essentially, the superhot Earth was caused by a breakdown in global carbon cycling. Normally, plants help regulate temperature by absorbing CO2 and burning it as dead plant matter. But without plants, the CO2 levels rose unchecked, causing a spike in temperatures. Specifically, the researchers estimate that at least 12×103 gigatons of isotopically depleted carbon as methane was injected into the atmosphere."

"...without plants, the CO2 levels rose unchecked, causing a spike in temperatures."  Do you see where I'm going with this??? (thanks to Collapse of Industrial Civilization for the link!)

Meanwhile, in the real world, the ominous warnings from now both poles continue unabated.  It was just a matter of time before the evidence started to emerge that Antarctica is being affected by climate change in ways that had not previously been detected (it's very large and cold and hard to study), and will no doubt soon join all the other impacts characterized as "faster and worse than expected":


"Scientists were detecting major changes in the circulation of deep, dense salty water off Antarctica.  This water, which drives the circulation of the world's oceans and in turn climate patterns, was reducing, while becoming warmer and less salty.  Meanwhile, parts of the Antarctic ice caps were melting at unprecedented rates."

Of course the news from the Arctic has been causing researchers to become insomniacs and continues to raise alarms from them that would have been considered heretically "alarmist" not long ago, with titles such as "Global Extinction within one Human Lifetime as a Result of a Spreading Atmospheric Arctic Methane Heat wave and Surface Firestorm" or a blogpost titled "Albedo change in the Arctic threatens to cause runaway global warming" accompanied by these reassuring utterly terrifying charts. 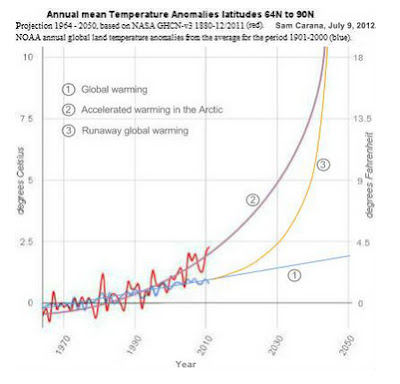 It's all about the trends!! 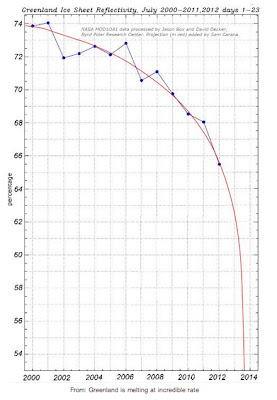 Even without climate change we have well and truly cooked our goose by plowing through non-renewable energy for which there is no replacement despite the fervent wishes of technophiles, as amply demonstrated in the excellent paper by Peter Goodchild, Chaos Abridged, which can be accessed here.

Also purely for fun, you might want to check out a forthright analysis of what should and must be done to save us from extinction, which concludes that because the tiny proportion of the wealthiest use such vastly greater resources, that they should and must sacrifice the most...and we all know just how likely that is!

So I confess that after reading all of the above, when somebody suggested something called the Venus Project might have some innovative approaches to our predicaments, I took a look at a video about it, such was my desperation.  Before I even finished it I was getting a bit suspicious of the notion that people are innately good and if only we weren't hobbled by nasty cultural norms we would all cooperate and share nicely.  The same somebody had also referred to the Zeitgeist Movement so I took a quick peak at their website and found they had splintered off from the Venus Project over some unnamed dispute that apparently involved the effort of the VP founder to patent the notion of a "renewable economy" or something...oh wait, "resource-based economy".  Well, that didn't sound too cooperative!

Thankfully, to spare readers of Wit's End the whiplash of this rollercoaster ride between hope and despair, Michele from Quebec sent this video that explains everything, everything in a most amusing way.  Tomorrow, back to the trees.