To Understand and Protect the Home Planet 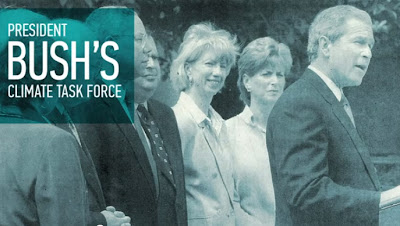 I wasn't planning to watch this TED talk, because I didn't expect to learn anything new.  But, a pile of dirty dishes had accumulated in the sink, so this morning I turned up the volume to hear over the splashing, and listened.  Aside from being just about the most powerful presentation about climate I've ever seen (especially so because of its brevity and Hansen's consistently self-effacing and modest sincerity), I did learn something new, which is referred to in the title of this post.  I took the screenshot above of Bush's Energy and Climate Task Force advisors (chaired by Dick Cheney) whose sordid deliberations remain secret to this day - so that after you watch the video, you can print the picture, tape it to the wall and hurl spitballs at Christie Whitman, who chose to resign rather than expose the other criminals who were personally twice warned by Hansen that by letting the climate was spin out of control we're destroying a habitable earth for future generations.  Have fun!