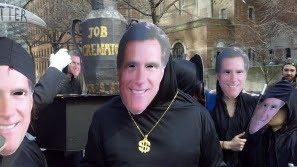 Today I went to the Occupy Wall Street snark attack "1% for Romney" march around the Waldorf-Astoria in New York, where the desperate candidate was hoping to replenish coffers depleted by the ongoing primary fight.
I, of course, went in costume with my sign "They said there would be cake?"
A young journalist from Italy asked me, "So, is it to Marie Antoinette you refer?  Le croissant??"
Exactly, I said.  Mitt Romney and his friends like Woody Johnson and Chris Christie are sociopaths in the identical mold of Marie Antoinette...only not as pretty and accomplished.  They have the same utter lack of empathy with others who are less fortunate than they, and possess the same erroneous belief that they've actually done something special to earn their obscene wealth and extravagant lifestyles. 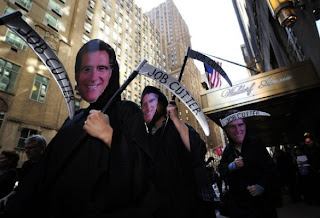 Dumb luck has enabled the one percent to be in a position to pollute the air and water without  consequences, as well as exploit vulnerable people - and even worse, to pillage the ecosystem, which is irreplaceable.  They are so devoid of compassion that not only are they consigning the vast majority of species to extinction, they don't even stop to realize that for the sake of their Cadillacs and jets, their champagne and caviar, they are robbing from their own children and grandchildren - who will inherit a perilous and uninhabitable climate that will destroy the rest of humanity (the ones they think are expendable).
Occupy Wall Street is the first mass movement I can remember for a very long time that is actually challenging the entire system upon which industrial civilization and the unsustainable consumer culture of endless growth is built.
Another reporter asked me if I thought OWS has peaked.  "It hasn't even started," I answered.  "The economy is going to continue to fail because it's based on robbing the future, so this movement is going to keep going until this experiment in Empire is finished."

Yet another reporter asked me if I had any message for Romney.  "Not really," I said.  There is no converting people like him.  I'm here because I want to encourage the 99% to understand that we really outnumber people like Romney, and the only reason the banks and the corporations can get away with being dictators is because we let them."
Posted by Gail Zawacki at 3:49 PM