Last night I woke from a dream about fishing...and I knew immediately why. 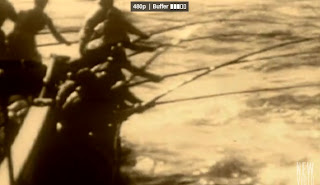 I had seen a brief, grainy, black-and-white flashback in "The Corporation" (58 minutes in, if you want to watch) from some unspecified date but no doubt at least half a century ago or more, of a long boat lined with men standing precariously on a narrow ledge, casting with poles and hooks into the rippling sea. 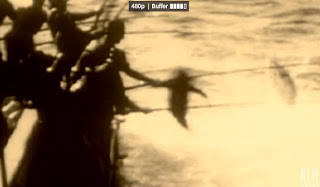 Over and over they yanked the poles high and flipped the writhing, silver fish soaring over and above their heads into the boat, where other men swiftly undid the hooks, which were then tossed back again. 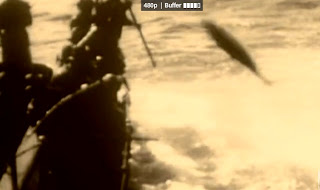 Just as quick as they could snap the swaying rods back into position, they hooked another fish. 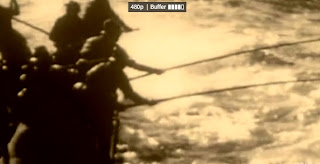 It must have been exhausting but what was even more astounding was the seeming endless, churning wealth of life that must have existed just under the water's surface for them to collect it so vigorously and instantaneously. 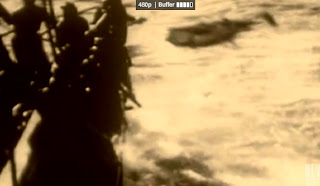 This was the old-fashioned way for fishermen to plunder the sea.  Captions for the photos of their modern contemporaries that follow can be seen at the UK Guardian gallery Oceans2012. 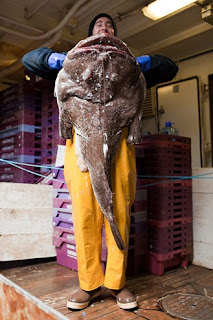 That clip reminded me of when I was growing up, and my dad would take us out in our little Boston whaler, moored on the brackish Ipswich River across from the last remaining ship-building yard still producing traditional wooden lobster boats. 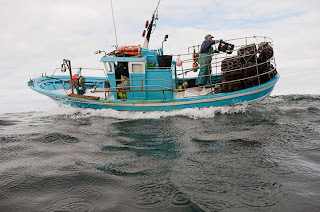 Whenever the tide was high enough to lift our rickety dock above the sticky mudflats, we put-putted downstream, winding along flat miles of channels through briny salt marsh past huge flocks of birds, eventually to emerge in the blue bay.  There we might anchor over the kelp beds and haul in cod or flounder until our arms ached while my dad beheaded and gutted the fish, tossing the innards overboard, until we were too tired to pull in more - or the coolers were full - and then we would head home where my mother would freeze filets for the winter - after she fried some up for supper. 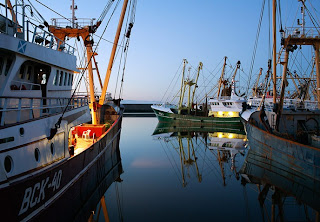 If we trawled along the beach when the mackerel or striped bass were running instead, my dad would usually grill it.

There was another scene in the movie that triggered my dream, and that was an interview with Michael Moore. 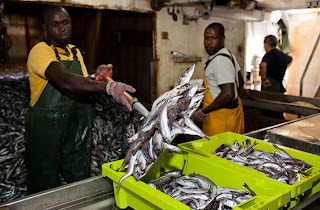 He was speaking in the context of blaming multinational corporations for their many evils, such as their little known complicity with Nazi Germany...and the irony of people at Columbine who worked for Lockheed Martin building weapons of mass destruction, who then suffered the famous tragedy to their own children. 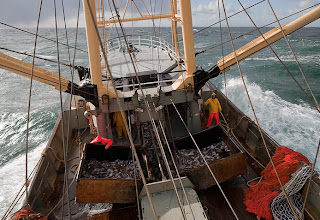 He reflected with evident shame that as a resident of Flint, Michigan, where just about everybody is dependent on the manufacture of cars in one way or another, it had never occurred to him or anyone he knew to reflect on their own personal contribution to the destruction of earth's benevolent climate, the stability of which has enabled humans to create agriculture, to multiply, and to develop civilization.

When I have recalled that the fish disappeared from Ipswich Bay I have always thought bitterly of the Japanese and Russian factory ships whose outlines we could dimly see, perched far off on the very edge of the horizon, from the vantage of our little boat. 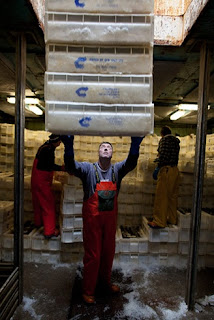 My father described many times the destructive process of their industrial dredging and predicted, accurately, that the fish would disappear in time.  That has long since come to pass and now I too am discomfited from my own contribution to its depletion. 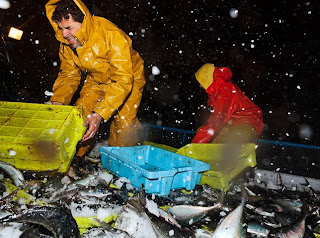 Michael Moore said of himself and his wife, "There isn’t a single one of us, back in Flint—any of us, including us—who ever stopped to think, this thing we do for a living, the building of automobiles, is probably the single biggest reason why the polar ice caps are going to melt and end civilization as we know it." 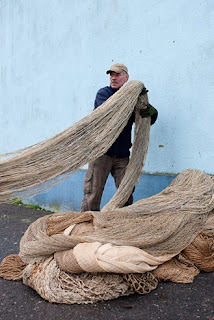 "There’s no connect between, 'I’m just an assembler on an assembly line, building a car, which is good for people, and society, it moves them around.' But never stop to think about the larger picture, and the larger responsibility, of what we’re doing."
"Ultimately, we have to, as individuals, accept responsibility for our collective action and the larger harm that it causes...in our world."
Like this lady - we are all just ordinary people who rarely see our role in the grand scheme of destruction and even when we do, it's difficult to understand exactly how to change it. 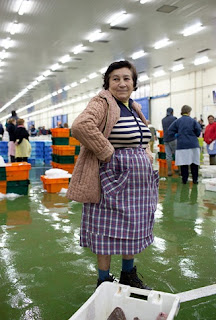 So when, first thing this morning, I saw the headline of this BBC article, "World's Oceans in Shocking Decline", it immediately brought forth my dream and all the questions it raised about how to be sustainable, or whether that is even possible, and even if it were, whether our ecosystem is well ruined beyond recovery.  A team of experts assembled by the International Programme on the State of the Ocean will release a report this week that summarizes (quoted passages in lavender) in a fashion that precludes the usual accusation that scientists aren't being forthcoming enough in their warnings: 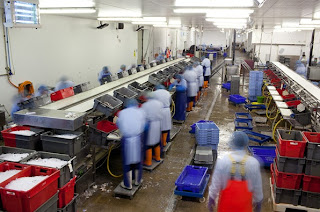 "...ocean life is 'at high risk of entering a phase of extinction of marine species unprecedented in human history"'.
They conclude that issues such as over-fishing, pollution and climate change are acting together in ways that have not previously been recognized.
The impacts, they say, are already affecting humanity." 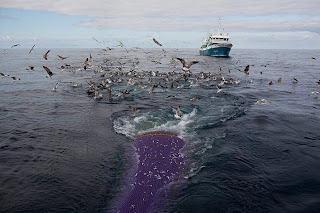 "As we considered the cumulative effect of what humankind does to the oceans, the implications became far worse than we had individually realized." 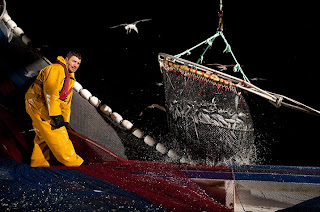 "We've sat in one forum and spoken to each other about what we're seeing, and we've ended up with a picture showing that almost right across the board we're seeing changes that are happening faster than we'd thought, or in ways that we didn't expect to see for hundreds of years."
These "accelerated" changes include melting of the Greenland and Antarctic ice sheets, sea level rise, and release of methane trapped in the sea bed. 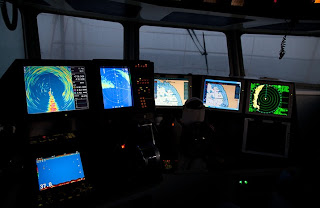 "The rate of change is vastly exceeding what we were expecting even a couple of years ago," said Ove Hoegh-Guldberg, a coral specialist from the University of Queensland in Australia.
But more worrying than this, the team noted, are the ways in which different issues act synergistically to increase threats to marine life.

"So if you look at almost everything, whether it's fisheries in temperate zones or coral reefs or Arctic sea ice, all of this is undergoing changes, but at a much faster rate than we had thought." 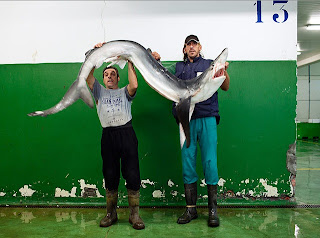 Some pollutants, for example, stick to the surfaces of tiny plastic particles that are now found in the ocean bed.
This increases the amounts of these pollutants that are consumed by bottom-feeding fish.
Plastic particles also assist the transport of algae from place to place, increasing the occurrence of toxic algal blooms - which are also caused by the influx of nutrient-rich pollution from agricultural land.
In a wider sense, ocean acidification, warming, local pollution and overfishing are acting together to increase the threat to coral reefs - so much so that three-quarters of the world's reefs are at risk of severe decline. 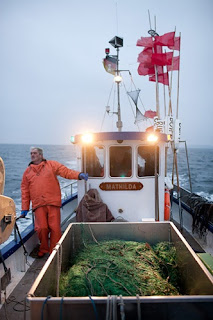 Life on Earth has gone through five "mass extinction events" caused by events such as asteroid impacts; and it is often said that humanity's combined impact is causing a sixth such event.
The IPSO report concludes that it is too early to say definitively.
But the trends are such that it is likely to happen, they say - and far faster than any of the previous five.
"What we're seeing at the moment is unprecedented in the fossil record - the environmental changes are much more rapid," Professor Rogers told BBC News.
"We've still got most of the world's biodiversity, but the actual rate of extinction is much higher [than in past events] - and what we face is certainly a globally significant extinction event." 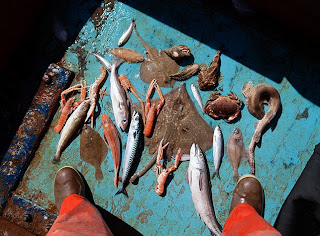 This unrelenting, synergistic traipse to a mass obliteration of biodiversity is identical to the situation on land.  We are just starting to comprehend the degree to which we have degraded the oceans - people forget how the ocean was not long ago teeming with life that far eclipses what remains now.  Sometimes when I leave comments at different articles about our dwindling trees and wildlife I receive indignant responses about how there are still plenty of trees and squirrels.  These are from people who are too young or who have forgotten a world that hummed with life...with colors and sounds and smells that are just fading away.  Following are just a few shots taken quickly this afternoon by Peapack pond, that illustrate the furtive, surreptitious mutilation afflicting the trees whose defenses are impaired from years of absorbing toxic air pollution as they photosynthesize.  It is as though we have forced them to smoke for decades, and now, surprise surprise, they have cancer. 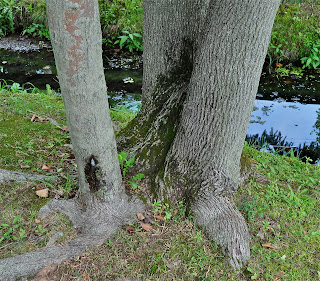 This cluster of trunks are maples - the youngest on the left could have grown from a shoot, or a seed that embedded next to the older tree. 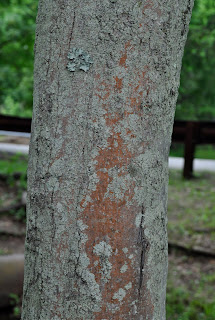 The bark is exceedingly peculiar.  It has a smooth red base, which is covered with crusty growths, and cracks, one of which is bubbling a nasty foamy excretion. 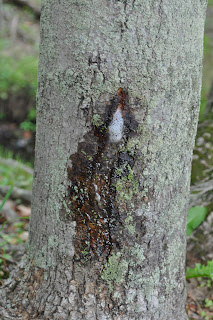 The center of this sycamore trunk looks more like what they were once so renowned for - a dappled jigsaw puzzle of smooth, flat layers of endlessly varied subtle hues of mottled greys, rusts, greens, blues, and creamy white that reflects low pink light in the early mornings and at sunset. 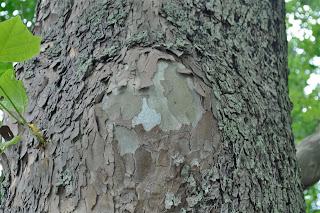 But that remaining patch is being subsumed by what is corroding the sycamore bark everywhere, worsening every season until it is unrecognizable - coarse, rough, splitting chunks of uniform grey. 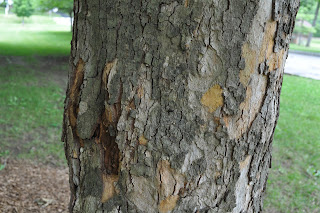 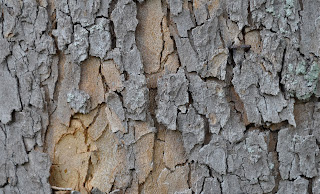 There are scarcely any full-sized leaves, many are missing, stunted in size, or brown. 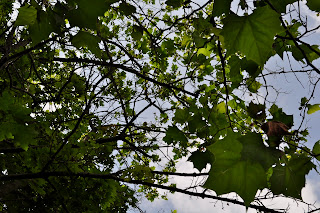 Season after season, they have been defoliated, unable to defend against fungal attacks, and the energy lost in producing a second set of leaves every year is catching up with them. 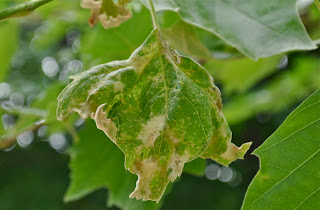 Many people do not notice yet, but any remaining illusion of serenity will soon be forever oceans away. 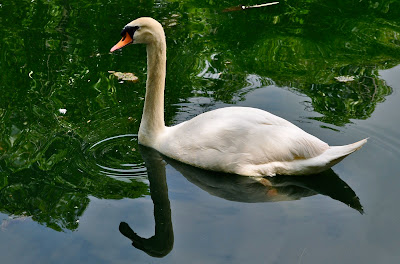 And now because I like it, this post will end, given her kind permission, with a poem written by Desert Dreamer, who writes in a place far removed from Wit's End but cares about much the same things:

I am not the woman
You see standing here.

I am the woman with wild hair
Dancing with souls
Of forgotten flowers.

I am completely human
Alive, real and wild
No longer tamed
Isolated
Domesticated
or restrained.

I am free
Belonging only to the
Garden of the earth.

To look in my eyes
Is to face your self.

I am the sunshine
Touching your bare skin.
Posted by Gail Zawacki at 11:08 PM