Over the many years I have lived in Oldwick I have felt so fortunate to also be able to travel to myriad and wondrous places. Not everywhere I'd like - Costa Rica and Greece for instance. But I have been to England several times, and France, and Italy and Portugal, and various islands in the Caribbean, and Seattle and Vancouver, and Zion and Bryce Canyon National Parks. And of course, back to Crane's Beach in Ipswich many times. 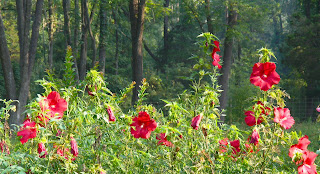 (And yes, I am acutely and painfully aware of how my pre-enlightenment travels have contributed to our impending climate catastrophe.)

Yet every time when I returned here, no matter how fantastic vacation had been, I always was so deeply grateful, and peaceful, and full of delight as soon as I turned the corner onto the narrow dirt lane that leads to Wit's End. Passing the fields and old farmhouses on the way to this little idyllic corner of the earth has always delighted me, and I have always been so eager to get home, unpack and settle back into life in the country.

But now, not so much. I was gone less than a week and I can hardly believe how things have deteriorated, even though I could predict it, having already seen it day to day before leaving.

But first, a few pictures from a tree in Wellfleet. 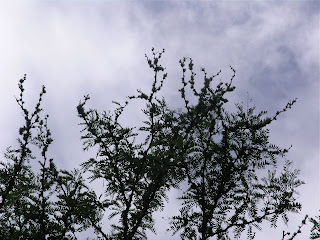 This is the same fuzzy parasite I first noticed on an oak in Newport. This tree, some kind of locust, appears to have leaves but upon closer inspection many branches are actually covered with the growth. 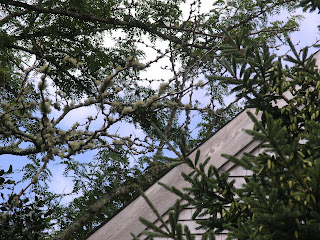 I have no idea what this stuff is, but I expect to become much more familiar with it than I would rather be, soon. 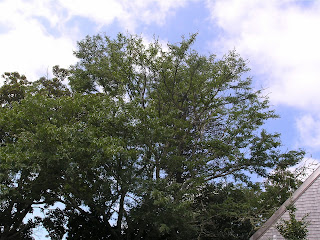 When I got home I made a quick stop at the bank, and what was across the street, but an apparition that is becoming very common. 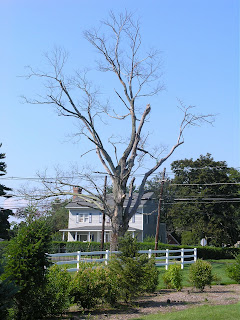 But on to Wit's End. The flowering apricot is badly shriveled, as is the redbud. 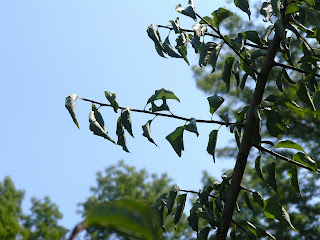 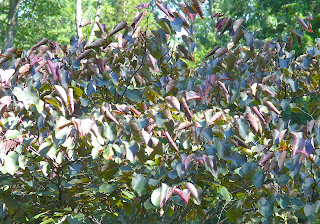 This willow is just plain dead. 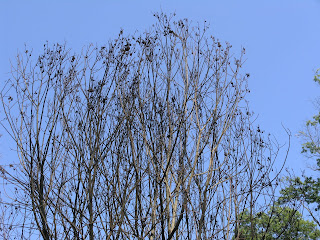 A vigorous, almost indestructible groundcover, snow-on-the-mountain, is not immune. 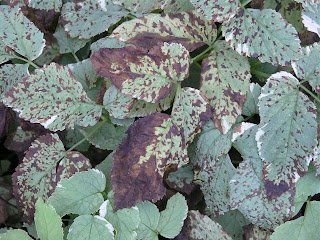 This peony leaf is showing the identical signs of inability to process chlorophyl. 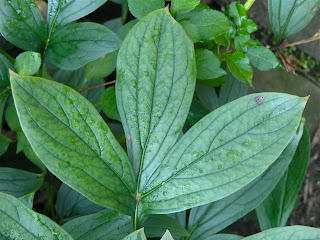 The hydrangea couldn't be more bleak. 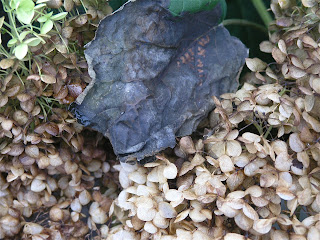 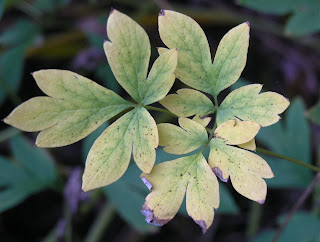 I planted several silky dogwoods, a native understory shrub, around the same time, and though they appeared robust in the spring they are rapidly losing vigor. 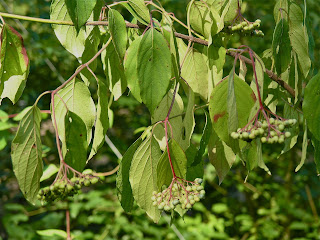 This squash leaf shows the distinct signs of losing the ability to make chlorophyl, something I never saw until this year. 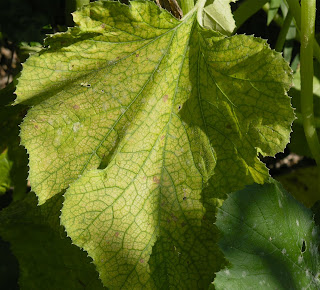 Here is a series of comparisons from pictures I took on July 27, and now, August 16. This catalpa was already droopy. 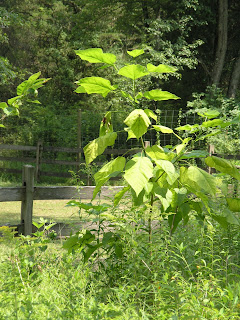 But now its leaves are much more yellowed. 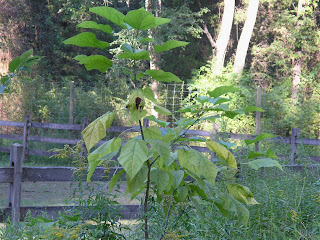 This row of baby lilacs along the chicken pen was planted two years ago. Compare this lilac from July 26... 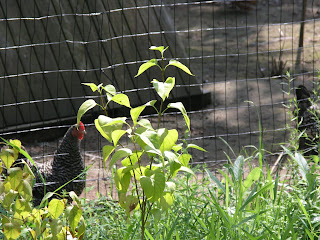 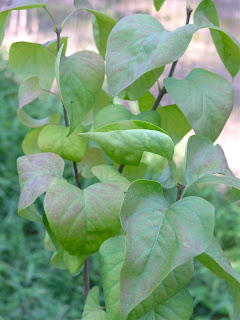 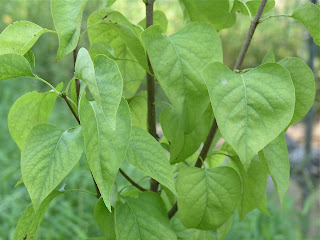 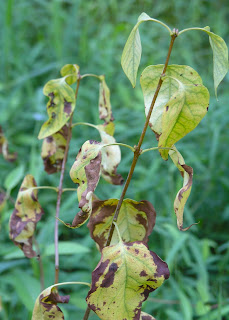 These Japanese Maple leaves that filled me with despair on July 26th... 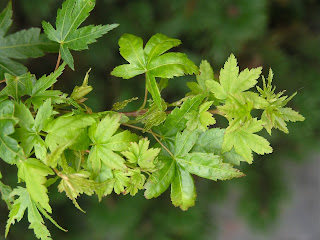 Have gone from pale stunted growth to brown and dead. 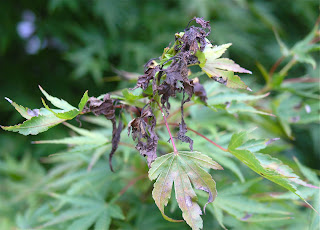 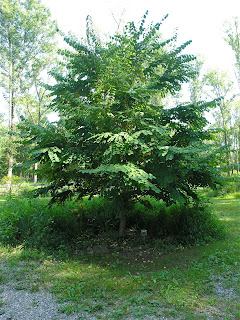 But the saddest thing for me, is to see the decline of a Katsura tree I planted several years ago, in honor of Steve, aka heartmeister, because the leaves are shaped like hearts. I had to admit to first daughter that it looked to be growing and thriving pretty well, just a couple of weeks ago. So it was terrible to come home and notice that the leaves inside are suddenly turning yellow. 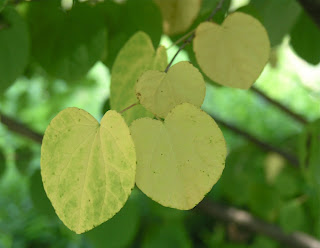 And they are falling on the mulch beneath the branches. 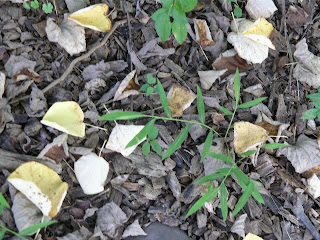 Below is a link to a blog post about a scientific study that reinforces my impression ever since I have been pondering the lack of information about drought, that the TYPE of precipitation is crucial. As far as I've been able to determine, the powers that be who keep track of precipitation only monitor total amount, and measure the levels of reservoirs. But this is not sufficient to determine whether vegetation is getting the right kind of precipitation - slower, longer and more gentle rains vs. harder, less frequent, heavier rains that tend to produce floods.

Notice in this movie they mention warming as the cause of rhubarb dying. But my rhubarb is dying too, it looks exactly like the leaves in the film. And I'm north of his zone. Wake up people!!! It's the emissions going berserk in our atmosphere, duh!!!

And lastly, could it be any more stark than this headline?