Fallen Leaves That Jewel the Ground

This fall, there have been just enough bright colors to serve as a cruel reminder that I will never again see a sight as deliriously sublime as the pond in Peapack when I saw it, in 2010.
Five years since then (less four days) and the inexorable, accelerating decline of trees presents us with ever more fading of the former glory that was autumn. 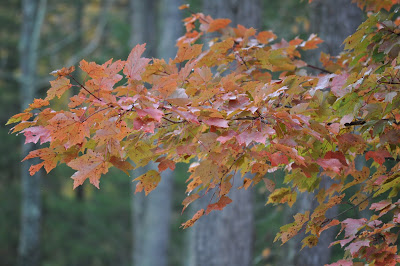 Even leaves on the brightest maples are damaged, pale ghosts of what should be flaming scarlet. 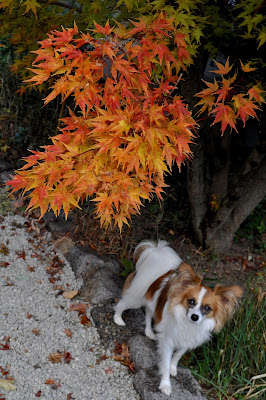 I can find a few bright areas, but right next to a spray of fiery leaves on the same tree are too many shriveled, burnt branches. 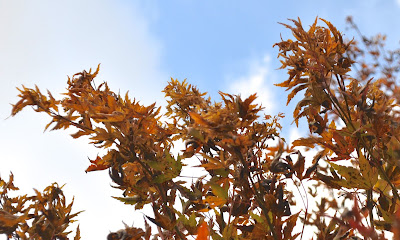 Even worse, many more leaves, like these honey locust, have remained obdurately green as of today. 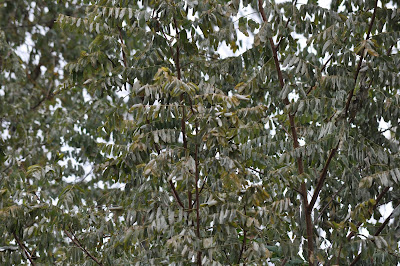 They have become limp, turning grey or brown, and then fall onto the ground without even the feeblest nod to the vibrant colors we expect in autumn. 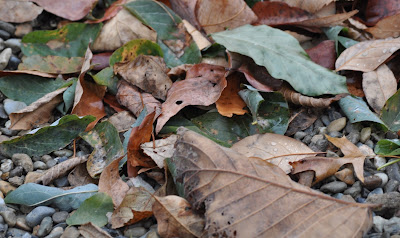 I planted this katsura in front of the chicken coup about fifteen years ago.  It started as little more than a twig and it's now at least 30 feet high. 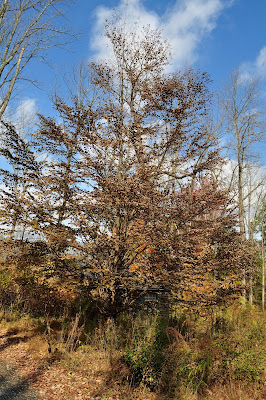 Every fall for at least five years it has been shedding leaves early - turning yellow even in the summer.  But this year, they didn't even get that far.  They just turned brown. 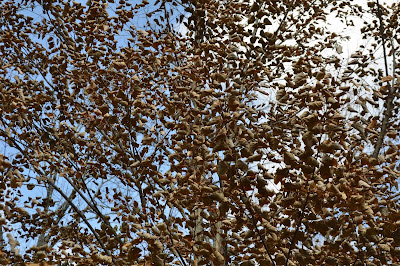 One author wrote, in 2011, of his first discovery of the katsura, "...the aroma originated at a beautifully shaped tree with magnificent apricot-yellow foliage".  Although the lollipop scent if anything is even more pungent than usual, leaves on the entire crown of the kasura are leathery and dessicated. 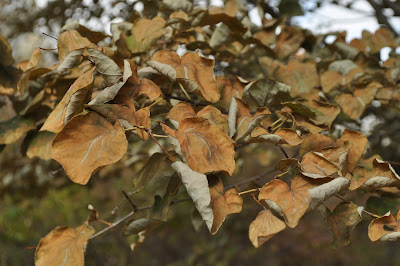 They will not be turning "magnificent apricot-yellow" ever again.  Interestingly, the smell is supposed to occur only in fall as the leaves reach the end of their life cycle, stop photosynthesizing, and produce maltol, a sugar - but I can smell it all summer long. 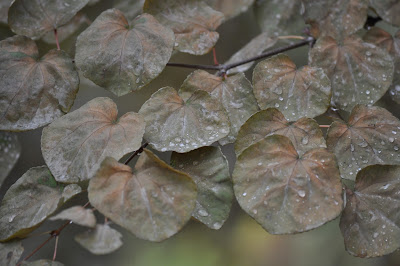 And so too the redbud, a larger heart-shaped leaf, which shows no sign of ever displaying the contrasting purplish and orange hues it is known for. 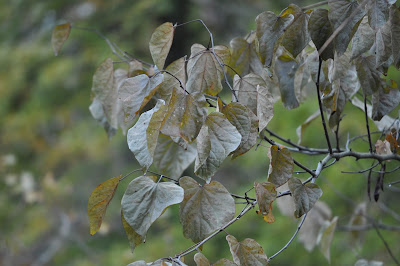 Ironically, these two species both made the top ten list of fall plantings for bright color in This Old House Magazine, in an article published at least five years ago. 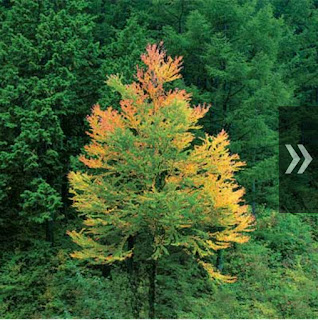 Not any more, unfortunately. 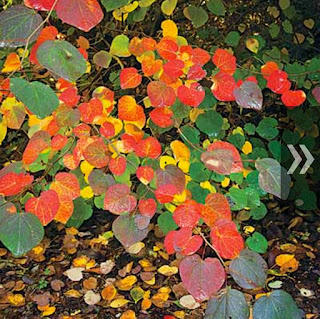 Following are the haunting lyrics from the Incredible String Band's October Song.  You can listen to the recording after a collection photos, which will be followed by the latest futile letter to the scientists.

I'll sing you this October song
Oh, there is no song before it
The words and tune are none of my own
For my joys and sorrows bore it

I met a man whose name was Time
And he said, "I must be going
But just how long ago that was
I have no way of knowing

Sometimes I want to murder time
Sometimes when my heart's aching
But mostly I just stroll along
The path that he is taking.

The other day I was stopped in the car at a red light, and someone in the vehicle next to me was listening to music so loud that I could feel it throbbing through both our closed windows.  It was some pop music that I couldn't name but recognized as silly, but happy.  I thought about how I rarely listen to music anymore, though it was once a joyful part of my life.

In fact, I avoid anything that triggers happy emotions.

Raw happy feelings bring up so much regret and grief in their wake, that I guess that, without deliberate intention, I have become practiced at numbness.  Which isn't to excuse it, let alone recommend it.  But the pine trees I see no longer laugh green laughter - they are fried and burnt and bare.  The fallen leaves no longer "...leave with joy their glad gold hearts..In the scarlet shadows lying..." - instead they shrivel up and turn brown and hang limp on the branches, without even the energy to turn color.  They are victims of poisoning that never was imagined in 1966 - when that exquisite ode to autumn was written - and are still almost universally ignored today.

Losing nature is as excruciatingly painful as losing a lover forever.  In that circumstance, it is better to forget than be overwhelmed by regret.  It is too painful to remember being breathless at the deep timbre of his voice on the other end of the phone; recall the anticipatory shivers when his footsteps reverberated late at night as he walked into the house; echo the melting felt at a glancing touch. Similarly, it is safer to push away memories of walking outside marveling at lush gardens full of scented flowers and butterflies, of climbing mountain trails through cool shady forests luxurious with ferns, of digging toes into gritty clean sand on a beach that smells of briney clean abundance in the sea.

My heart is constantly aching, wanting to Murder Time -  but there is nothing left but to stroll along.

I recently learned via a friend on FaceBook that there is a fabulous view to be found from the top of Bowman's Tower, a commemorative structure built in the 1930s in Washington Crossing State Park, located in New Hope, PA.  This past Friday was clear and sunny, so I decided to take the stairs to the top where I could record the condition of the trees.  I was reasonably confident that I would be able to find pictures from past seasons for comparison on the web, since it is a popular spot for tourists. 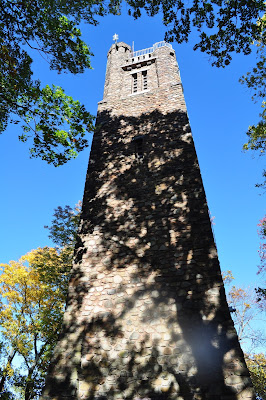 Sure enough, I later found lots of pictures and was able to match them approximately to mine.  This photo was taken on October 25, 2010:
Compare those vibrant colors to the empty crowns and dull foliage of October 23, 2015. 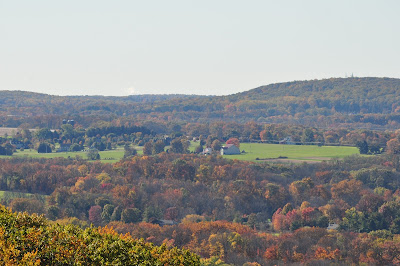 A staggering percentage of trees completely lost their leaves weeks ahead of normal. 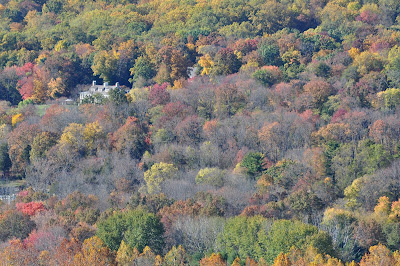 This photo was undated, but was published in March of 2009, so it had to have been taken no later than the autum of 2008.
Here is what it looks like now, when it should be peak color: 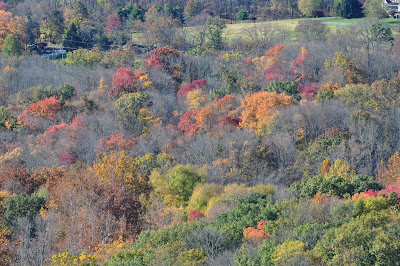 I don't know when this photo was taken, but I do know it will never look like this again...
Because already the leaves are falling off, going from green to brown, before they ever turn those bright hues: 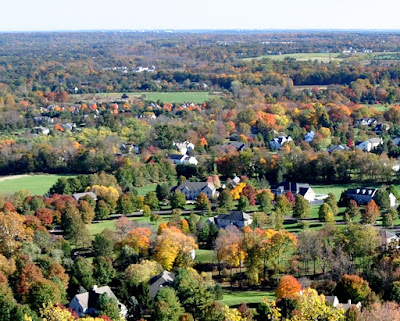 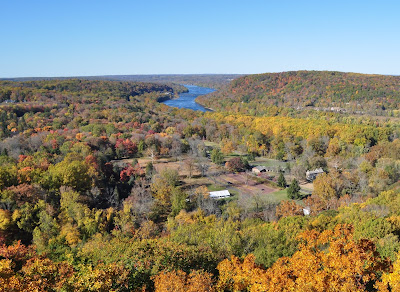 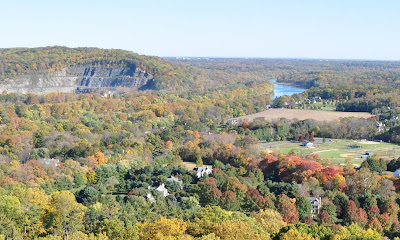 This photo was featured as Bucks County Fall Photo of the week in November, 2011:
In the intervening years the view has become more and more drab, earlier and earlier in the season, as shown in my picture from the 24th: 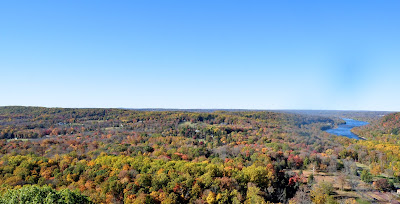 Does it look the same?  It's not!  Zoom in - today, almost half the branches are already bare. 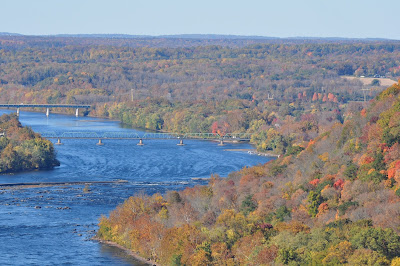 From the tower, far below, it is possible to see the historic Thompson-Neely House, which is part of the park and open to the public for tours.  It retains the original pre-Revolutionary wide board floors, beautiful hand-made moldings, and of course the iconic stonework. 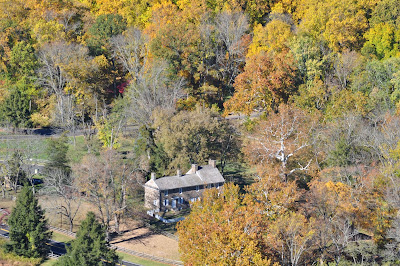 I decided to visit it, as long as I was there, and discovered to my non-surprise that it doesn't retain many of the trees that once graced the property.  There are stumps everywhere. 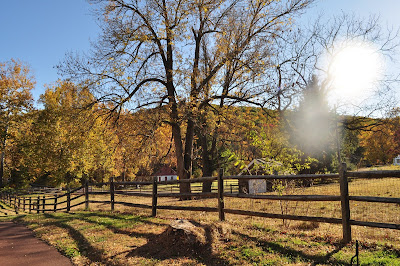 This is an earlier, undated photo which shows a large tree in front of the house, with a tall sycamore beyond.
Here's another view of it from days gone by. 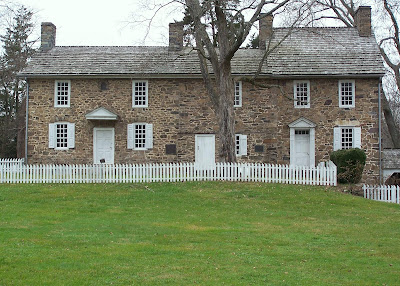 Well, that tree is no longer there. 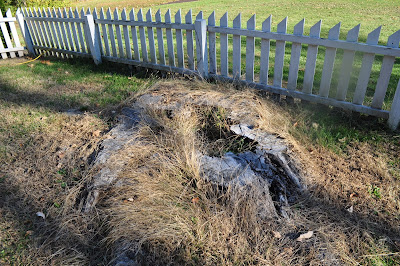 And the sycamore is rotting inside, as evidenced by a gaping hole in the trunk. 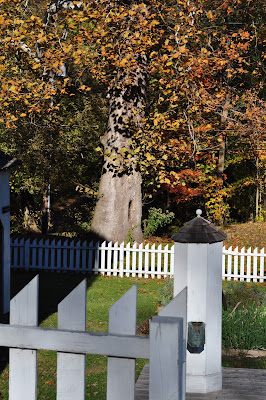 Here's the content of my latest missive to the following scientists:


Dear Authors and Editors,
I am writing in reference to the following papers you have published:
“On underestimation of global vulnerability to tree mortality and forest die-off from hotter drought in the Anthropocene” in the ESA journal Ecosphere; “A global overview of drought and heat-induced tree mortality reveals emerging climate change risks for forests”, in Forest Ecology and Management.

I am concerned that the emphasis on drought from climate change (although I do not dispute climate change or its ultimate impact on forests) is neglecting a crucial factor in forest decline.  The contribution of tropospheric ozone and related excess nitrogen deposition could explain why tree mortality and forest die-off corrolated with drought and climate has been "underestimated".

The role of pollution is critical for two reasons.

First, as vegetation dies off, less CO2 will be absorbed, thus accelerating all the effects of climate change.

Second, if the underlying influence of ozone is not addressed, there will not be migration of species in response to climate change, there will be mostly extinction.

Research about the impact of ozone on plants has been conducted for decades.  Given the pernicious damage from ozone, the background level of which is inexorably increasing around the world, it would be surprising if forests weren't dying off, with attendant wildfires and landslides as a result.

I would be delighted to hear back from any of you with your thoughts.  I have many, many more links to research in substantiation - following are a small sample.  Another summary with more corroberation can be found on my blog, Wit's End.   Thank you so much for reading.

1.  When they absorb ozone, plants and especially long-lived species such as trees first lost root mass, making them more vulnerable to drought and wind.  See attached photo of a controlled fumigation experiment from ozoneinjury.org - left, filtered air, center, ambient polluted air, right, elevated ozone.  And that difference is from just one season.  The US EPA has determined that damage is cumulative.

3.  Precursors to ozone circumnavigate the globe so that even remote places have injurious levels of background ozone.  The Southern Hemisphere is also encountering high levels due to agricultural burning and wildfires.  See Dr. Jack Fishman's lecture to the Max Plank Institute "Are We Creating a Toxic Atmosphere?".
https://www.youtube.com/watch?v=n_gw5gKJtGM
Rapid Southern Hemisphere Pollution:  http://www.atmos-chem-phys.net/14/9855/2014/acp-14-9855-2014.html

4.  Trees are dying in areas that are not drier, but are wetter or within natural variation.  A focus on western US and other areas of drought misses the equally dramatic death of forest on the East Coast, in the UK and the tropics.
http://www.life.illinois.edu/dietze/manuscripts/DietzeGCB2011.pdf
UK Tidal wave of pathogens:  http://www.theguardian.com/environment/2012/nov/02/ash-tree-disease-10-years

5. Crops and nursery trees and even tropical ornamentals in pots that are being watered are also suffering damage.  Trees at their northern range of habitat are dying just as fast as those at the southern range.  See this article about sugar maple decline which scientists cannot explain by acid rain or climate change:
http://phys.org/news/2015-10-alarm-sugar-maple-adirondacks.html
The issue has been known for years but has been swept under the rug:
http://www.nytimes.com/1987/10/26/us/dying-forests-perplex-us-and-w-germany.html

7.  The Permian-Triassic extinction (265 mya), the worst of the past big five and the only one in which trees and insects died off significantly, is a closer analog to the current 6th extinction, which is usually compared to climate change in the PETM event (65 mya).  The earlier extinction also was precipitated by massive poisoning of plants, from erupting traps, leading to the same spread of fungus/algae (rampant lichen) that can be seen today.  Now, humans are erupting prodigious amounts of toxic aerosols.
http://geology.gsapubs.org/content/39/9/883.abstract  and http://geology.gsapubs.org/content/43/2/159.abstract

8.  There isn't a place on earth that isn't experiencing tree dieoff.  Examples are as plentiful as places and tree species.  A few:
https://theconversation.com/death-of-a-landscape-why-have-thousands-of-trees-dropped-dead-in-new-south-wales-48657
Connecticut: http://summitcountyvoice.com/2012/08/08/global-warming-diseased-trees-may-be-major-methane-source/
SoCal:  http://www.latimes.com/science/la-sci-beetle-trees-20140530-story.html#page=1
http://motherboard.vice.com/en_au/read/every-forest-biome-on-earth-is-actively-dying-right-now

9.  Pollution both interferes with rain directly, and indirectly as it injures foliage and reduces tree evapotranspiration.  Thus drought is as much a result of tree damage as a cause.
http://www.sciencedaily.com/releases/2000/03/000314065455.htm
http://scienceheathen.com/2015/01/05/desertification-effects-causes-examples-top-10-list/

10.  Ozone both reduces the scent of flowers and the ability of pollinators to detect the scent, resulting in impaired reproduction of plants.
http://onlinelibrary.wiley.com/doi/10.1111/nph.13620/abstract 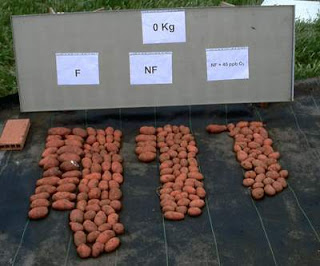