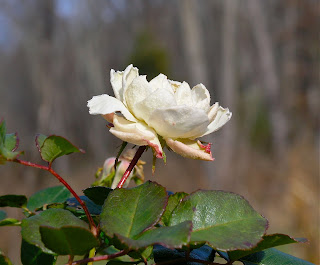 The Essex Fox Hounds took off from a neighboring farm. 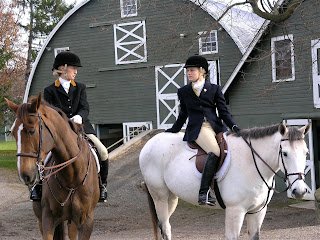 These lovely young ladies wait while the field assembles. 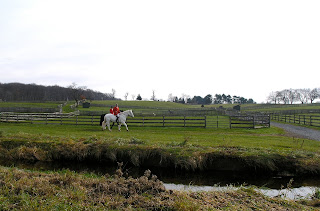 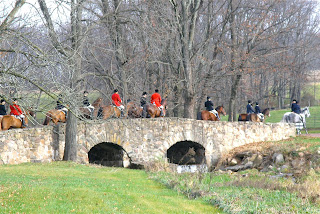 When I got home I found a pretty yellow butterfly in the back yard, flittering from one dandelion to another. Just days before Thanksgiving! 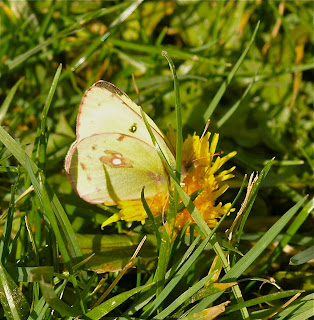 I also saw a tiny bird but I couldn't get a picture of it before it hopped into thick brush. Several times in recent weeks I've noticed really small birds that can't fly, they just sort of jump and flutter but can't take off. I've been wondering if they are sick or underdeveloped. But yesterday I realized they're young - babies. That's a very bad sign. That means that for some reason, the first and maybe even subsequent broods were lost, so the mothers laid more eggs and they're hatching way too late in the season.
Today I am ingesting nothing but water, in support of Climate Justice at Copenhagen, as a member of Greenfyre's "Hungry for Climate Justice" rolling fast. Information about the international fast movement is here.
So when I woke this morning, I made up a batch of carbonated water, which I love, in one of life's many ironies. I used to buy cases of bubbly mineral water imported from France or Italy, and spent a lot of time recycling all the bottles. Then I discovered I can make it myself, with my own tap water. I have very delicious water, from a well. Of course, somewhere a mountain is being blown up, and coal is being burned, to power the pump...Once you start thinking this way, it's a slippery slope to despair. I don't recommend it!
So, the only recourse is to take what steps you can. I saved up a collection of the imported bottles and fill them using a funnel. Once you buy the soda maker, which you can order here, they pick up the spent cartridge and deliver another to your doorstep. No more recycling! If you like flavored sodas, they sell that as well.
The other step I'm taking, which intrigues me, is the YesMen approach, having some fun with protest pranks, here on the deck of the Titanic. Specifically, this challenge:
How can I make a fake newspaper?

You have to collect articles, get them laid out, make some ads, find a printer, wrangle a bunch of distributors, scope out the media outlets you want to get papers to, make a video news release in advance, rent a few trucks or vans, and lie a lot about the number of papers you printed (optional).

It might be easier to start with a flier.

So, I'm redoing my flier and having it printed this week. I'm kind of thinking about handing it out someplace that will get me arrested...Bridgewater Mall? Or maybe go to some corporate office for Exxon, and hand it out there - or a politician's office, like Frelinghuysen? Suggestions welcome!

The winners of each challenge will be "honored" by having their work ripped off and placed on the DVD of The Yes Men Fix the World and shown at a big screening event in March. Groups will also be eligible to submit proposals for possible funding and development in a Yes Men training camp (more info coming soon).

heh, heh.
Here's the text - the pdf from the printer is kind of hard to read:
The science on climate change from rising levels of CO2 is settled. The global average temperature is going up - causing glaciers and icecaps to melt, droughts and desertification, violent storms and flooding, and perhaps most alarmingly, acidification of the oceans. The oceans soak up much of the CO2 produced by coal and oil emissions, - enough to already begin dissolving coral reefs and the shells of sea creatures. Ultimately, this will cause a collapse of the food chain and most life in the oceans will become extinct.

Yes, it's all over but the shouting. But what is neglected in the political debate are the "other" greenhouse gases, and these should be of immediate concern.

Burning fossil and biofuels creates volatile organic compounds that react with UV radiation, leading to the formation of ozone and peroxyacytel nitrates. Just because these compounds, like CO2, are invisible, doesn't mean they aren't lethal, causing cancer, emphysema, and asthma in humans.

Less well known, although well documented, is their cumulative toxic effect on vegetation by interfering with the ability to photosynthesize and produce chlorophyll. Already the trees in New Jersey are in irreversible decline. Without their nuts, fruits, and shelter, all species dependent upon them will die as well.

This past summer it was impossible to find any foliage, including annual crops and aquatic plants, that didn't show the symptoms of damage. This autumn, leaves fell a month earlier than normal, and our conifers are losing needles rapidly.

Since preindustrial times the level of CO2 has risen by about 40%, from 280 to 388 ppm, in response to our burning more than 320 billion tons of carbon. Does that mean it's already too late to avert positive feedbacks leading to catastrophe?

Maybe. But the only moral thing to do is try.