The Vestiges of Fall

Reproduced here are some gorgeous remnants of autumn color - first, leaves from a row of Japanese Maples. 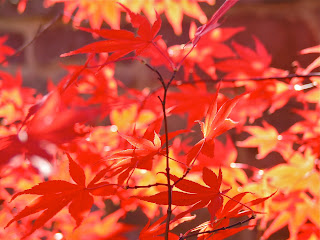 It's important to focus on the lovely bits of nature that still exist, 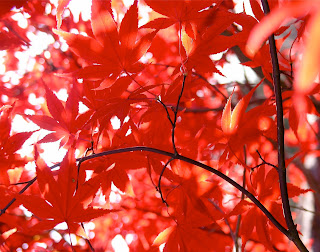 because in general, the landscape is so dreary and ugly, 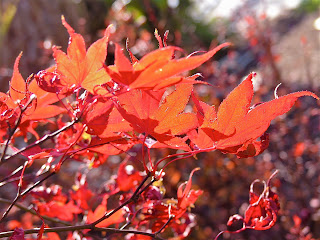 it's difficult to regard with anything but bitterness and grief. 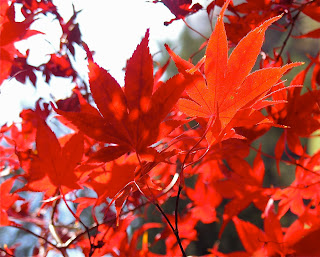 It's odd but only a small percentage of people understand the calamity of climate change... 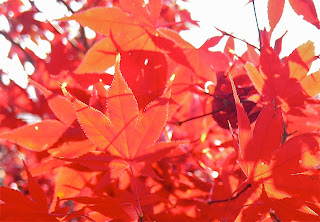 and of those, even fewer understand how imminent it is. 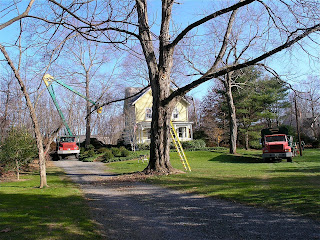 Everywhere, there is futile tree trimming. The flowering pears seem to be the last holdouts when it comes to colorful leaves. 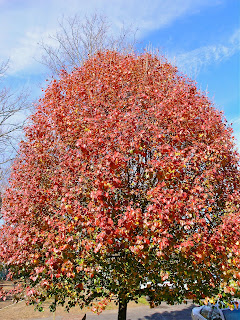 I'm still in favor of a full-out effort to reduce/eliminate emissions, on the slender hope that it will buy us enough time for the brightest among us (that wouldn't be me) to devise some means to reverse the process without creating results worse than the initial problem through unintended consequences. 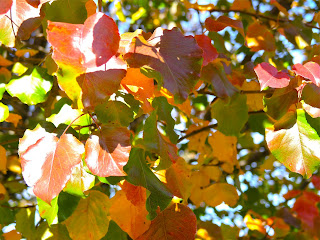 Having said that, from my reading of the science, it's really too late. Heating leads inexorably to more heating, the only question is how quickly. 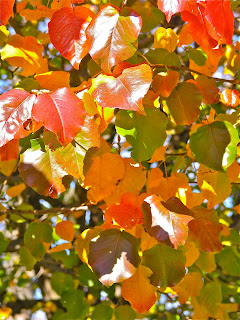 Here is a link to the prediction for catastrophic warming, which is based on CO2 alone - given the accelerating rate of concentration and the likelihood that CO2 sinks, including the ocean, are saturated. 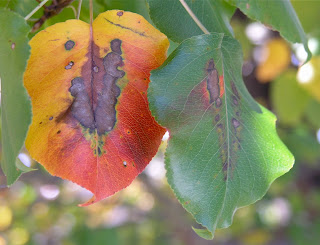 It doesn't even factor in methane, or positive amplifying feedbacks such as the albedo effect, or this study about other greenhouse gases whose effects have been underestimated or even ignored. 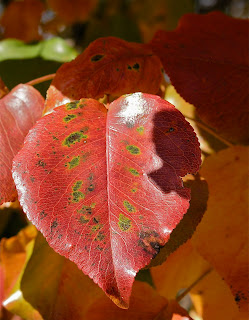 Add to that the influence of the professional deniers, and the unwillingness of most people to even consider a reduction in their pattern of consumption, and the prognosis is bleak. 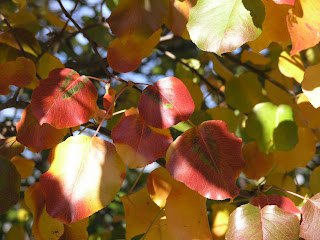 Is the stippled coloration in these leaves evidence of stomata damaged from the other greenhouse gases? I'm not an expert - but it looks like a suspicious pattern to me. 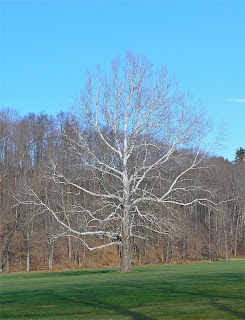 I have always especially loved sycamores, they are my favorite tree. When they grow without close neighbors they have a beautiful pyramidal shape, and the leaves are wide and huge, a lovely shade of light mossy green. The best thing though is the smooth mottled bark, lush warm shades of brown and grey and luminous ivory. For almost 30 years I have admired a stand, on the other side of the Cold Brook, which is spectacular before dusk when the sun is setting and the colors of sunset are brilliantly reflected. What a sight when they look like they are on fire with gold and pink and purple blazing above in the branches and on the trunks, and sparkling in the water below. 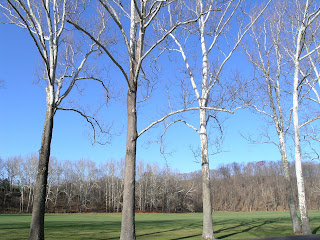 They seem to like growing on the banks of creeks and streams, and there are many of them at Natirar, a park I hadn't visited since July. 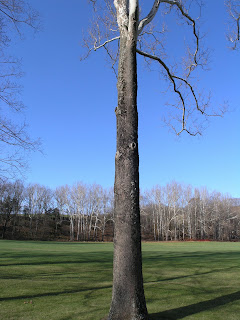 And so it was with great dismay that I discovered the notorious lichen when I went back a couple of days ago. I have never, ever seen lichen on sycamores before. The trunk above is completely covered. 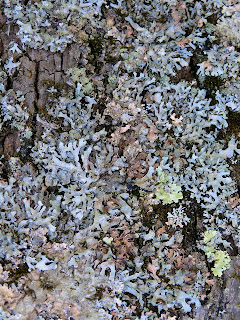 There are more than one kind. 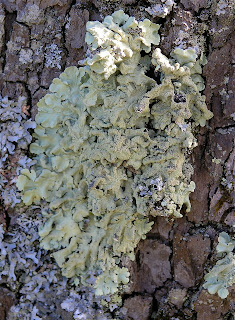 At the base of this tree, there is an impressive cluster. 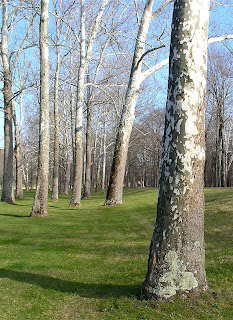 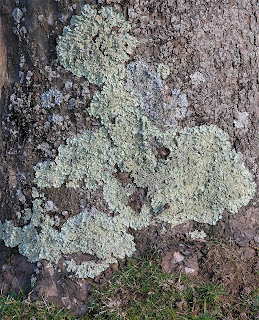 The park is nearly 500 acres - I took this photo of a treeline there on July 28th. Click to enlarge, if you want to see the dead pines. 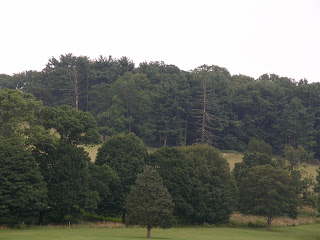 Natirar, so named - in a scintillating burst of daring creativity by Kate Macy Ladd, a Mayflower babe and oil heiress - early in the last century as an ananym for the North Branch of the Raritan River, that flows through the property. 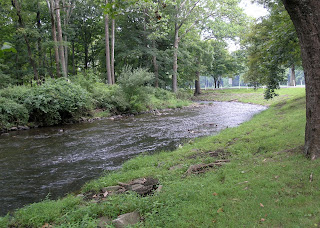 More recently it was owned for decades by the King of Morocco. He purchased the property on the advice of his buddy, Malcolm Forbes, as insurance in case his subjects revolted and he needed a safe haven from a coup. That didn't happen so he never stayed there. 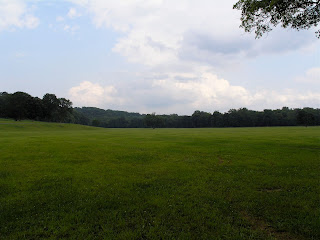 The fields look healthy, but here is a close-up of the tree leaves, last July. 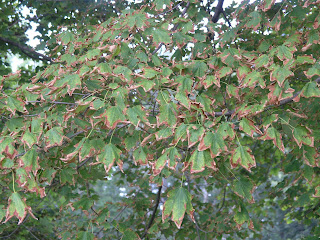 A portion including the mansion has been leased by Richard Branson, who is currently turning it into the pretentiously organic Virgin Spa, where those wealthy enough to indulge in obscenely conspicuous consumption can helicopter in for a facial and massage. 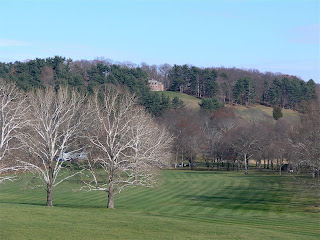 I say mansion loosely, it's an uninspired behemoth with no architecturally redeeming features outside, and the interior has more resembled an abandoned insane asylum - perhaps a setting for One Flew Over The Cuckoo's Nest - than a grand, elegant residence. Richard had his work cut out for him...but have no fear, he will no doubt succeed in turning it into an even more ostentatious monstrosity for the uber-wealthy. The private club, admission to which is granted by invitation, (only masters of the universe need apply), will no doubt be peddling the essential survivaballs in their gift shop - what to give the zillionaire who has everything???I had already seen this report, but when I went to look up the video to embed it here on the blog, I stumbled across this, Sir Richard partners with the Yes Men!!! Oh noes!! The irony of it!!! I was perplexed, mystified and humbled - had I misjudged him????


Oh, and then I realized it's part of "liberate stupid footage" as found here, at the Challenge.Yes Men ...thinking...thinking...
Posted by Gail Zawacki at 7:17 AM