Yesterday, November 3, I had occasion to talk to a professional forester. I asked him to identify a tree that I've had my eye on all summer. I could see from a distance months ago, that it started losing leaves early in the summer, and it just got thinner and thinner. It's quite a large tree, with a spreading habit unlike the prevalent trees in that area - tulip poplars with their columnar stance, or the horizontal branching of the beech - so I surmised it was an oak.

A few weeks ago I took a little walk to check it out and realized it wasn't an oak after all. I was frustrated because I didn't recognize it, and without flowers or seeds or pods, I didn't take the time to try to look it up. It has simple oval leaves, with smooth edges, pointy at the top and bottom - but they don't grow in the habit of the common black walnuts and ash, which have similarly shaped leaves, but are opposite on stems. These are arrayed in an alternating pattern.

By the time I could ask the forester, yesterday, there were almost no leaves left on the branches and he stood there for a few minutes, puzzled, and finally said, it must be a tupelo - a black gum - but it's kind of strange, because they turn bright red in the fall 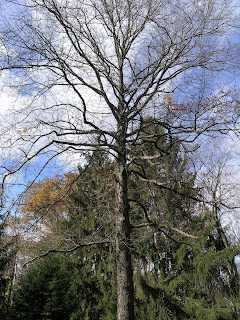 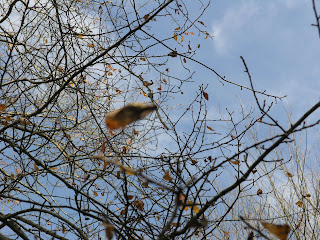 Those few that still clung were yellow, and brown. 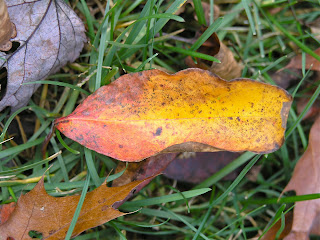 But I did find a few red leaves, that are mottled. 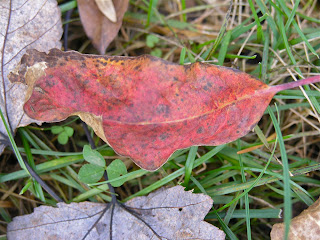 Now, here is what a tupelo looked like in 2008, found on the web here.

The tupelo has a wide range and is known for its brilliant foliage in autumn.

"It's been a strange fall," admitted my forester. We discussed the bizarre lack of colors, and the dropping leaves. "I think it's the pollution," I said.

Just as though I had never mentioned it, he started pointing to some blue spruce and telling me that the reason their branches had no needles was a lack of sun. Riiigghhhhht. 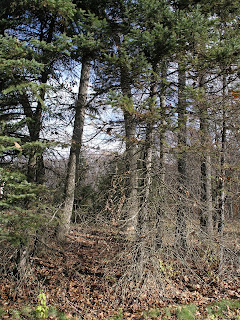 Oops there is that pesky lichen, on the branches that have no needles. 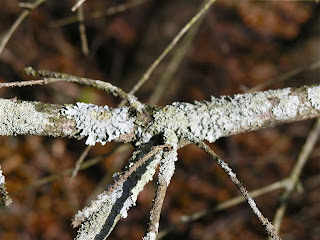 I didn't even bother to point out the spruces situated in the middle of the lawn in full sun that also have bare branches as well - why bother?

Another anecdote - also yesterday, an acquaintance told me that her birthday was the day before, and so she knows from a lifetime that on her birthday the fall color is glorious - until this year.

click on a landscape and it becomes apparent how many trees are bare. 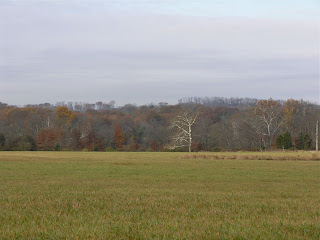 And keep in mind that holdouts like the maple that follows, which still has leaves, only beg the question - what happened to all the others? 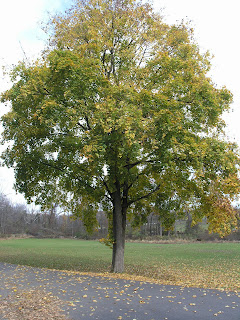 Of course, they aren't scintillating orange and red. 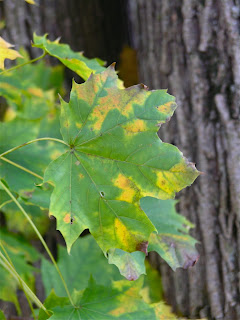 In fact, they are hideously burnt. 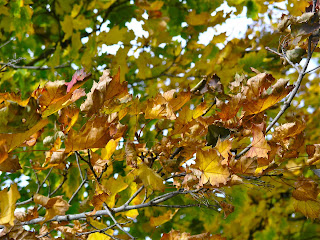 Never mind, click the clicky and you can listen to Van Morrison's song here!

Following is a mind-numbing report about the value - or rather lack thereof - of switching from fossil fuels to biofuels. It's staggering how hugely this market is transforming the use of land, and what net damage it does, when it comes to CO2. What's even more disturbing is the lack of any consideration of the unintended consequences of biofuel emissions, as environmental pollution that is toxic to humans and vegetation. Here's the link to the report and below is an excerpt, that makes me wonder, could just the emissions from ginormous amounts of nitrogen based fertilizer be enough to poison the atmosphere for trees? And why the hell isn't anybody but me asking these questions???

N2O emissions are particularly relevant for crop- based biofuels because of their high contribution to global warming; 1kg of N2O is equivalent to 298 kg of CO2 emissions over a time horizon of 100 years (Solomon et al. 2007), so even small changes in the N2O emissions can significantly affect the overall GHG balance for biofuels.

Because the use of fertilisers and related N balance and N2O emissions are very site-specific, it is difficult to define representative average emission factors. Many LCA studies used the IPCC methodol- ogy for estimating N2O fluxes, which tends to give estimates only somewhat over 1% of the N applied by fertiliser11.

as a whole, 20% of the N applied to agricultural fields leaves in surface and groundwaters, and slightly over 10% is volatilised to the atmosphere (Howarth et al. 2002), which according to IPCC default values results in N2O emissions via atmospheric deposition of 0.1% and via leaching of 0.15%; thus the indirect emissions of about 0.25% would not significantly add to the direct emissions of 1%.

More recently, however, Crutzen et al. (2008), based on the observed global increase of N2O in the at- mosphere, found that the total emissions from fer- tiliser use must be more in the range of 3-5% on average compared to the 1% derived from the de- fault values12 of the IPCC approach. The difference could possibly be explained by denitrification pro- cesses occurring in the water and sediment down- stream of the fields where the fertiliser has been applied, an argument supported by Howarth and Bringezu (2009). If these observations are corrobo- rated, the results of most LCA studies performed on biofuels so far would have to be reconsidered.

You never know what you'll find on the intertubes. Looking up tupelo, I came across this British band called Sikth, who made an album called The Trees Are Dead and Dried Out Wait for Something Wild, with a song called Tupelo. Following are the lyrics. I can't find a recording of it on the web, and probably wouldn't like it. But I am curious!

Tupelo - O!
Oh Tupelo,
Until the king is born in Tupelo...

In a clap board shack with a roof of tin,
Where the rain came down and leaked within.
A young mother frozen on a concrete floor,
With a bottle and a box and a cradle of straw...

Tupelo - O!
Yeah! Yeah!
Hey, Tupelo.
With a bundle and a box and a cradle of straw.

Well, Saturday gives what Sunday steals,
A child is born of his brothers heels.
Come Sunday morning, first born dead,
In a shoe-box tied with a ribbon red...

Tupelo - O!
Yeah, Oh Tupelo!
In a shoebox tied with a ribbon red...