On Saturday there were not one but two Occupy actions in New York City.  The first was a rally and then march from Zuccotti Park to Union Square, to protest suppression of free speech.  Somebody gave me that American Spring sign I'm holding up in the picture, and I carried it aloft all the while we took a circuitous route winding around lower Manhattan, trying to elude the police pressure to stay on the sidewalks.  A number of people expressed the fear of being arrested again -  the crackdown has had some success in that way, but the turnout was good, and spirits were high. 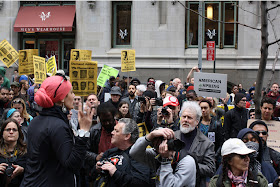 Next (after some challenges trying to figure out the New York city bus system) I finally made it to the United Nations, where veteran Occupiers were conducting a training in civil disobedience for environmentalists, which turned out to be quite fun. The general objective was to strengthen the connection between the economic injustice that Occupy is best known for protesting, and the plundering of Earth by the same corporations and 1%.  It was wonderful to meet other activists who feel as passionately as I do that the ecosystem is in imminent jeopardy, and that OWS is a powerful voice to oppose its destruction.  After the exercise we marched from Dag Hammarskjold Plaza to the UN entrance, to witness the arrests of several people who had dressed up like corporate flacks and occupied the territory.  I expected it to be purely symbolic theatre, but actually, they really did get arrested by the ever-vigilant NYPD, while the rest of us 99% cheered and jeered.

At last I had another opportunity to break out the infamous Koch Kills banner, and found two willing accomplices to help carry it.  The screenshot above is from the online version of the Wall Street Journal (video embedded below), so I can only hope that David Koch sees it and realizes that ordinary people like me - the aging New Jersey housefrau he labeled as "very, very extreme, and very dangerous" (!) - remain deeply committed to exposing the ecocrimes of Koch Industries.

Amazingly enough, I once again ran into Matthew Connors, a professor at MassArt in Boston, who has been compiling a collection of marvelous portraits of occupiers, all of which can be seen at his webpage, which looks like this:

He had with him a print of a picture of me that he had taken last time I was in New York - so, thank you Matthew!! 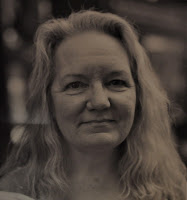 This is video of the action at the UN: