Vacation! We spent the night in Newport, to break up the trip to Cape Cod, and visit one of the palatial "cottages" constructed during the Gilded Age. This trip we found ourselves at "The Elms," which like all of Newport boasts extensive gardens, marked by spectacular ancient tree specimens. 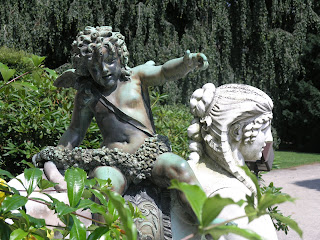 Scroll down to the science, which is mind-boggling, if you don't have time for pictures of a lovely afternoon! 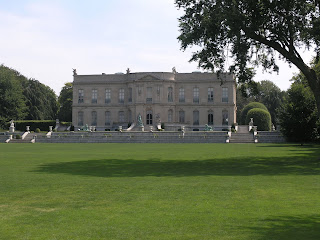 This is actually a cluster of weeping beeches. Click on it to get a sense of scale - Steve, 6'2" is on the left. 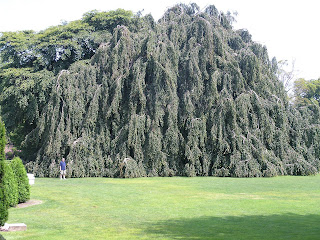 It is magical inside the copse. 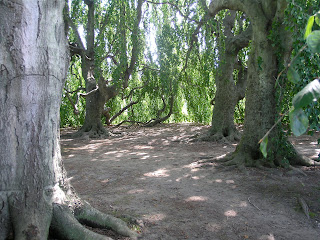 But the leaves portend that these magnificent beeches won't be around much longer. Last September when we visited here, I was worried about the trees, and this year, my worst fears are being realized. 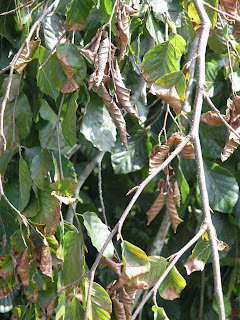 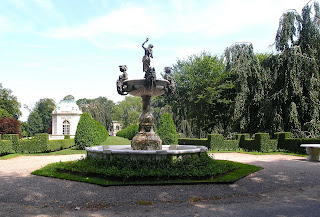 This grouping of Japanese Kwanzan cherries appear to be within the range of normal, until you take a closer look. 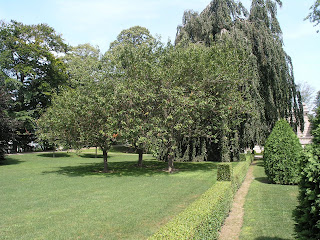 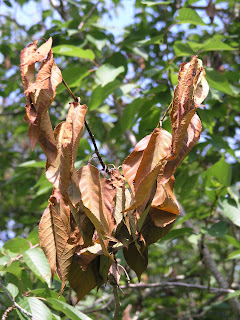 Newport must have dozens of copper beeches, my favorite tree. I love the way the trunks look like wrinkled elephant legs. 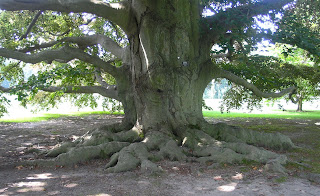 These leaves are showing alarming signs but are better than many others in town. 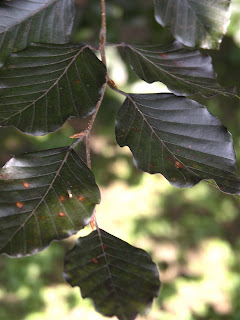 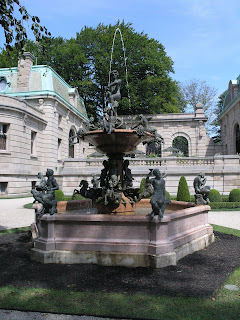 This is a young oak so please don't anybody tell me the trees are dying because they are old. 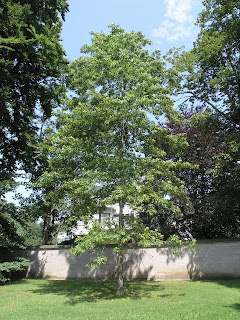 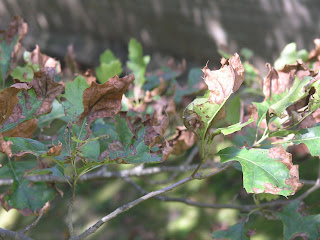 This curious parasite was all over the branches. 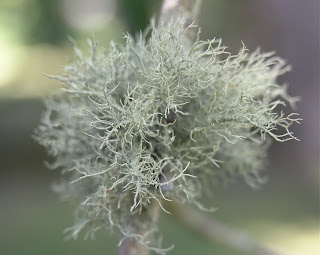 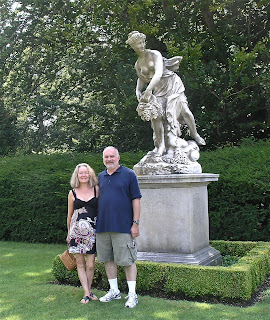 We left The Elms and went across town to the Cliff Walk. Along the way were endless examples of uniformly declining trees. 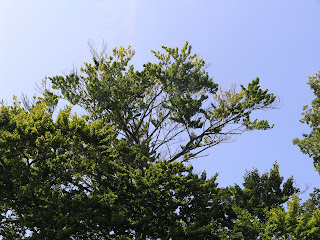 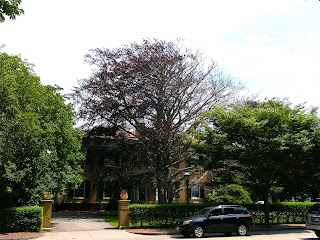 Compare the car at the foot of this copper beech below. The trunk is huge! 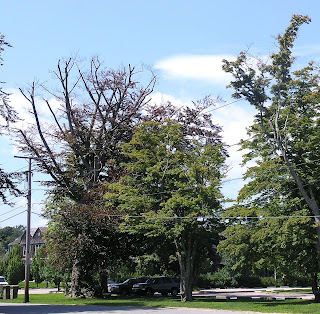 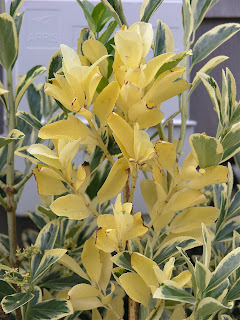 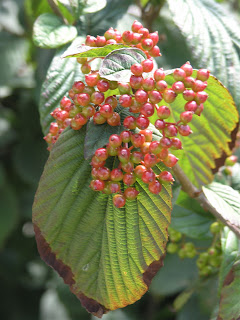 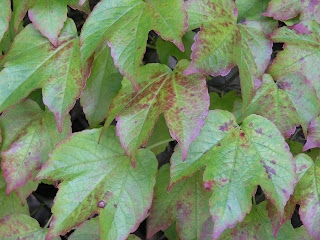 The view from the cliffwalk, and leaves along the way. 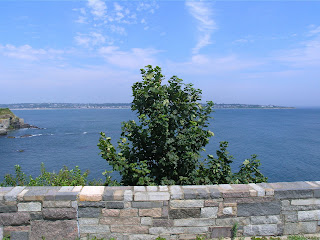 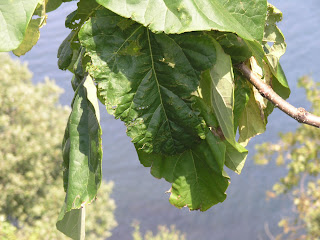 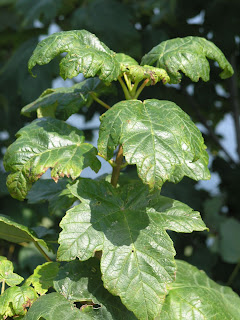 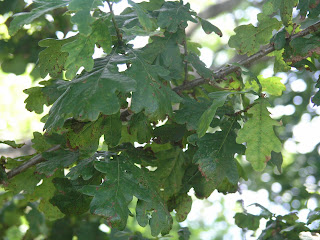 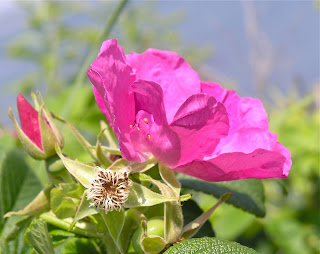 My camera ran out of battery power, so we headed up to Wellfleet in time for dinner, where I recharged it. 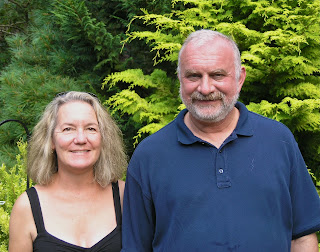 Doc pontificating. Expect more of this as the week goes on. 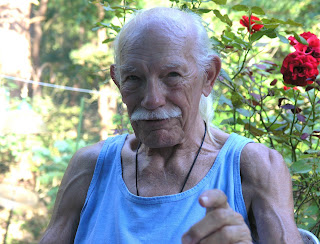 We discovered this way to prepare the famed Wellfleet oysters last summer - it is divine, and so ridiculously easy. Make a mash of butter, minced garlic and parlsey, and anchovy paste. Put a bit on shucked oysters and grill. This is a deceptively simple concoction that you will never forget (anchovies have miraculous powers). It is sublime on lobster too. Get the fishmonger to partially cook the lobster and slice it down the middle. Place each half shell side down on the grill, top with the paste, and cover until done. It doesn't get any better than that! 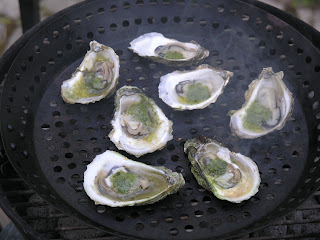 Now, for the important part of this blog post:

On the drive from Newport to Wellfleet, we had a very interesting discussion. Some potentially revelatory aspects to my "investigation" may be emerging, I'm not sure. I am not a chemist and reading so many studies is making my poor brain hurt.

One thing is for sure, there are a lot of evil things going on in the atmosphere besides the greenhouse effect and the production of ozone - and there appear to be enormous gaps in scientific understanding of how all the chemicals are interacting with each other and with sunlight.

This is the article I just read that started me thinking along these lines:

In the course of this discussion, while observing the shocking deterioration of the trees on the Cape since our last visit, Steve, who is endlessly patient listening to me rant about trees and climate change and now ozone, made the astute comment that something significant has changed relatively recently, and that is, the addition of ethanol to gasoline. Now, I had been under the impression that you had to have a special car and go to a special gas station to obtain ethanol, but apparently, it is already being added to regular gas in varying proportions. This came as quite a surprise to me and so I started looking up ethanol and what sorts of emissions might ensue from its combustion (practically nothing, according to industry organizations).

I found this excerpt on a Canadian site which is corroborated in many other documents too numerous to link to - but you can always google for more:

"Based on the current state of knowledge in this field, it can be safely concluded that the use of E10 (ethanol) would result in a 5-15% reduction of CO; a near-neutral effect for NO2 emissions; a fairly neutral effect for ozone in smog events; small increases in aldehydes during smog events; possibly large increases in longer-term average aldehyde (e.g., acetaldehyde) levels; small increases in longer-term average levels of peroxyacetyl nitrate; and a small effect on benzene emission levels, dependent on fuel formulation."

ACETALDEHYDE (possibly large increases)! Hmmmm, here's an entry in Wikipedia, linked below. But I want to copy this part in full because it gives me the chills.

Peroxyacyl nitrates, or PANs, are powerful respiratory and eye irritants present in photochemical smog. They are formed from a peroxyacyl radical and nitrogen dioxide, for example peroxyacetyl nitrate, CH3COOONO2:
Hydrocarbons + O2 + NO2 + light → CH3COOONO2
The general equation is;
CxHyO3 + NO2 → CxHyO3NO2
PANs are both toxic and irritating, as they dissolve more readily in water than ozone. They are lachrymators, causing eye irritation at concentrations of only a few parts per billion. At higher concentrations they cause extensive damage to vegetation. Both PANs and their chlorinated derivates are said to be mutagenic, as they can be a factor causing skin cancer.
PANs are secondary pollutants, which means they are not directly emitted as exhaust from power plants or internal combustion engines, but they are formed from other pollutants by chemical reactions in the atmosphere. Free radical reactions catalyzed by ultraviolet light from the sun oxidize unburned hydrocarbons to aldehydes, ketones, and dicarbonyl compounds, whose secondary reactions create peroxyacyl radicals, which combine with nitrogen dioxide to form peroxyacyl nitrates.
The most common peroxyacyl radical is peroxyacetyl, which can be formed from the free radical oxidation of acetaldehyde, various ketones, or the photolysis of dicarbonyl compounds such as methylglyoxal or diacetyl.
Since they dissociate quite slowly in the atmosphere into radicals and NO2, PANs are able to transport these unstable compounds far away from the urban and industrial origin. This is important for tropospheric ozone production as PANs transport NOx to regions where it can more efficiently produce ozone.

I'm trying to find out who is monitoring the atmospheric composition. It's an overwhelming topic.